note: This topic has been closed to new comments.
68 views
Feeling Nostalgic? The archives > Summer Festivals

I am WAY too old to go to this type of thing, but the Coachella lineup is out...here's the listing...

I'm not a "summer festival" guy, but at least if the bills are getting set summer is coming...

That looks good, but Bonnaroo looks better to me:

I would actually like to experience Bonnaroo once in my life. Maybe this is the year. I could be one of these guys
[image error] alt="description"/>
Nobody I know will go with me, however.

I'd go with you, Kirk, but I'm afraid of the big festivals. I'm afraid I'll have to sleep in four feet of mud and use a porta-potty you can smell from half a mile away. I'm not sure I have the stamina for the big festivals, except maybe Lollapallooza in Chicago, if I had a hotel room right across from Grant Park.

Oh, please, RA, you're not THAT old. I'm only a year younger than you, and I'm dying to relive my youth through summer festivals, illicit narcotics and four feet of mud. Come on, bro...you know you want to!

I'm putting some serious thought into Bonnaroo. Coachella's got some acts I'd love to see live, but making it out there in just a couple of months just won't happen. Bonnaroo's only 6 hours from where I live, and I've got some friends in Tennessee who always go. I think I'll join them.

I'm keen on seeing the following at Bonnaroo:


Seriously, if anyone wants to make a trip - that means you, Kirk - let's hash it out. Not a bad idea to talk about possibly going, I think.

You make it sound tempting, Gus. Can I borrow Matthew's sunglasses and check out the girls in sundresses?

Well RA, if you really want to wear sundresses, you shouldn't have to ask permission.

Hm...not sure if the sundress would match the sunglasses...

Make sure you have the right summer purse, too.

Some of the pictures I've seen from Bonnaroo make me want to go there. But then I wake up and realize I really don't want to put up with all of that. So there I am.

Send me a postcard?? Pretty please? :)

Mod
Where are these festival held? When? One is in California - is it during summer break? I'd totally go. At first I was going to say that I want to go see these before we have kids - but then I want to add that I want to be the kind of mom who brings a baby in a sling to concerts like this.

I'd consider Bonnaroo -- I have some friends going this year.

I don't like the aggressiveness of those crowds, though -- I didn't even go to Virgin Fest, which I could reach on one city bus, because of the combination of people + sun + heat.

Folk festivals are ok, but rock festivals seem to bring out a little more crazy than I care to be in proximity to...

SXSW in Austin is very laid back and easy to do -- especially if you live in Austin.

My problem with all of these is that inevitably, everybody you want to see is on at the same time, on opposite ends of the grounds.
SXSW too -- and you get stuck in lines outside each club, unless you've got a VIP pass...

I sure am a pessimist this morning.

I can make you up a VIP pass, Sarah Pi.

Virgin Fest -- the best place to get your groupies. Or the festival put on by Virgin Mobile: http://en.wikipedia.org/wiki/Virgin_F...

Thanks, everyone. I think I'm going to eat lunch and go enjoy the sunny cold day instead of being a grouch.

No not a real one. A fake one that just might work. Or maybe not. No, actually you shouldn't count on me for anything like that. A thought pops in my head and I put in a comment. Moving on now ....

I'm thinking about doing Coachella this year. It's awful pricey, though. I might just do one day.

Now for ACL price is no object. They had BOB DYLAN last year. BOB *#&*@!!$% DYLAN. My god I love that man. But that festival requires my being in Austin, which can take some finagling.

I'd love to know who thought booking McCartney at Coachella was a good idea.

Isaiah wrote: "But that festival requires my being in Austin, which can take some finagling."

Not anymore, Larry. Now it's violent ex-girlfriends hellbent on revenge.

I hear ya Jim.

I pine for the simple days of parking tickets and misdemeanor drug possession.

Here's to the good old days.

I went out to the country and got lost, which for some reason always puts a smile on my face. I found a river, and farms, and some very confusing roads. Then I found myself, and rode my friend's horse in the freezing cold.
Now I'm back, and in a better mood. Larry -- no faux VIP passes necessary, but thanks for the offer.

When I lived there I would often do that on weekends (drive around and get lost -- not ride a horse). The countryside around there is very nice -- especially up toward the Pennsylvania line. I lived in Harford County, a pretty nice area generally.

in my town they have a Haynes Apperson Festival and here are the acts:

Rewind
Mike and The Spikes
Jukeboxx
the one dude with the mullet and his 80's cover band
the guys that play all the Skynyrd music
the creepy, weird bluegrass family

:) If any of you make it to Bonnaroo... you HAVE to see Todd Snider perform. He's one of my favorite live performers - easily makes the top 3 faves.

I sure do wish I knew who y'all were talking about.
*sigh* and a little bit not.

I'd love to hit Coachella again this year but that's just not going to happen. I'm with Gary though- who the hell decided that anyone anywhere had any desire to see Paul McCartney? I'd like to see him, but only if I'm walking down the street with a pie in my hands.

I wonder what this year's Sasquatch line-up is going to look like? It's been nearly a decade since I've been to the Gorge and it's still my favorite venue.

I don't get the Paul McCartney thing either...do you want your grandpa at coachella?

yeah, i thought he was gonna be at Couchella

So, what's your beef with "old" people. Random?

That's a cryptic remark. Could you be more specific?

As in "Tales from the Crypt-ic"?

No, I'm also "old." Not really wanting to be specific about that.

I happen to love the elderly. I find them to be a lot more interesting than most of the people my age. Strange, I know.

I would go to Coachella just for MBV. 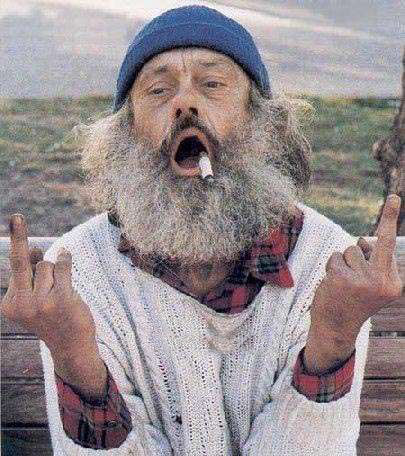 Mod
I so wish I had something clever to add to this thread. All I can do is this:

Old people people are more appropriate at Denny's, maybe, and at the library.

i love old people for talking to and hanging out with, prob not for moshing with to Rage Against The Machine at an outdoor music festival. That being said, my twenty-something kids do not want to see ME there singing Renegades Of Funk at the top of my lungs and throwing chunks of sod at the security people. so in many instances I AM THE OLD PEOPLE NO ONE WANTS THERE

screw em, i am lower-middle class and can afford a ticket, a bowl of jambalaya from the food vendors and a Starbucks on the way home

I know a 50-something guy who told me once he went to a rave here locally. Said he was clearly the oldest dude there. One of my younger friends, who also knows this guy, said what's weird is not that he was there, but that he still thinks of himself as a "dude."

Sally -- that image was spot on.