So, whatcha wanna do?

anything is fine!
Here are a few ideas:
high school
vampire
harry potter
hunger games
spy
we could combine two roleplays in one

Hmmm.... Since I'm a little obbsessed, I think we should do the Hunger Games! :D

Yes I wanted to do a hunger games rp with someone!

Oh my gosh, me too! I'm so glad I'm finally gonna be able to do that! *Dances* So, do you wanna be the girl or the boy?

Ok, I'll be the girl then. so plot? romance? friends?

Okay! Hmm.... Do you want to do romance? 'Cause if you want to we can. I honestly don't mind. And what year should it be?

I don't mind romance as long as it doesn't go any farther than kissing.
hm...what year do you want to do?

Yeah, same here. *Nods* Then sure, I guess we can.
Hmm..... thirteen! Just because I'm obbsessed with that number!

Hmm... Same, then we wouldn't have to do the other tributes picking for our districts. What district do you wanna do?

ok.
Here is my character:

Hold on. I'm doing mine but my computer keeps spazzing. :/ 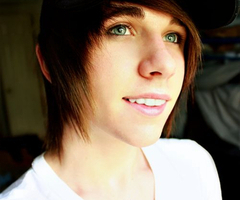 Eye Color: Light Green
Hair Color: Dark brown
Height: 6'1"
Personality: Ky is a flirt, it is admittable. He doesn't like to follow rules; in his opinion, they're optional and only suggestions. "Rules were meant to be broken," is what he goes by now and will probrably always follow. He's confident and loyal, but the kind of vibe he gives off kinda makes you think that he isn't very trustworthy. He is sarcastic and very charasmatic. He is observant and tries to take up for anyone that needs it. He doesn't talk about himself much and when he does, he has a tendency to ramble on and on, because most people just don't care to stop him. He does know how to shut up, though.

Buy Ky also has a soft side that not many people see. He's passionate about music, drumming being one of his favorite instruments. He's afraid of regection, especially if he's trying to ask a girl out that he actually cares about and has known for a long time. He is compassionate and sympathetic, known to shed a tear or two if he is really hearing a sappy story.
Strengths: Knives and anything to do with stone; His hands and feet; Smarts
Weaknesses: His being a smart aleck; Being too threatening against the Capital and Careers. And a bunch of other stuff.
Token: Waistcoat watch given to him by his father when he left. It makes a loud clicking sound every eight hours. (view spoiler)[ [image error] (hide spoiler)]
District: 12

Haha you were more detailed than me.

Nellie stood in the crowd of 17 year olds at the reaping. She took a deep breath knowing that she could be chosen. She looked over to the the crowd seeing her father watching. He looked at her and gave her a weak smile. She looked away and stood still hoping for the best.

Ky looked straight ahead as he stood in the crowd of other boys his age and he kept his face expressionless. Blank. If he did show emotion, he was end up crying dramaticly. That wouldn't look good on the screen. He glanced over at his little brother and sister, giving them a small, sad smile. His parents were crying siliently, seeing their son there. But they knew that if he won, their other children wouldn't have to go through that. They would be so happy if Ky won. He swallowed and looked back at the stage, taking a deep breath as he waited.

Nellie shivered as she watched their district lady (forget what you call her) walk up on stage and recite the same speech said every year. After the speech she goes to the glass bowls to pick out a boy and a girl. Nellie crossed her fingers as she picked out a name from the girls bowl. The lady looked at the note and looked up, "Nellie Real." Nellie froze and looked around as everyone looked at her. She slowly walked up to the stage.

Ky kept silent and so did everyone else in the district there. No other girl spoke up for her, which was expected of. No one ever wanted to be in the Games, which means no volunteers. The announcer woman clapped happily, as if pleased by the girl she drew. She reached into the boys bowl, seeming to play with the paper before she drew one. He knew he'd get picked. The teserae made his odds much less favorable. "Ky Reyes!" she announced in her cheerful voice. Ky walked slowly up to the stage, feeling numb and near tears but his head was held high. He could see his sister sobbing as he reached the stage.

Nellie stood still on the podium as she watched Ky walk up. Nellie looked around at the silent crowd and controlled her tears. She couldn't show herself to be weak among her own district. She knew that they need a win, and she knew that either she or Ky will have to do something. She sighed as she looked at her father, who showed no emotion. He just looked at her with a blank face, trying to control tears also.

Ky sighed softly, looking at the box with disdain. I hate you, he thought, then glanced over at his family. He couldn't see them well, so he gave up looking after a moment. "Well, tributes, shake hands!" said the announcer woman cheerfully, smiling widely as if it was the happiest occasion in the world.

((Yeah. I'm just watching a movie and trying to find my cottage cheese. I have destractions so...))

Nellie looks at Kye and slowly held out her hand. Her hand shaked slightly as she looked down at the ground.

Ky held his hand out Nellie and took it in his. He didn't note her shaking hand but he knew it was there. His hand was shaking too, so they were both scared. He shook it slightly, squeezing it encouraginly. He didn't want her to be a mess on the train. It would be so awkward.

Nellie shaked his hand and pulled it back to her side. She was led to her cabin for the night before she had to leave to the Capital.

Ky was led to his temperary cabin for that one night to have what he would compare to sweet dreams the years after than the nightmare that was to come ahead.

Nellie sat in her cabin. Her father walked in for the limited time he had to talk to her. Nellie looked at him, tears rolling down his face. She ran over to him and hugged him. He hugged her back gently, "Everything will be fine. You will be back home safe and sound." She looked at him, "Do you really think I can win?" He looked at her and smiled lightly, "I believe you can and I will hope you will. I don't want to think anything else. Just that you will be back with me, at our small home like always." Nellie smiled and hugged him, "I love you dad." He responded back saying quietly, "I love you too." The guard said that time was up. Nellie's father gave her one last quick hug and walked out of the cabin.

Ky sat in a chair in his cabin, staring at a crack in the wall when his family walked in. His six-year-old sister ran to him, along with their five-year-old brother. Tears streamed down their small faces as they hugged him hard. His parents looked at him with sadness in their eyes.
"Ky..." his mother started, choking on tears.
"Don't cry, Mama. I'll be fine. I'll win. I'll get sponsers as easily as if I was asking for them," Ky said confidently, smiling softly at them all.
"Don't leave! Don't die, Ky!" sobbed his sister. His brother couldn't talk, since something was wrong with his speach, but he nodded like he understood.
"Don't cry, Calla. I'll win as easily as if I was playing tag with you," he said, hugging them tighter. He hugged his parents hard with all his might and then their time was up and they had to leave. He watched them as the door shut and tears started to finally flow steadily from his eyes.

Nellie sat on the couch tears rolling down her face. She took out her locket and looked down it remembering her mother. She looked at it for another moment and then put it away. She leaned against the couch and closed her eyes, her cheeks still wet from her tears. She slowly fell asleep.

Ky sat down on the couch and pulled out his watch, turning it over in his hands. It clicked once and he smiled softly, the familiar sound pleasant to his ears. He swallowed deeply and laid back, falling asleep with it clutched in his hands.

the next morning the guard knocked on the door loudly. Nellie woke with a startle. The guard told her she had to get ready for the train. She put on a tangtop and jeans and walked out of the cabin with her stuff.

That morning, after Ky had dressed into a flanel long-sleeved shirt and old jeans, he walked out of the cabin with his watch still firmly in his hands. He was not letting it go even if the world was going to end. Not even the Peacekeepers would take it away from him.

Nellie followed the guards to the train. She got in and sat down. She sat beside a window to look outside.

Ky sat down a few seats away from her, looking at his watch.

Nellie stared out the window gloomily and sighed. She looked at Ky for a moment and looked away

((Yeah, I am. I was just deffending someone or I would've responded sooner.))

Ky turned the object over in his hands, then let out a heavy breath and and then looked up at Nellie. "So... Are you hungry, because I am," he said, raising an eyebrow at her.

"So you're gonna starve?" Ky said, getting up and walking to the table. He grabbed a biscit and took a big bite out of it, feeling like he hadn't ate in days.

Nellie shrugged, "I'm used to it."

"Yeah, so am I. That's why I need to eat something," Ky said, then leaned back and patted his stomach and made a face that looked like he was gonna die.

Nellie smiled a little, "I wish I could be like you right now...just so calm."

"Just try. Acting isn't that hard," Ky said, grinning a little as he took another bite.