Another 90210-er may be making a stop in the Twilight zone.

I'm hearing that filmmakers have been considering the idea of casting 90210 star AnnaLynne McCord as Heidi in the upcoming New Moon, the much-anticipated sequel to Twilight.

Heidi isn't a major character in the book, but McCord definitely has the gorgeous looks to pull it off.

The character is a "fisher" who brings humans to the Volturi vampires to eat. She's also known as "bait" because of the way she uses her stunning looks to attract humans. In her brief appearance in the book, Bella describes Heidi as having "exceptional, unforgettable" beauty. She has stunning legs, long hair and violet eyes.

Sources tell me McCord has auditioned for the role. "It's not a big part," one of the sources said. "Heidi would be more like a cameo."

McCord should feel pretty comfortable on the set. Her 90210 costar Kellan Lutz—and rumored real-life boyfriend—played Emmett in Twilight and will return for the sequel.

McCord's rep did not immediately comment nor did a rep for the studio, Summit Entertainment.

Director Chris Weitz is expected to start shooting the flick with Robert Pattinson & Co. next month in Washington state and Italy with a Nov. 20 release date. Summit has yet to make any major new casting announcements for New Moon. However, as I exclusively reported, Dakota Fanning is in serious talks to play Jane. 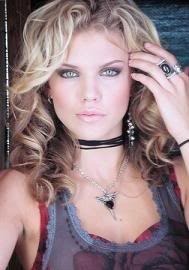 She would be brilliant, in my opinion!

My friend isn't going to be too happy about that.
But they make such a cute couple! I love 90210!

AnnaLynne McCord Confirms New Moon Talks
FEBRUARY 10, 2009
AnnaLynne McCord, who was recently caught snogging with Twilight star Kellan Lutz at the Playboy Mansion, has confirmed that she is in talks to play the Volturi “fisher” Heidi in New Moon–

Hollyscoop caught up with AnnaLynne at the “Kiss For A Cause” event in Santa Monica where she confessed she’s going to hear back about the role “next week.”

“My fingers are crossed though,” AnnaLynne told Hollyscoop exclusively. “I’m a fan of the books as are my 14 and 12 year old cousins who are obsessed, they would freak if I got it. And I just want to do a film with a small role during my hiatus and then just have the rest of the time off cause I need a break, I want to go to Europe!”

She's propbably will get the part. She could play a good Hedi.

90210 star AnnaLynne McCord is still in negotiations to play Volturi temptress Heidi in New Moon, saying there are still some scheduling conflicts to work out. But what is quite interesting is that she revealed in a new MTV article she almost played Rosalie in Twilight–

Something that few Twilighters realize, however, is that the vampire-loving actress nearly played Nikki Reed’s part in the original film. “They wanted me to play Rosalie,” she recalled. “I met with the producers when ‘Twilight’ was casting, the original. I was on ‘Nip/Tuck’ at the time. And they were like, ‘We’d love to have you in this little film we’re doing called ‘Twilight,’ but the family only has small roles.’ They were like, ‘It shoots in Oregon, so you probably couldn’t do it anyway.’ And I was like, ‘If it shot [in L.A.:] that would be cool.”

“Then this little film ‘Twilight’ blows up, crazy,” she laughed, enjoying her seemingly predestined participation in the franchise. “So, I came back in for a [recent 'New Moon':] meeting and was like, ‘Hey, remember me? I supported you way back when!’ I’m like, ‘Let’s do this!’”

I could she her playing Rosalie. Her charactor in 90210 is just like Rosalie. But Nikki Reed did do a good job anyway.

Yeah, she would be a good Rosalie and Heidi!

I hope she gets it! I can't think of anyone else to play the role.

That super model that's dating Tom Brady. She has been in a few movies

Then she's probably too old.

o gisele is so pretty!.....but everyone knows gisele....she would be good i think

I still have know clue who you guys are talking about.


The sequel to blockbuster Twilight, New Moon, hasn’t even started filming yet, but already there are shake-ups involving the cast of the film.

AnnaLynne McCord, who was slated to play the receptionist to the Volturi vampires in Rome, Heidi, tells OK! she’s no longer going to be in that role.

“I am so disappointed but it doesn’t look like it is going to happen with my schedule,” she revealed to OK! at the L.A. premiere of Fired Up on Feb. 19.

Fans of the 90210 star might still have some hope, as she adds, “But keep your fingers crossed for me. I hope that it still does!

I hope they can figure something out. I really like her as an actress.

me to and I think she would be a good Heidi...

I don't get how their having that much schedualing problems, Hedi is like in 5 sec. of the movie. I know 90210 flims like everyday, but they could fly her in for 1 day and she wouldn't miss much of 90210.

She'd be great! She would have been a great Rosalie in my opinion!
She really love's The Twilight Series, so I think she deserves to try be in it!

Yeah she could have played Rose.
But I'm glade she's in 90210 and I like Nikki Reed.

I love her in 90210!
I just think AnnaLynne would look more natural 'cause her hair is natural blonde!(I think)
And you really tell Nikki isn't.
That and AnnaLynne is really at being hostile!

True...
But I'm so use to picturing Nikki as Rose.

She seems really nice in real life, but the charactors she plays... lets just say there a lot like Rose. She said in a interview somewhere that she always tries out for the nice girl role, but then they give her the villians lines and tell her they like her better as that.

New Moon has its Heidi.

I can exclusively reveal that Canadian supermodel Noot Seear has won the coveted role of the beautiful human bait in the Twilight sequel.

Heidi is described in Stephenie Meyer’s novel as a “fisher” who brings humans to the Volturi vampires to eat. She has “exceptional, unforgettable” beauty, which includes stunning legs, long hair and violet eyes.

If y’all remember, 90210 starlet AnnaLynne McCord auditioned for the role, which insiders have described to me as being more of a cameo than anything else.
So who is this Noot Seear?

She began modeling when she was about 13 years old and moved to New York City “for more exposure,” New York magazine has reported.

Since then Seear has appeared in spreads in Elle, Cosmopolitan and Vanity Fair. Her ad campaigns have included Giorgio Armani, Calvin Klein’s CK One fragrance, Vera Wang Bridal and Pantene Pro-V.

Seear’s manager could not confirm the casting, but tells me, “She has auditioned and is in consideration with the studio for the role.” 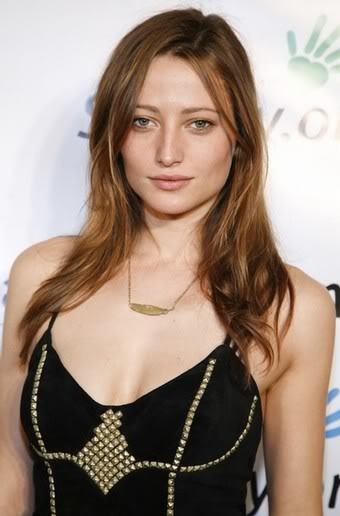 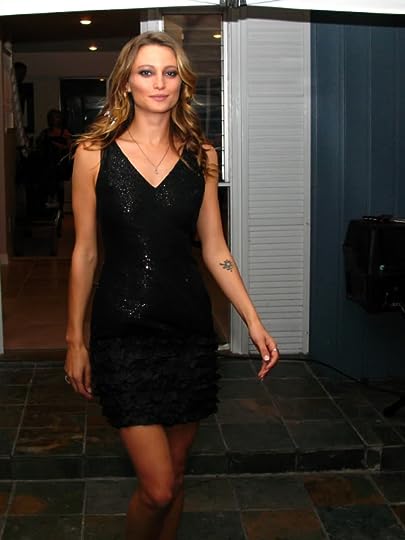 I like Anna better, but she'll do for the whole 2 minutes she'll have her moment!