11 views
One x One Roleplays > *Meanwhile, inside a Halo Prototype Scarab's simulation room..* (Cinderglacier and Cashmere)

((thanx it helps and such))

SO.. What did You have in mind?

I am up for the following which is based off Gaming or Book or Comic Series's at random:

For things not based off of Anything:

Paranormal, Really, anything Fantasy and Paranormal.

oh marvel sounds interesting how about we do marvel with maybe one of the two team members from the avengers and i guess do a romance thing off that? but that idea really does sound good

OH BAH! Gotta go, sorry to kill the introductory spirit of our RP

Ms.Cashmere the one whose fallen in love with Cato wrote: "oh marvel sounds interesting how about we do marvel with maybe one of the two team members from the avengers and i guess do a romance thing off that? but that idea really does sound good"

When i come back, then we'll get things settled out.

lol its kay we can do it then

yeah i am but can i ask you something?

nothing to horrible i promise just have you had when you ever went on good reads where its like your able to do things for several hours but then it crashes on you and then you can't get back on till way later?

Oh that's happened to me before, Especially at the wrong times... Le sigh.

It was doing so before as well.. I couldn't get on.

I am both, Your Arguement is invalid.

Right, I'l make one based off of one of my old Chars, moment.

oh so its a staring constant now? i can keep this up for ages on end *stares back without blinking continously*

*Does the exact same thing, until Your set ablaze by eye contact with the Yoshi stare*

Skill/Occupation: Is able to manipulate Matter and elements of many kinds, he can even form Matter and Antimatter, He also can use Teleportation, and absorb (As well as use absorbed energy) Energy, he can even send it back, for example: He gets hit by a gigantic Searing beam, he absorbs it all, and fires it back at the one who attacked him with it, he is a very Talented swordsman and fights with his Katana, and he will use it's Scabbard as well, and has Nearly invincible Reflex and strength, how? He Manipulated the matter he is made out of, and after some workings, he gained the physical prowess he has now, He is a Member of the Avengers, but usually keeps to himself when not called upon to do some kind of Heroic Act.

Picture (And Personality, Also, since it won't show his Lower body, he wears Black leather pants, and Black Chain boots): 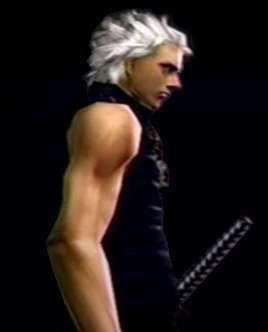 To be short, He is a Kind hearted and protective person, really, but when angry, he is not a Good person to be near, however, he always Speaks and acts strangly in some way, he is also a lone type of individual, but there are exceptions.

History/Info: He is a mutant, and, as for his history, details are hazy, because when he gave himself his physical ability, he accidentally affected the matter in his brain, causing him Memory loss, coincidence (Alot of coincidence at that) Leaves most of his memory in-tact, however, he does not remember Almost any of his past, but often catches glimpses of it when lost in thought, although it happens even when he does not focus on pondering things, The only thing he remembers is his Katana being a family Heirloom, and his name being 'Tarius' and he doesn't know how he inherited the Katana exactly, but he has named it: 'Memory' or 'Memories', he has named the Katana's scabbard: 'Guardian' or 'Protectors', Nowadays he wanders the world, you can usually find him ontop of a Hotel roof or the roof of some other building gazing down to the area below when he IS lost in thought, his current goal is to retrieve his memories, and, he has attempted it numerous times, with no luck, at this present time, he is confused, unsure of what to do, an aimless person, really.

Other: He is aware of Magneto's attempts to form a whole Faction of Mutants, but refuses to Stop their doings or Join their cause, he simply does not take part at all, believing Magneto is right about Humans, but he does not think Killing Humans is the way to go.

seriously? Your acting like a 5yr old i aint aruging but this last time only uh huh! so no more or i actucally will do hocus pocus


lol again? *stares still but blinks* dang it i thought i could win -.- but still now you making me want to use maximoff last name for my charrie even though were making our own its like when you mentioned it i kind of wanted to use it

Oh come the heck at me. *Picks up halo 3 Gravity hammer*

lol a hammer seriously? come on?! I can do better than that *takes crossbow and trick arrow puts flames on the trick arrow and shoots smiling innocently* now look whose goint go win >:D

*Swings hammer, it produces some kind of Shockwave, blowing away the Arrow* GRAVITY hammer, this thing can produce Waves of force, Pal.

oh you did not just do that your paying for that no one ruins my arrows or my magic and gets away with it sorry heck no aint happening -,- *produces lightning and makes your hammer go bye while producing firestorm*

Pathetic. *Grows Icy wings and channels together a Water-Hailstorm around him, freezing the whole ground around him.*

*Points Katana at her* Don't bother.

*He only flinches as the wings break off, but newly shaped ones Grow, and he turns into a Shadowy entity with stranger Butterfly-like wings, causing the entire place to go Black, the ice to turn into Black ice, with flashing dark colors*

*Summons another Katana* I too, use mythic ability.

now let me get this straight you just went from ice wings to now becoming a fallen angel with black wings? your confusing me idk which way your going now


yeah i can see that -.- keep summoning it and i'll keep making it disappear

Glad im confusing you. *Hand turns into a Shadowy Scythe and he Flies down at you*

*He Vanishes, A Scythe goes up you from your back.* Nope.

And i'l simply make another.

Sure it isn't.. *Scythe reverts to hand*

Name: Mysterious Sorceress of darkness & light
Real Name: Bella Maixmoff
Skill/Occupation: She can use both dark and light magic. Bending it to her very will. Anything she touches it will automtically be that element that she controls. Uses blood magic but uses it very wisely. Since it comes with a price. But mostly she sticks to dark magic. Only uses light magic to heal by using different types of liquid. Also using compulison to her will. And lastly can enter a person's body and making them see the worst of their memories and nightmares. She is on the Avengers but tends to do other things beside's that
Picture & Personality: http://www.google.com/imgres?q=teen+g... She is rather kind and caring type of person. At times can be rather annoying and mean. Strong willed and hearted is what she is best known for. Her trust worthy varies with the person.
History/Info: She has a past from okay to being horrible. Bella was found at an orphange at the age of five. Finding out a guy by the name of magnus got her bringing her home. She finds out she has other family members. Her sister which she got the ability to tether with realities. LAter learning she was unstable and had horrible things happen when she went to a asylum. Thinking the experiments she had would be okay. Not realizing her memory was wiped clean and put different memories in.
Other: has a rose tatto on her right inner wrist with the saying underneath love only matter if you make it matter.

i be suprise how so? i never take long as only maybe 45min or an sometimes an 1hr i just was trying to figure out to make the history and perfect or something like it

Ms.Cashmere the one whose fallen in love with Cato wrote: "i be suprise how so? i never take long as only maybe 45min or an sometimes an 1hr i just was trying to figure out to make the history and perfect or something like it"

That's the thing, history is a difficult one to make up.