It looks like we just can't get enough of the Cynster family and are reading the next book in the series! Please join us for questions and discussion of A Rogue's Proposal (as well as other topics :) )

Great! I need to get the computer going so I can out this in the kindle.

I'm still lurking. Have not been able to finish Scandal's Bride yet. But I'm working on it.

Maybe I'll get to this one. If I catch up.

Ready to start tomorrow(my time , the day after for you)?

Oooh, glad you reminded me!

and then I'll start on this. You want to do the first set of questions, shosho? That way ya'll won't be waiting on me?

Y'all are killing me!! I can't seem to finish Scandal's book and y'all are starting the next one.

I'll do the first set but probably tomorrow , I can't read anything other than my dance party book , it's sooo good

That's fine! I'm so glad you're liking your dance party book! I loved that story.

That suits me too, I'm baking cupcakes to take to school for my son's birthday.

Happy birthday to your son :)

Happy B-Day to your son, CaroB!

Happy birthday to him!

Thanks everyone!! This is what I ended up with for Fraser's birthday (he's a big fan of board games - so I made it into a sort of Snakes & ladders set): 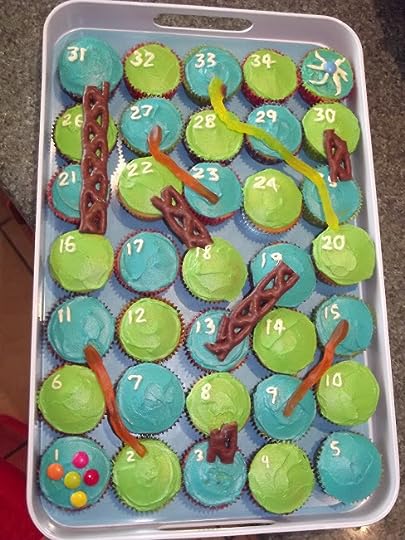 The last one was supposed to be a star, but I stuffed up the piping, so it looks like a weird spider-looking thing instead, lol!

That's cute! You did a great job on those!

Cute, CaroB! Can I put it on my Pinterest Cupcakes Board?

Thank you :-) I had fun doing them, but they're definitely not Pinterest worthy. Fraser got a big kick out of handing them out in class though.

I'm on ch 2 and I had to laugh when Demon instinctively KNEW it was a woman on the horse cause of the shape of her bottom :)

LOL, talk about attention to detail!

Susan (susayq) wrote: "I'm on ch 2 and I had to laugh when Demon instinctively KNEW it was a woman on the horse cause of the shape of her bottom :)"

Oh, yes. I liked that part. He's paying attention where others aren't. LOL!

I am soooooooo putting those cupcakes on Pinterest, CaroB!

A true Cynster man - he knows a woman's anatomy ;)

**hee hee** You are sooooooo bad, Susan! Accurate, but bad.

I'm going to start in a bit , I got to work an hour ago and have to actually work a little bit , but I'll post the first set of Qs (My)tonight.

Ok well this month flew by! I didn't realize it was the 20th already. I don't have a copy yet hopin' to get it ordered this weekend and if I do it'll be like a week or so til it comes... sorry guys! :(

That's ok, Kit. Join in whenever you get it.

finished my 6 chapters , I'm working on Qs.will post them in a bit

1-Demon is the only Cynster so far who has no intention getting married .How long before he breaks his vow? By the end of chapter 6 it seems it'll be real soon.Do we know why he is called Demon?

2-Realizing that rider is a woman only because of the shape of her bottom was priceless . If I ask my husband about how a woman looks like the first thing he'll describe is her butt!!! Are all men like this? or is it just Demon and my husband?

3-Is Flick her nickname?? and not only a name she used for the stable? I don't like it!

4-It doesn't seem there is any attraction on Felicity's side to Dillon .Do you think there is anything on his side?

5-The story that Dillon had given her had too many holes , why on earth she had believed it?!Do you think Ickley has been killed? what do you think about mystery so far? interesting ?

6-I know nothing what so ever of horses racing betting and stuff like , I couldn't follow the conversation Demon had with the other owners .how about you?

7-He thought " From now on , he'd lead and she could follow." Just a little bit later she said " come one" and he followed . I'm totally enjoying their interaction so far. Also the fact that he was jealous of his horse , LOL!!Do you think she can hold it much longer or is she going to be one those of ladies?

8-Ah rain and an empty cottage , a recipe for being comprised and a forced marriage , I hope it doesn't go that way! do you think it will? The mouse and scared female a bit too cliche I think !

1. Don't know why he's called Demon. I want to know though. It seems that all the previous Cynster men had nicknames that I figured would be cause of their roguish behavior but it turns out it was cause of something else. And yes, it seems like he's already changing his mind about marriage. I wonder how Flick will see this.

3. I'm curious how she got the nickname Flick. It's kind of sassy.

4. I wonder if dillon thinks she's attracted to him cause she always helps him. But I don't think it's there.

5. Maybe Flick was just so overcome with worry that she didn't notice the holes? I like the idea of the mystery. Kind of gives it a mafia feel with the whole syndicate thing. Or is that just me projecting my secret love of all things mafia to this? LOL

6. I followed it but didn't understand it all. I'm not much in horse races or horses in general.

7. My guess is that she'll fight the attraction cause she's going to think its part of the plan to spy on the Bletchley guy. And of course Demon is not going to be upfront with her about his feelings so it's going to take a while.

8. I liked the mouse and her being scared. She comes across strong and not afraid to be seen spying, but her fear of the mouse made her vulnerable and more girl's. At least it did for me. I also hope they aren't forced to marry cause of being caught in the cabin. That wouldn't make either of them happy regardless of how their feelings are going.

Just finished ch 12. However, I'm sitting in the stadium waiting for the football game to start (in 1 1/2 hours) and then finish. I'll post yhe questions when I get home tonight.

Great Susan, I'm almost there too.
BTW I'm not getting any notification for this thread, no email nor the red button on top of GR.

My email notifications have been slow all day. The game finally started. I managed to read most of ch 13 while waiting LOL

LOL! I have magic in the tips of my fingers! Who knew?

9. Well! There was almost a forced marriage here. Would you have guessed that she would be able to head that off like that? What did you think about Demon being upset that he didn't get to marry her?

10. I think Stephanie Laurens did an amazing job writing the dance and kiss between Flick and Demon. I could feel the magic. Do you think she'll agree without a reason?

11. She wants to marry for love. Do you think she'll be able to get the words from him?

12. Demon turned down a night with the ladies to get back to Flick and she wasn't there. Do you think she's on the right track?

13. "Fate. Disguised as Lord Selbourne." will this precipitate him having to say the words cause they'll be forced? Will she weasel her way out again?

We are at this self service car wash and my husband is washing thw car, i'm going to try and answer the Qs on my Mobile

9 that was one of best scenes in the book.I fell in love with her, she is one of the best heroines in HR romance . And demon is pouting haha.It was was a great way for him to understand how much he wants her.

10.no she is too smart and confidence to say yes without a reason

11.i hope so but none of the Cynster men have said it before, so I don't think he will say it either.

12.she's got him , completely and totally so I'd say she is on the right track

13.he doesn't know her so it doesn't matter that he saw her. I thought he said fate because it made them stop, I might be wrong.

No he didn't, I checked Susan's review to make sure.

How long before you get your book Kit★?

I finished chapter 18 it's really good if it doesn't disappoint me in the last 20% I have to say this one is the best so far.
And I read the sex scenes can you believe it?!?!