The Next Best Book Club discussion

The secret is in the tower. The problem is the beast. The answer is two thieves.
When a destitute young woman hires two thieves to help save her remote village from nocturnal attacks, they are drawn into the schemes of the wizard Esrahaddon. While Royce struggles to breech the secrets of an ancient elven tower, Hadrian attempts to rally the villagers to defend themselves against an unseen killer. What begins with the simple theft of a sword places the two thieves at the center of a firestorm — that could change the future of Elan.

SAMPLE REVIEWS (All Reviews)
"Avempartha is another strong entry that exceeds its predecessor in both depth and scope. The Riyria Revelations is shaping up to be one of the most original and entertaining fantasy series I’ve seen in years on par, and often better, than anything any of the major publishers have to offer. Get reading people!" — King of the Nerds Fantasy Reviews

"I HIGHLY recommend both books, and cannot wait until the next is released! I have to also say that Michael J. Sullivan is quickly becoming one of my favorite authors!" — Ramblings & More

ABOUT THE SERIES
Avempartha is book two of the multi-book saga: The Riyria Revelations. Instead of a string of sequels this six-book fantasy series was conceived as a single epic tale divided into individual episodes. All were written before the first was released so that plot elements are intertwined, yet each is self-contained and can be read independently from each other. Avempartha can be enjoyed by those who have not read the first episode: The Crown Conspiracy. 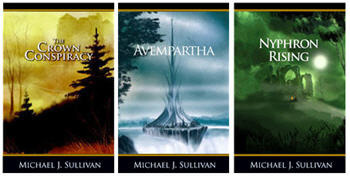 Michael's Publisher has finalized the list of stores for the Release of his second book. Ther are 21 of them so far. You can find dates/times here

For those who have pre-ordered Avempartha....First let me say..thank you for your support. I've recently re-read it after being away from it for some time and I'm very pleased with the way it came out and I think you will be too.

Secondly...There was nearly a disaster in that with only a few weeks before the book was to be released the publisher informed us that economic downturns and tightening credit lines had put him in a cash flow situation where he could not print the books!! (Printers get all their money up front and it can be a sizable investment)

By terms of the contract he owns the rights and has up to one year from date of signing to put it into print. (A very common contractual item). So that meant he had until October before he would be in violation of contract whereby the rights would revert to Michael. The publisher had already invested substantial money into the book for editors, proofers, layout, cover, advertising, distribution etc and so he wouldn't just release the contract.

Michael and I really did not want to stop the momentum of the series so we "cut a deal" with the publisher and essentially bought back the rights whereby we'll pay him a royalty to re-coup his investment.

The reason I'm telling you all this is that with the change in ownership rights the ISBN's have changed from the old publisher AMI to the new publisher Ridan. So Amazon and bookstores will be cancelling your Avempartha orders (if they haven't already), since the ISBN's you ordered from won't ever be printed.

The good news is you can still pre-order but need to use the new ISBN. So use this link and just re-order.

If you prefer, you can still order signed copies from us at the Good Reads price of $9.95. I'll have a link established just as soon as I have books in my hand. We are doing some "rush printing" and even driving to PA to pick them up to avoid shipping delays so the second I have books ready I'll let you know how you can get them from us. (This by the way saves us money because 50% of the price doesn't go to the distribution channel ;-)

At this time I think we will hit April 1, if not then very close to it - only delayed by a week or so.

We regret the inconvience but are happy that we'll still be able to provide you this book now instead of wating for October.

If you have any questions please feel free to ask here or send me a private message.

Again thanks all for your support.

Back by popular demand...yes we are offering a "special discount" on signed copies of Avempartha direct from us. There are even some "smart cookies" out there that found the link only hours after I posted it this morning as I had a number of orders that have already come in!! We were driving home from PA with a shipment of books when the iphone kept vibrating as orders came in. It was all very exciting!

So we are home now with books in hand and we are ready to ship. (I already mailed out the first batch - thanks all for your support).

If you want it "dedicated" to a particular person - don't forget to fill in the box - if you only want an author's signature without personalization - just type in the box "Author Only" so I know it wasn't overlooked. If you want no signature - just say "None".

Received an incredible reviews on Avempartha
Please take a look, and post a comment on the reviewer's blog they deserve to know their talented work is appreciated: King of the Nerds

The Next Best Book Club