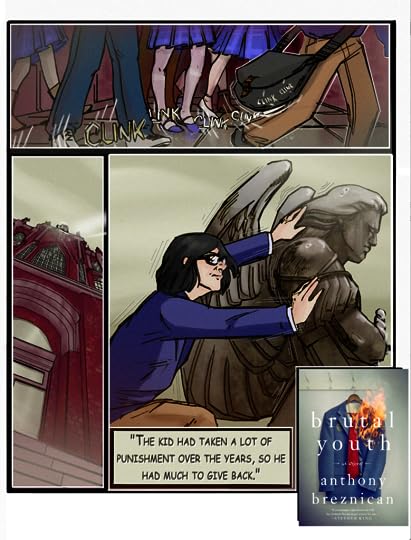 With school back in session, the artist Cassandra Siemon has created illustrations to accompany excerpts of the dark coming-of-age novel Brutal Youth by Anthony Breznican, which is new in paperback.

The book is about dirty deeds, broken hearts, and double-crosses at a crumbling Catholic high school that has become a dumping ground for troublemakers, losers, misfits, and the unlucky. Don’t let the blazers, ties, and plaid skirts fool you. There’s nothing civilized happening within these walls.
As the book opens, one of the students who has been savagely picked on for years finally snaps in a flash of violence and finds himself on the run. After hiding out on the roof, he discovers there’s nowhere to go – except down.

But he wants to see who else he can take with him.

The kid had taken a lot of punishment over the years, so he had much to give back.

A steel hatch on the roof of St. Michael the Archangel High School shuddered, then burst open, and the boy crawled out and collapsed against the gritty tarpaper surface, kicking the lid shut again with one sock-covered foot. He wore only his uniform gray slacks and a wide-open button-down shirt, streaked with blood that wasn’t his. A black canvas book bag hung over one shoulder, swinging back and forth as he scrambled to his knees. He pressed his weight against the closed metal door to stifle the hollering and pandemonium rising from beneath it.

Next to the steel hatch was a bucket, steaming with hot tar. The janitor had been using it to seal sections of loose shingle that had been leaking water into the school during every springtime rainstorm. A grubby tar mop leaned against the bucket. The boy shifted his heavy bag and scooped up the mop, wedging it between the handles of the hatch, locking it shut. Then he fled back across the flat roof toward the ghostly concrete statues lining the edge.

The row of saints had stood watch over St. Michael’s for as long as anyone alive could remember. Thomas, the doubter; Joseph, the foster father; Anthony, finder of lost things; Jude, devotee to the hopelesss; Francis of Assisi, the lover of nature, who had a small concrete bird in his outstretched hand and a real drip of birdshit on his concrete head. At the center archway of the ledge, high above the school’s main entrance, stood an even larger statue of a warrior angel, St. Michael himself, wings spread and sword raised against the satanic serpent being squashed beneath his foot.

The boy on the roof was named Colin Vickler. Not that it mattered. This was the end. This was good-bye. There was nowhere else to hide. He climbed up onto the short ledge, first steadying himself on St. Michael’s wing and then hugging its torso as he tried not to stare into the boneshattering drop below. Behind him, the steel hatch shook again — a rumble of thunder on a sunny, spring afternoon. He heard screams rise from the open classroom windows on the face of the school below. Even out here, on the edge, he was surrounded.

He slumped against St. Michael, pressing his open mouth against the concrete figure’s arm to make himself stop crying, tasting the stone that had weathered away to dust. The statue lurched, as if withdrawing from him, and he fell back as pieces of the crumbling base tumbled over the ledge.

Peering over the side, he saw a small group of classmates in gym clothes lingering on the school steps. The bits of stone lay scattered around their feet, and they stared up at him, shielding their eyes against the sun.

One of them pointed and said, “Hey, I think that’s Clink.” Another shouted: “Jump, Clink!” and the rest of them laughed. A girl’s voice rose up in a singsong: “Cliiii-iiiink!”

Vickler stood up straight, staring back at them.

He rammed his shoulder against St. Michael. He beat the saint’s back.

He grabbed the figure’s sword-wielding arm and rocked him back and forth, cracking the mortar. The statue lurched, and the rusted shaft of pipe protruding through the base cracked loose, splitting the serpent free from the avenging angel’s foot.

St. Michael tipped off the ledge and spiraled to the sidewalk, diving toward its own shrinking shadow. It detonated against the concrete steps in a crackling explosion of dust and rocks as the gym students leaped for their lives, shrieking and scrambling over each other.

As those fresh screams rose up, he stared over the streets ahead, to the shopping center across the road, the receding clusters of homes, the green springtime slopes of the valley rising in the distance, the wide curve of the Allegheny River, an industrial artery slouching along the steel mills and gravelworks as it bent toward Pittsburgh. In the busy street beside the school, traffic crawled past the gas stations, fast- food joints, doctor’s offices, and other storefronts that lined the main strip. Up here, it all looked like some toy village in a model train layout. Tiny. Unreal. It seemed harmless to him now. And he felt so much bigger than it.

The hatch shook again, but the mop handle held. Vickler watched it.

He stumbled toward the next saint, dragging his bag behind him.

The bag. That’s what got him here. Thick, full glass jars clattered inside the canvas. The strap cut into his hand, but he wouldn’t let it leave his side again, not that it mattered now. The other kids had discovered what he kept inside, though they wouldn’t understand. They couldn’t. Not even he did, really. A kid had the right to some secrets, if only the ones he could carry. But these had just been taken from him.

He heard voices in the parking lot. More of the gym students were gathered below. His classmates. Former classmates now, he guessed.

One kick. One kick was all it took, and that surprised Vickler. One kick sent St. Francis toppling end-over-end to the ground. But the statue didn’t deliver the satisfying explosion the angel had. Instead of the sidewalk, it landed with its touchdown- raised arms now stuck in a soft flower bed, its head buried: patron saint of ostriches. The kids standing around the garden looked at it with confusion.

Vickler dragged his bag to St. Thomas. He rattled the saint’s head.

Jars clinked madly in Vickler’s bag. Clink. That’s what they called him.

Three kicks later, St. Thomas became an arrow to the earth. He hit the brick wall along the grand front steps and fractured in two at the waist.

This time the kids ran.

St. Barnabas. Decades of hard weather had already crumbled the base of this statue. Vickler heaved him over.

Vickler had black dust on his hands now. The filth smeared his face as he wiped away tears.

A man’s voice bellowed below the roof hatch. Vickler whirled. The contents of his knapsack clattered: clinkclink. The steel sheet rocked once, then twice, as someone rammed it from the other side. The mop handle bent like rubber, flexing, beginning to crack. The next hit splintered it.

The tar-bristled mop end flopped away from the jagged stick.

Vickler’s hands crawled into his book bag and came out with a sealed glass jar. Trapped inside the clear fluid was a small swollen creature: a baby shark, curled in death, its little black eyes staring at him. He inched closer to the hatch, his shadow touching its edge.

A little head, as white as a clover flower, rose up from the hole. Vickler arched his arm and hurled the jar into the face of Mr. Saducci, the school’s mumble-mouthed elderly janitor.

Saducci squealed. One hand rose to shield his face too late. The other squeezed at the edge of the hatch for balance. The jar caromed off his brow and burst against the steel door, spraying the tumbling janitor’s face in formaldehyde.

The old man’s right hand grasped blindly as his eyes sizzled, and the steel lid slammed down, trapping his fingers. The janitor’s wail echoed, seeming to plunge away in the distance as rounds of fresh screams erupted below.

Vickler dropped to the roof and scrambled forward on his hands and knees, pulling his bag after him. He picked up the sharpened end of the splintered mop handle and held it like a spear.

But the hatch didn’t move. The janitor’s trapped fingers didn’t either.

Vickler’s guts roared. His greasy black hair dangled around his eyes. He shifted his pack. Clink. Clink. His eyes darted. “Go ahead!” he yelled, his voice breaking. “Open it up. Pull in your hand. I won’t hurt you!”

A thread of blood began to run along the hatch’s crease.

Vickler waited. He lifted the mop handle and timidly poked at the fingertips.

They rolled off the ledge and bounced against the roof.

this is a series the author is doing and he asked me to participate.

And it is totally spellbinding... Glad you are!

yeah, all i did was post it - very little involvement on my part, but i think it's pretty fun and now i want to know where the next part will be!