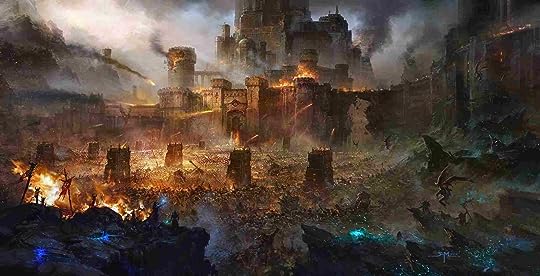 I have mixed feelings about this novel.

I could have done with less of the unpronounceable and unspellable names and places (Edrahasivar, Varenechibel, the Untheileneise, etc.); elaborate rituals, and endless descriptions of dress and costume , as in the following passage:

I think the story hides behind the endless arcane descriptions, impossible names, etc. These things don't really enhance the novel, but detract from it. They're fluff, not substance.

But I can't entirely dismiss the book. It's still moving and involving, because of its main character, Maia (a.k.a. Edrahasivar). At bottom, this is a coming of age story, based on the usual tropes. Abused and reviled child grows up and makes good.

Maia, a grey skinned elf/goblin hybrid, is exiled by his father, the cruel and capricious Emperor Varenechibel, because he (Maia's father) is forced into a political marriage with Maia's mother, Chenelo, a woman Maia's father doesn't love. (view spoiler)[Maia's mother, whom he adores, dies when he is eight. (hide spoiler)]

Maia is raised in exile by his abusive cousin.

But then the entire royal family is killed in an airship accident and Maia's the only relative left alive. So, by default and to everyone's surprise, he becomes the Goblin Emperor, Edrahasivar the Seventh.

Maia/Edrahasivar's character is what drives the story. In contrast to the usual fantasy royalty, he isn't cruel, evil, ruthless, and self-serving. On the contrary, he is kind, compassionate, decent, and ethical.

He also confounds the expectations of others. Although his education has been spotty, he isn't stupid. In fact, he proves to be rather brilliant at statecraft. He builds bridges (literally and figuratively). He brings new ideas and viewpoints to the job of being Emperor.

He's not a pushover. People think he might be weak, because, as Gene Wolfe
says, the world believes that "courtesy is weakness". Maia repeatedly demonstrates his ability to stand up to bullies and those who disrespect him.

The core of the story is Maia's evolution from a lonely, friendless and isolated boy to one who is held in love and affection by the people around him and has many friends. However, Addison does also emphasize the isolating nature of a high office such as Emperor.

His interactions with many people evolve (they have to, as an Emperor is never left alone). These include his future Empress, his bodyguards, various political allies and enemies, petitioners, his grandfather, etc.

There's something adolescent about this story idea. The special snowflake whose worth is finally recognized by the world. Life doesn't always work that way, kiddies.

Still, Maia's basic goodness and compassion are the core of the story. And he's not the least egotistical or vain. These qualities, along with his eye for innovative ideas, are what make him an excellent ruler.

Kyle McCarley's audio reading was usually appropriate, although at times it seemed a bit pompous.
24 likes · Like ∙ flag

Sign into Goodreads to see if any of your friends have read The Goblin Emperor.
Sign In »

I had mixed feelings too. The names are so hard to get through, and unnecessarily difficult for a lot of readers. But at the same time it matched how overwhelmed and confused Maia felt. I felt like my struggle to follow the text made me sympathize even more with his struggle to understand the situation. So I loved it in one way. But at the same time it makes it less accessible to some readers who might have loved the story if it were just easier to absorb.

Great review! mine's a little higher, but I had a lot of the same struggles.

Totally agree on the names and places. Really detracted from my enjoyment.

Hi, Chris..hope you got some good from this in spite of its failings.

Thanks, Mona, I did indeed. I continued thru to the end, despite these shortcomings because I enjoyed the story itself. But I will skip the(as yet unofficial ?) sequel.