3 - "Bring on the holiday cheer, this Scrooge has had a change of heart," Stars.

Christmas and Debbie Macomber, pretty much fit together like and hand and in a glove… perfectly in other words!

Newbie Angel-on-Earth-in-training Harry Mills, has arrived in the US, with the belief that his first mission is a bit of a doozy, getting two people together at Christmas? No problem. Harry it is safe to say is a little on the overconfident side, and neglects to take into account that humans have feelings and emotions, and when it comes to the opposite sex, they aren’t always on the positive side.

Unfortunately his first mission starts to go a little awry, when Addie Folsom and Erich Simmons aren’t initially as amenable at his subtle attempts to get them together as he was hoping. It’s difficult to fall head over heels in love with your older brother’s best friend, when as a child he did nothing but tease and torment you. 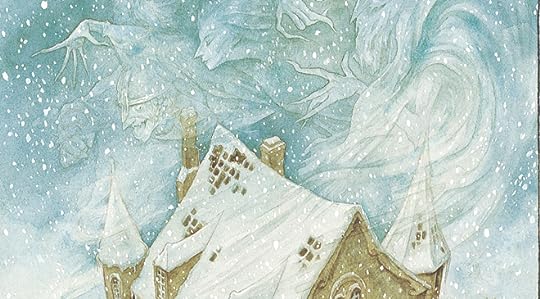 But things are a little different now, Addie’s has returned home after many years away, her father has passed and her mother is up and going on a cruise with her friend (Erich’s mother)for Christmas. Erich however and in a shocking twist of fate, has a freak accident right before they are set to up Anchor, and is in need of almost constant care, so rather than let her mother miss out on her ‘once in a lifetime’ cruise, Addie steps up and offers to care for ‘less-than-impressed’ Erich.

”The only person I ever really want to see is you.”

Addie gradually manages to pull Erich out of his anti-Christmas doldrums, and the diversity of the secondary characters gives the book a little more depth.

Not my favorite Christmas book by this author, but still very much worth a read.

ARC generously provided via Netgalley, in exchange for the above honest review.