it was ok
bookshelves: dnf, rolls-eyes

I love lyrical prose (emphasis on lyrical) and not corny purple prose. When I get the impression that an author tries too hard and, in the process comes off as pretentious, my interest fades away fast. As you can gather from my review this was the case with Star-Crossed. The characters and plot but also the storytelling itself came off as indifferent and unappealing. The story was monotonous and fell flat. Everything simply plodded along without much purpose. I know the purpose of the story was that game to seduce the teacher but still. I just didn't feel it and ended up bored. 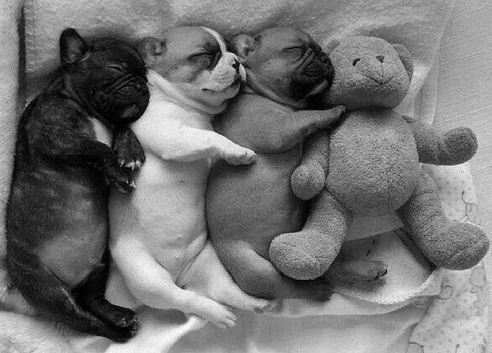 Star-Crossed is nowhere as good as Leah Raeder's Unteachable because first and foremost it lacked the magic. It didn't shine. If anything, it came off as bland and dull. I remember that I didn't fall for the characters in Unteachable but I irrevocably fell for Leah's splendid writing. Unfortunately, this wasn't the case here. I neither liked the characters nor the writing style.

When I finally DNFd the book I've had my fill of analogies and semi-colons. I think the quotes are more telling than a long-winded review.

It wasn't love. (I hope not, Kaitlyn. After all, you only met him a few minutes ago). I didn't love him. But I felt something - and that was enough to make me breathe in the air around us like it was some sweet nectar that if I didn't savor then, I'd never have the chance. He smelled of warm almond; of coffee and sweat, which might have been mixed with the espresso I'd drank or the caramel still lacing my breath. Cherry sugar still coated my tongue, and I wanted him to taste it.

Shame came flooding like a syringe shot straight into the vein, mixed with an undeniable thrill.

She had about the same subtlety of a cow chewing grass, but oddly enough, there was something sultry about the way her mouth moved.

My father was surrounded by his business partners, all in suits, their faces already flushed from the alcohol that slogged through their veins like motor oil.

The candle flame was still dancing, rising and falling as the white wax dripped down like sweat from joined bodies.

At first, his hands shot up, like a criminal marked with a red hot target; like he was facing certain death by firing squad. They fell slow as quick-sand, eventually finding my hips where they settled with a shaky hesitancy, hovering just above the fabric.

Mr. Tennant kissed my mouth like it was something to worship, something to savor. Delicate and delicious, his breath shallow as a pool of puddle water. And if I were still a child, still stuck in the age of sticky-sweet candy and hop-scotch, I would have jumped and played in that murky depth forever.

When it was just the two of us, door securely latched, my heart started humming; it trashed around like a caged animal. Standing there, no words spoken, we were like two stranded voiceless islands. 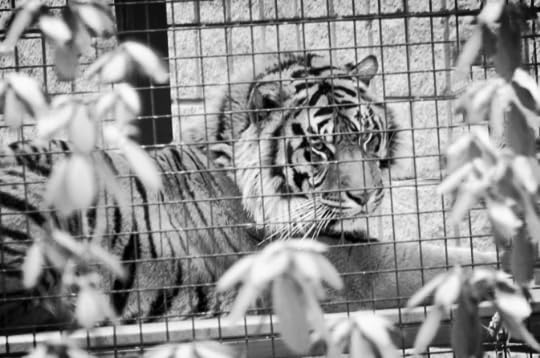 I could listen to him talk for hours about anything and everything. Literature, film; his past that was still about as clear as an aged, opaque window.

Mr. Tennant remained standing, and I watched his throat move as if something lived inside there. 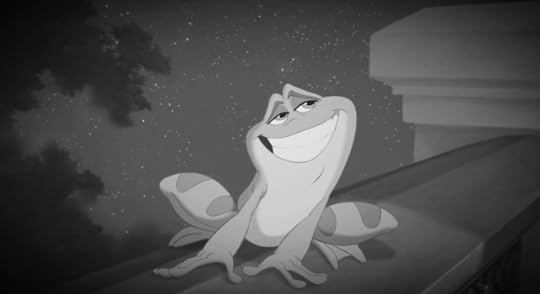 Will appeared unconvinced; skimming his hands through hair that only proceeded to fall straight over his forehead; black strands over fair and flawless skin. His natural allure was a tragedy itself.

"Jesus," he exclaimed; soft and feral in the way the words crawled into my ears, sinking like toxic paint into the crevices of my brain.

One by one, I started unbuttoning my shirt; watching as his eyes, like an elevator, slowly drop from my chin to that calico fabric. 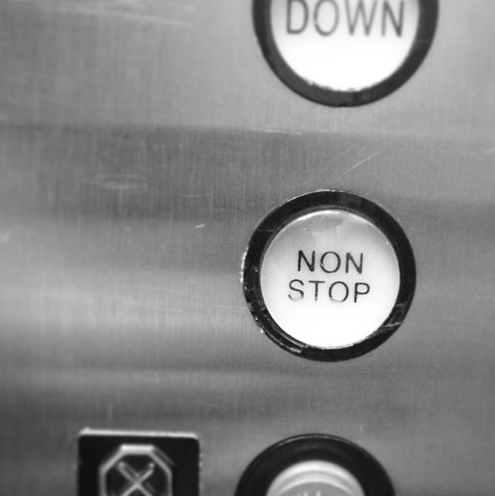 There was an undeniable spark in his eyes, flint on stone. The idea seeped into his face as if I were suggesting he dive into the first sheet of freshly-fallen snow.

He listened without protest; his eyes quickly lapping up every movement like the constant shutter-sound of a camera; each millisecond like a frame of film that would forever burn into his mind. 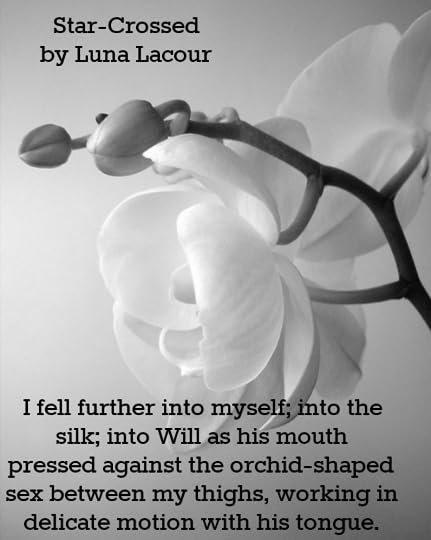 While XXXXXX kiss felt like the impending explosion of a firework, Mr. Tennant's mouth against mine was like oxygen drizzling from a cannula; enabling a deeper breath; giving me the sneaking suspicion that there was a deeper strength concealed somewhere amidst entrails and bone.


I'm very sorry but this book wasn't my cup of tea. At all.

All quotes are taken from the pre-published copy and may be altered or omitted in the final copy.

I'm curious about this one. Looks interesting, but it could easily be one of cliche stories.

Glass wrote: "I'm curious about this one. Looks interesting, but it could easily be one of cliche stories."

The blurb really sounds promising, Baba! I hope the whole books lives up to it. :)

♥~♥Geri♥~♥HatesLoveTriangles ♥~♥ wrote: "The blurb really sounds promising, Baba! I hope the whole books lives up to it. :)"

Yep, the blurb did sound very good. But like I told you I've got some issues. Will keep you posted. :)

Thanks, Shannon. I loved Leah Raeder's Unteachable. However, I have an inkling Star-Crossed won't be up to par. We'll see. :)

Well bummer!! I hate when a book doesn't live up to what ya wanted. Wonderful honest review Baba!! xoxo

I'm sure your next book will be much better :D muah <33

Oh shoot! I was hoping this was gonna be a goodie! Great, honest review Baba!!!

My first thought reading your quotes was, "What's a cannula?" LOL!

I love that frog photo, hysterical! Thank you for the review, you just reminded me I should be re-reading Unteachable!

Shannon wrote: "Well bummer!! I hate when a book doesn't live up to what ya wanted. Wonderful honest review Baba!! xoxo"

Thank you, Shannon. Yep, I share your feelings. :/ xoxox

Christine The Dark Romance Junkie wrote: "Oh shoot! I was hoping this was gonna be a goodie! Great, honest review Baba!!!"

Thank you, Christine. Hope you'll enjoy it more than I did! Good luck! :P

♥~♥Geri♥~♥HatesLoveTriangles ♥~♥ wrote: "My first thought reading your quotes was, "What's a cannula?" LOL!"

LOL I know what it is, Geri. Honestly, all those analogies…um…no comment. :P

Oana wrote: "I love that frog photo, hysterical! Thank you for the review, you just reminded me I should be re-reading Unteachable!"

LOL I know what it is, Geri. Honestly, all those analogies…um…no comment. :P"

I had to Google it and it wasn't a sexy image at all! LOL!

So sorry this wasn't your cup of tea Baba :)

Better luck on your next book, Baba

Great honest review Baba. Shit, I wanted to do it next, will have to revise then.

Ehhh I didn't notice any of those quotes when I read it but now that you mention...those do sound odd. I wasn't wowed either :(

Hope your next one is better Baba! <3

Oh wow, I could only read a few of those quotes. I have no idea how you got to 50%, Baba! Sorry this didn't work. Love the puppy picture, though! Great honest review! :)

Isabel wrote: "So sorry this wasn't your cup of tea Baba :)"

Chandra wrote: "Better luck on your next book, Baba"

It didn't deliver either. Thank you, Chandra. :)

Mysza wrote: "Great honest review Baba. Shit, I wanted to do it next, will have to revise then."

Thanks, Mysza. More than a few readers loved it. Just give it a try and maybe you'll love it.
Good luck! :)

Lady Vigilante (Feifei) wrote: "Ehhh I didn't notice any of those quotes when I read it but now that you mention...those do sound odd. I wasn't wowed either :(

Hope your next one is better Baba! <3"

Lol Thanks, Feifei. I'm reacting very sensitive to this kind of writing; just not my cup of tea. Sorry to hear that you didn't love it either. :((

Baba, as always your reviews are accurate and honest! I have started this book and am feeling the same about some of the issues you mentioned. Another thing I noticed toward the beginning of the book is in one scene Marius wasn't wearing a tie, and by the next page he was described as dragging his tie against Kaitlyn's back when he was standing close to her. *sigh* those kinds of things frustrate me in a book..I don't know if I should bother continuing or not..I hate not finishing but I also don't want to force it either???

Jen wrote: "Baba, as always your reviews are accurate and honest! I have started this book and am feeling the same about some of the issues you mentioned. Another thing I noticed toward the beginning of the bo..."

I'm sorry to hear that, Jen! You are a very attentive reader (that makes you also a great beta reader, BTW). :)))
Whatever works best for you…you could also put it down for a couple days and pick it up later… xoxox

Better luck with your next. Well said, Baba! xx

BAHAHAHAH!!!! XD Oh.my.gosh! I can't even express how hard I'm laughing (I feel like I should add an analogy somewhere here! lol ;p). I'm so sorry this didn't work out for you, Baba, for obvious reasons. And I totally get your point about authors trying to hard, especially since it reflects in their work. I'm just wondering how you even got to the 50% mark?? Hopefully, your next read is mind-blowing! *fingers and toes crossed* Fabulous, honest review, Baba! :)

Dang! Sorry this one didn't work for you, Baba! ((hugs)) and kisses

Thank you, Maida. I think I can hear it and I'm sitting in front of my laptop. Please…no analogy any more. I'm kinda cured. :)))
My stamina left me when I was halfway through...

Kristen (Peddler of Smut) wrote: "Dang! Sorry this one didn't work for you, Baba! ((hugs)) and kisses"

Another left down for you. Sorry, hon. Great review xx

Patrycja wrote: "Another left down for you. Sorry, hon. Great review xx"