Jessica's Reviews > A Game of Thrones

I am no stranger to Game of Thrones, at least not to the television series, however this is the first time I've attempted reading the series and I have to say I'm not disappointed.

I've heard many a time that this series is pretty darn good, which, so far, it is proving to be, but it isn't without its faults.

Firstly, this is a book where the chapter swaps POV every chapter, it's a rarer form of writing a novel and quickly different to read compared to the usual first person. I found it was more difficult to keep up with what was going on (in detail) because of all the moving about in places and characters, not only that, but keeping us checked in with all the characters takes out the surprise. Don't get me wrong, twists can still be added, but you can't have that same level of mystery any more, which is a shame but not too much of an issue.

Secondly, what's up with every male character being bad? Or failing that has whiskers, or both. This isn't a good or bad thing, just something I picked up on, it's not something I liked all too much though but I think that's because of how I think of the characters with the actors' looks.

One thing that differs from the TV is AGE, especially when concerning the children. For example, Robb Stark: 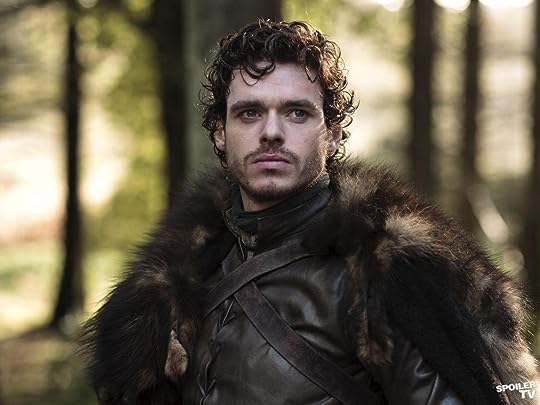 Does he look 15 to you? Not really, and all the characters are similarly a few years younger. But that's not what bothers me, what bothers me is what the characters do. I know this is a book which would be classed under some sort of historic fantasy, and in the past the age of adulthood was a lot younger than it is now, but as someone who is apparently the age of Robb Stark myself I still find it takes a while to get over and I can't think of it as realistic.

One scene I just have to bring to attention is Bran's coma scene. Wow, the writing there was just amazing. The descriptive writing throughout the book is just as good as is expected of George R. Martin but I just love the beauty of this scene, the symbology, the possible supernatural/paranormal elements to this whch are creeping in with dragons, white walkers, after all this is historic fantasy, we need our high fantasy moments. 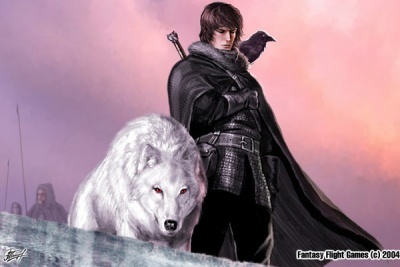 [I'm sorry, I saw this picture, I couldn't resist.]

Poor Jon, just poor Jon, at least in the beginning. It just feels as if he's been so isolated and now he's just realised he's permanently signed himself up for something which isn't as good as it seems. Tough luck boy, at least Catelyn won't be there. Which brings me to another point - I don't like Catelyn. like, at all, I just don't like her as she's written in the books (nothing against the writing, just don't like the character herself). But at least she isn't as weak willed as the young Sansa (who we know improves with age).

Overall I would certainly recommend this book to many people, but know it's not everyone's cup of tea, this is a very descriptive book and throughout the series there is going to be a lot of violence and mature scenes. Some people like that, I don't mind it, but others aren't into reading that. It's certainly a long book to read but then again it only took me about a week to read, onto the second book!
1 like · Like ∙ flag

Sign into Goodreads to see if any of your friends have read A Game of Thrones.
Sign In »