Kelly (and the Book Boar)'s Reviews > The Rosie Project

Find all of my reviews at: http://52bookminimum.blogspot.com/

Don is a creature of habit. His work, exercise, dinner, clothes, well …. EVERYTHING is scheduled to the second with zero variation. The only time Don has really ventured out of his comfort zone was when he befriended Daphne – a lonely elderly neighbor whose husband had been put in a nursing home. Before Daphne’s own health declines, she proclaims what a wonderful husband Don will be to some lucky girl. It’s at that point Don realizes he should probably get serious about finding himself a wife – and of course he should do it in the most scientific method imaginable. After all, why let emotions cloud his judgment when science already has all the answers? Enter “The Wife Project” – a survey that will find a perfect mate. There’s only one problem - Rosie, an applicant to the project sent in by Don’s friend Gene, didn’t answer the questions correctly, but Don still enjoys her company. After realizing there is no hope in a romantic future together, Don decides to help conduct “The Father Project” and find Rosie’s biological father. Eventually both projects fizzle out, but Don still can’t get Rosie out of his head. Embracing a new view of life, including a dayplanner containing only the most basic appointments, a new wardrobe and dating advice straight from “Hitch”, the only question that remains is - will the “Don Project” be a success or a failure?

I’ve noticed for each handful of positive reviews, someone out there is posting a scathing counterpart. These reviews say the author has made light of a medical condition or the author has completely gotten his facts wrong or the author should have written a serious book rather than a comedy if he was going to broach this subject matter or the author is simply a huge ass or blah blah blah blah blah. I’m all for free speech, but I question why someone seeks out a book that they know will make them miserable? We all fall victim to the “whoops, thought this was going to be great and I ended up hating it instead” novel, but to actively seek something out just so you can flame it? Wellllllll, there’s a crazy person in that scenario, but it sure as heck isn’t Don from The Rosie Project.

Okay, now that I got that out of my system, let’s proceed. I definitely didn’t have an agenda to worry about when I picked this up (since I’m offended by nearly nothing, I’m guessing that probably will never be a problem). In fact, I knew ZILCH about this book except that my friends here at Goodreads were reading it in droves and they would not dare steer me wrong. My assumption was correct. This book is stinking adorable! It made me so incredibly smiley when I had been having a bit of an “off” week. I loved the fresh perspective on the age old boy meets girl story. I can’t remember the last time I laughed out loud (at my desk – during the lunch hour – like an insane person) at a book. If you want to read something that will change the world (or at least your life), The Rosie Project is more than likely the wrong choice. On the other hand, if you just want to get lost for a few hours in a book that makes you feel better after you’re finished than you did before, I highly recommend checking it out.

Oh, and don’t worry about Don:

Sign into Goodreads to see if any of your friends have read The Rosie Project.
Sign In » 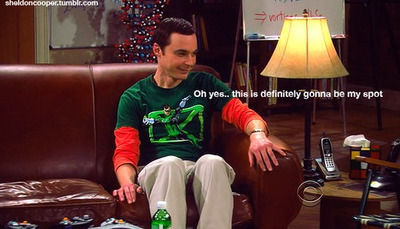 I'd never even heard of this book until now, so thanks!

You're welcome. It was on the newnewnewnewohsobrandnew release rack at the library. I hadn't even read a synopsis, but I recognized the cover from readers here and picked it up. So glad I did - it was just too cute.

Made me think of Sheldon Cooper also,Kelly.

LoL, I loved it when you said, "but to actively seek something out just so you can flame it? Wellllllll, there’s a crazy person in that scenario,. Wonderful review Kelly ;o)

I so enjoyed this book. Loved when you said "a book that makes you feel better after you're finished than you did before." So true. What a perfect review!