Read 2 times. Last read October 6, 2013 to October 8, 2013.
Bridget Jones lives the typical life of a singleton. She drinks too much, eats too much, smokes too much, worries about dying alone, worries about not having a boyfriend, has smug married friends who are no help at all in the self esteem department, and parents that are forever causing issues. If she could just get her act together and find a nice sensible boyfriend. Though that hardly looks to be the case for this year as she has just started seeing her boss, Daniel Cleaver, who is the exact person she meant to stop fantasizing about this year... then there's Mark Darcy, the man her parents wish she would start dating. A man she finds quite odd and off putting, at least at first. With emotional ups and downs like her yo-yoing weight, Bridget has her year cut out for her.

Back in 2001 things for me were rough. They were going to get far worse that summer, but at the time I didn't know that. I really needed an escape and Colin Firth was about to show me the way. The movie Bridget Jones's Diary might not have ever registered on my radar if not for Mr. Darcy. Knowing that it was based on a book, and you all being familiar with my tendencies, I just had to read it and picked up the tie-in. The book sat languishing for a little while. I was in the middle of a theatre production of Endgame that was about to end very dramatically with the Beckett estate shutting it down and confiscating the playbills, photographs, scripts... you see, Beckett has some very sticky rules that you have to abide by his vision, so no cross gender casting, no "interpretations," it's as he wrote it or you'll find yourself never getting to see your name in a playbill as "properties master" for the first time. The weekend that was to be our big opening instead became a bit of a wake and I needed something, anything, to distract me. I picked up Bridget Jones's Diary.

I powered through the first book, ran to Borders, powered through the second book and then took to the internet to learn more about this new genre I had just stumbled on, Chick Lit. It was kind of an avalanche after that, with me ordering Helen Fielding's other books, looking at the Amazon recommendations, finding other authors, you get the picture. Helen Fielding, besides being deemed the progenitor of this literary subgenre by others, was quite literally the starting point for me as well. If you don't view Helen Fielding as the doyenne of Chick Lit, we might just as well stop talking right now. With the newest installment of Bridget's adventures about to hit shelves this past fall I knew that it was time to reacquaint myself with Miss Jones. What's interesting is that, well, I didn't love it as much as I did. Perhaps it's just that others have taken off from where she started and done bigger and better since, so therefore this was a bit flat. Also, is it just me or is Daniel Cleaver a real dick? I wonder if somehow over time Hugh Grant and his ability to be a letch with also still being cute has worked it's way so far into my mind that I forgot the truth of the book. Daniel Cleaver is a dick.

I think in fact that the movie is the more successful of the two incarnations of this story, which is the exact opposite for the second. The movie hammered out issues and some of the unrealistic situations. That is what strikes me most as annoying in the book, things that are unrealistic, but not funnily so. Bridget's mum and her men. Bridget and her unrealistic weight issues. Now here I want to be clear, it's not the struggle with her weight I object to, nor her horrific eating habits, but the fact that using a BMI index, Bridget would have to be shorter then 5'4" (which is oddly how tall Renee Zellweger is) to be fat for the weight listed... do I think she's that short? No. I think that Helen Fielding needed to do her research here a little better. That or she totally has some sort of eating disorder herself and has bizarre expectations, which I think is best summed up when Tom asks Bridget that doesn't she need 2,000 calories a day to live?

Also, the deus ex machina of Bridget and Mark. They barely have contact or talk in the book and at the end he swoops in, fixes everything and they whisk off to a hotel and declare their love for each other. Excuse me? I know this whisking of to a hotel and happily ever after is kind of a trope of the genre, it even happens in the first Shopaholic book by Sophie Kinsella... but there needs to be some development to get to that point. Sure we KNOW they are destined to be together, that doesn't mean that you just put them together at the end because it's the end... sigh. I think I'm going to go watch the movie again instead of thinking about this anymore.

Actually, one more thing... the graphic designer in me CAN NOT be silenced. I bought this lovely Penguin edition, because, I mean, seriously, this is a lovely cover, even if Bridget is a little too svelte in my mind. But there's a big problem with how the front flap's illustration looks when you're reading. A picture is worth a thousand words... so here's a picture...

Here's the cute illustration, love the banner of "No Emotional Fuckwittage." 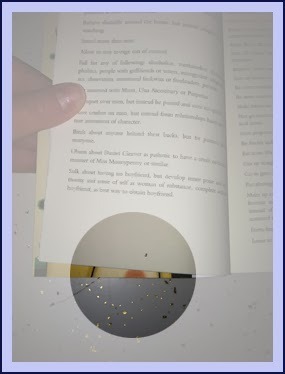 Now here's what you see when you're reading... yes, it does look like a boob is starring at you. It's very off putting. Now I have nothing wrong with boobs, I have two of them. But do I want one starring at me while I'm trying to read? No thank you. Also, now my mom won't stop laughing after I showed her this as the definition of bad illustration placement...
Like ∙ flag

Sign into Goodreads to see if any of your friends have read Bridget Jones's Diary.
Sign In »

Have you read The Diary of a Provincial Lady? They're proto-Bridget Jones from the 1930s. I am certain that Helen Fielding must've read them because they're so similar in tone - and also absolutely hilarious.

Flick, it is actually on my to buy list! I've heard many a great thing about E.M. Delafield but hearing this makes me want to read it all the more!