Argona's Reviews > A Game of Thrones 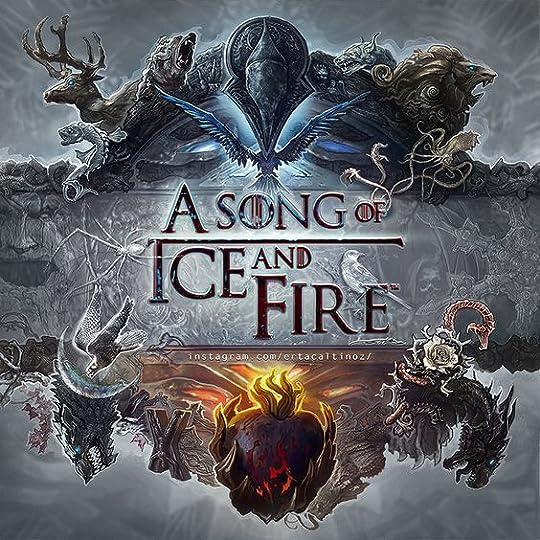 It’s really hard to describe an epic, carefully planned, well-crafted, well-written, engrossing, gripping, rewarding and possibly life changing fantasy series written by a real genius in one single review. But I am going to try, since this is one of my all time favorite series and I feel obligated to write at least one love letter to each of my favorite series, so here it goes.

As a child, I used to read very heavy books. I read most of my classic literature s when I was very young. Unfortunately, my taste in books changed as I grew up and I found myself stressed by everyday life issues, surrounded by politics that affect my daily life and hardly change or get better. I lost my patience for reading heavy books that can easily function as murder weapons. I lost my patience for reading about grief, sorrow and tragedy. Books are my joy, my escape! Long story short, I became fond of light readings with happy endings. My friends know that I avoid character death like it’s a plague or something. If I really have to read a certain book that contains character death, my friends first inform me about who dies and prepare me in general. This way, I can go in without becoming overly attached to doomed characters.

Now this book is more than 800 pages. The later books are more than 1000 pages. This series contains character death. Characters drop dead left and right. Even the heroes are not safe.

And… I am reading this series! I have fallen in love with this series! I have actually become attached to these poor doomed characters when I specifically told myself not to! Have I gone crazy? Probably. Most likely. Definitely. And I am enjoying every minute of this new insanity.

It didn’t happen instantly. I tried reading the first chapter and I got bored. I couldn’t distinguish the main character from the rest. None of the characters meant anything to me at the beginning and there were so many of them, it was overwhelming! So many names! So many details! I tried to skip over some of the lines but it wasn’t working. In the middle of this confusion, the POV actually had the audacity to jump from one character to multiple others, even characters that were geographically at different parts of this amazingly complex world. I gave up.

It took me half a year to get back into the book. Watching seasons 1-3 of the TV show helped a lot. I came to know the characters a bit and slowly, this unique and unpredictable universe grew on me. And I thought maybe now that I know who is who, I can find the patience to read something this huge. I went back in and finished the first book. I liked it enough and was curious enough to start the second one after some time had passed. Pay attention, I wasn’t crazy about this series yet! Again it took me a while to finish the second book but when I did finish it, something had changed. Something life changing. I had become immersed in the world of Ice and fire. I picked up the third book at the exact day I finished the second one and started to devour each and every word. I was in a hurry to finish the book and yet I wanted to savor every moment. I wanted to read all the other books that were innocently winking at me and yet I couldn’t bring myself to risk a fall out from this multi-layered universe. I was simply freaking high on this series!

And now I am writing this review after finishing the 5th book. I am officially addicted. Now I find the books so superior to the show that I can hardly watch the latest season (Season 5) without flying into a rage! I have been rereading certain chapters in the entire series, to better understand all the analyses and essays that exist online. I am reading the graphic novels and the companion book that is actually a fully illustrated “history compendium" of Martin's fictional universe! Crazy? Hell yeah! And I am loving it!

This series actually put me back in the mood to read heavy complex books. What if they are as good as ASOIAF series and I am missing out on them?? So people…don’t give up! Get over the tedious parts at the beginning. Drag yourselves over all these places and names that hold no meaning at first. If you are into fantasy, you HAVE to give this series a try. What if you are missing out on something amazing? Think about it and put some real effort into reading this.

Sign into Goodreads to see if any of your friends have read A Game of Thrones.
Sign In »

“Never forget what you are, for surely the world will not. Make it your strength. Then it can never be your weakness. Armour yourself in it, and it will never be used to hurt you.”
― George R.R. Martin, A Game of Thrones
tags: identity
12389 likes

“Once you’ve accepted your flaws, no one can use them against you.”
― George R.R. Martin, A Game of Thrones
tags: game-of-thrones, george-r-r-martin, song-of-ice-and-fire, tyrion-lannister
1819 likes

“Bran thought about it. 'Can a man still be brave if he's afraid?'
'That is the only time a man can be brave,' his father told him.”
― George R.R. Martin, A Game of Thrones
tags: bravery, courage, fear
6722 likes

“The man who passes the sentence should swing the sword. If you would take a man's life, you owe it to him to look into his eyes and hear his final words. And if you cannot bear to do that, then perhaps the man does not deserve to die.”
― George R.R. Martin, A Game of Thrones
tags: honor, justice, personal-responsibility, responsibility
2664 likes

“Most men would rather deny a hard truth than face it.”
― George R.R. Martin, A Game of Thrones
tags: denial, honesty, truth
2538 likes

“The things we love destroy us every time, lad. Remember that.”
― George R.R. Martin, A Game of Thrones
tags: love, mormont
2466 likes

“When the snows fall and the white winds blow, the lone wolf dies but the pack survives.”
― George R.R. Martin, A Game of Thrones
tags: friendship, loneliness
2617 likes

Argona, you do love this series. :) if there is one person in the world who is able to motivate me to read these books - it's you :)

Sylwia wrote: "Argona, you do love this series. :) if there is one person in the world who is able to motivate me to read these books - it's you :)"

Wow, amazing review, Little Argona. I can feel how good this series is for you. It's inspiring :D .

This picture at the beginning is stunning!

It makes me smile, I find it sweet somehow. Beautiful and inspiring review Argona :)

Sheziss wrote: "Wow, amazing review, Little Argona. I can feel how good this series is for you. It's inspiring :D ."

Thanks a lot, hun! I really do love this series!^^

Trish wrote: "This picture at the beginning is stunning!"

Indeed! It's one of my favorites since it perfectly depicts the epicness of this series.

Carmen wrote: "It makes me smile, I find it sweet somehow. Beautiful and inspiring review Argona :)"

Omg, I am so happy to hear you like my review this much! Thank you so much for your lovely words, Carmen!*Hugs*

Thank you so much, Ana! Yeah, I totally agree with you. I am so freaking afraid of the ending!>_>

Thank you so much, Exina!*Hugs*

What a great review. Very inspiring. I really really enjoyed reading it.

Thank you so much, Cora! I am really glad to hear you actually enjoyed reading my review!*Hugs*

Is there's links of online pdf graphic novel of Got

Eslam wrote: "Is there's links of online pdf graphic novel of Got"

Sorry, I don't know about any such links.