Mortal fear is as crucial a thing to our lives as love. it cuts to the core of our being and shows us what we are. Will you step back and cover your eyes? Or will you have the strength to walk to the precipice and look out? Do you want to know what is there or live in the dark delusion that this commercial world insists we remain sealed inside like blind caterpillars in an eternal cocoon? Will you curl up with your eyes closed and die? Or can you fight your way out of it and fly?

I swear if I could give this novel 6 stars, I would.

There is this girl who lives inside of me, and she's a little weird. Actually she's a lot weird. She was really a presence when I was in art school, and in the years since graduating, she's been kind of living in the shadows, still there, but kind of suppressed by my all new "adult" persona. Just to give you a little insight into my little weirdo, here are a few things about her:

She thinks guys who sing in Eurometal bands who wear fishnets and eye makeup are sexy. 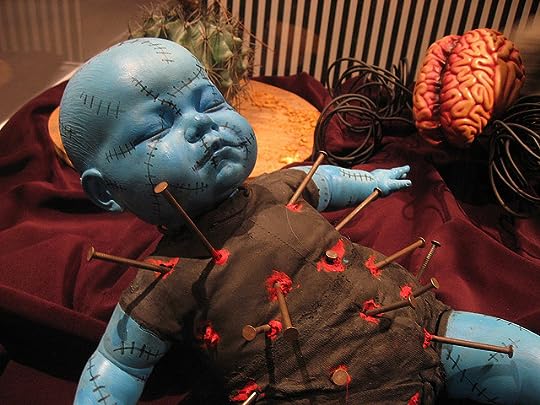 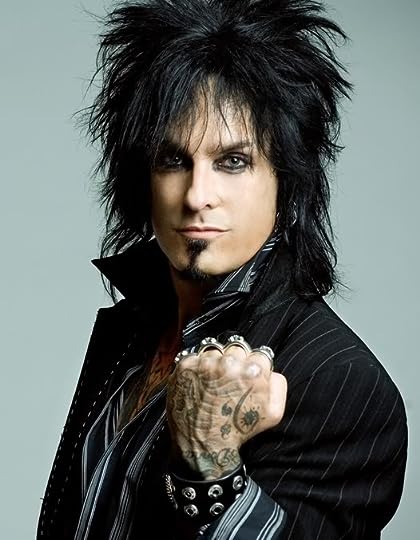 She wants to marry Nikki Sixx.

And lastly, she LOVED Night Film.

And the rest of me did too.

Night Film not only made my inner weirdo come out with her freak flag at full mast, but it challenged me in every possible way. THIS BOOK IS THE REASON I READ! This book is perfect, and exquisite, and dark, and twisty, and shows us sides of the human soul that we don't want to see but can't ignore once we know they're there. This book grabbed me from the first freaking epigraph which starts out this review. The quote is from Stanislas Cordova who is a character in this book. Herein lies the beauty. Marisha Pessl has taken a city and a world that so many of us know, and re-written its history to include this crazy film director and his family. And you know what? IT WORKS. She has injected him into news media, pop culture, even history. I found myself actually believing he was real and that I had read about his daughter's suicide in the news only yesterday myself. This is what good writing does. It makes you abandon everything you know to be true to chase after this new reality that has been written into existence in 602 pages.

This book is also a goldmine of spoilers, and the less you know before reading, the more magical this world becomes so I don't want to get too plot-centric in this review. Stanlislas Cordova is a film director known for his dark and twisted night films, thought to blend the lines between fiction and reality. His fans have almost created a cult of worship to this man (in this way, it reminded me a tad of Kevin Bacon's TV Show, The Following which shares the same dark but beautiful undertones) and mystery and tragedy seem to follow him and his family. The novel opens with the tragic suicide of his beautiful 24 year old daughter, and a disgraced investigative journalist with the help of two "research assistants" (who know more than they are telling,) try to find the truth about her last days, and in doing so, try to peer into the Cordova underworld. What ensues is a literary masterpiece in every sense.

I am one of those who never read Pessl's first book, Special Topics in Calamity Physics, so I dove into this one without any preconceived notions. The writing was truly fantastic. She set up the tone in the 4 page prologue, and never let up until the last haunting word dripped off the page. This is sumptuous writing; writing which makes you cling on to every word and which makes you think long after you turn that last page. Every word drips with meaning, and I can see why it took Pessl 7 years to write this after her first book was published. This is a book where every single meaning, every character, every word spoken, every little gem that is hidden comes together to form this web of suspense and intrigue. You see the web close up as you are reading, and then once the words have ceased, you see the web from a distance and its beauty and meaning overwhelm you and take you into a whole new world. The story unfolded so perfectly, and I waited hungrily for the next piece of the puzzle to reveal itself. In this way, it kind of reminded me of Girl With the Dragon Tattoo just in terms of layers upon layers of story, hidden away under more layers of family secrets, and mysticism. Piecing the puzzle together was simply delightful. I cannot wait to read this one over and over and over throughout my life.

I wish this book had been published 7 years ago when I was a senior in art school because I think I would have read it twice in one sitting at that time. It would have been the thing I skipped class, and meals, and drinks with friends for. It was like it was written just for me. A phrase would pop out at me that would ring with such truth, that I was overwhelmed. At times I had to put the book down for a few minutes, just so I could digest the brilliance of it. I am a bit worried that every book I read from here on out will just pale in comparison, and things I might have liked a week ago will just seem less colorful, less savory, now that I have Cordova on my brain.

Cordova. Even his name reeks of brilliance. And I am so totally upset that he and his movies aren't actually real. Because if they were, I would definitely have been one of the Cordovites (his followers). There is something very David Lynchian about his character, maybe with a touch of Burton, a sprinkling of Polanksi, and then topped with some Kubrick. This book also appealed to the film lover in me, and blended my passion for both the written word, and the art of film into one big nirvana-esque moment. The only thing I didn't like about this one was that it felt so real, that my trip back to reality was a tough one to take. I wanted to search on Craiglist and find a bootleg of At Night All Birds Are Black or find an underground screening of Thumbscrew Above all, I wanted to find the hidden online Cordovite's lair, The Blackboards, so that I could continue my own quest for the truth about the mystery man.

People are saying that this book is reminiscent of Stephen King, Gillian Flynn, and Stieg Larsson. I get the similarities to Larsson in terms of style, but I think that Marisha Pessl deserves to stand completely on her own for this one. This book ousts every other book I've read in my life. I dare anyone else to write something that will top it, but I doubt anyone can.
28 likes · Like ∙ flag

I fell in love with the cover...and then it went from there.

I'll have to try and remember to seek out a paper copy, since I've heard there are easter eggs all throughout, that link to bonus content when you snap a picture.

Dan 2.0 wrote: "I'll have to try and remember to seek out a paper copy, since I've heard there are easter eggs all throughout, that link to bonus content when you snap a picture."

I only read the ARC- someday I will have to read the real thing- with all the bells and whistles.

This is in my top five books I've read. Great review.

ok, I MUST bump this one up.

Kristin ❋extols death with luminescent brilliance❋ wrote: "ok, I MUST bump this one up."

You should. It's actually a really fast read for the length.

Guys, seriously. I am kind of drunk right now, but PLEASE read this. It is amazing! Just amazing.

Thank you Ed and Delee and Libby!

Dan....read it in traditional form. Not e-book. You will get so much more out of it. I will even re-read this for a maddive buddy read. Just everyone READ THIS BOOK. NOW!

I loved this book so much.

I hope the author writes another book like it!!!!

I'd be willing to buddy read it with you too. :D

Nenia, your new name rocks. And I will buddy read this with you anytimr

Thanks for the compliment! It was the only one that wasn't taken so I thought WHY NOT. IF IT FITS, I SITS.

And hooray! WE should definitely do that!

When I am not compleyely filled with scotch, we shall set a date.

I am entirely sold!!! (My freak flag is things like that fact that I still consider Doctor Frank-n-furter one of the sexiest characters of all time, any guy putting on eyeliner goes up a level of hotness instantly. )

We are going to do a massive buddy read of this one but probably not until winter. Karly, seriously. AMAZEBALLS. I don't say that about many books.

I have plenty of books to read, so I can wait out the buddy-read m'dear!

thank you for your excellent review of this book - made me get it sooner than planned and I thoroughly enjoyed it.

Oh geez, I forgot we planned to BR this in Dec/Jan...

Bud wrote: "thank you for your excellent review of this book - made me get it sooner than planned and I thoroughly enjoyed it."

You're welcome, Bud. I am so happy you liked it.

Kristin ❋extols death with luminescent brilliance❋ wrote: "Oh geez, I forgot we planned to BR this in Dec/Jan..."

Yeah but I lent my copy to my friend and haven't gotten in back yet. Why don't we do it later in the winter? Maybe end of February/beginning of March? Is that do-able?

That's fine, there's no way I could do it now. So behind on everything.

I am too. We can play this by ear.