After reading the blurb I was prepared for Sadie Matthews' Fire After Dark Trilogy meets Vina Jackon's Eighty Days Series. And after reading a few pages I still felt that way. And I mean that in a positive way - I loved those books. But just like with the Eighty Days Series, I'm afraid they are going to put this little round sticker on the cover of The Silver Chain Books saying: For Fans Of Fifty Shades & Crossfire.

And that's just wrong! As Admin of a FSOG FanPage on Facebook I know that 95% of all Shadies do NOT like the Eighty Days books. A lot more liked the Fire After Dark Series, but still not the majority. But those books are just a touch too hard and there's not enough 'Hearts and flowers' for FSOG-Fans. So, if I could suggest a sticker for The Silver Chain books: For Fans of Fire After Dark & Eighty Days!

Twenty-year-old Serena Folkes has a life to start living. That's why we start the book with her on a train from her little sea-side town in Devon to London. After her adoptive parents passed away and left her some money she packs up her cameras and pictures to move to the big city, where she plans on handing out her CV to art galleries. She will stay at her cousin Polly's flat. (Polly left to go to work in New York with her new boyfriend Pierre).

On the night of Halloween she's taking pictures of little kids in a little gated park - that's when we meet Gustav Levi. A dark and handsome stranger with a vampirical vibe. 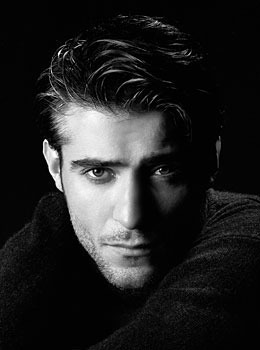 They're instantly attracted to each other, even though he's almost twice her age. After some intense moments in the cold and dark park they're having a drink at a hotel bar and when she gets called away to a party, she forgets her cameras at the bar. That's how she finds herself in the Levi Building the next morning where she finds out that Gustav owns the whole building, including the gallery on one of the upper floors.

Because he was curious, he checked out the pictures on her camera, and he's very interested in her work. In exchange for an exhibition of her photographs she will have to sign a contract that says she will be his until all her pictures are sold. He later gives her a silver chain - bracelet, with her name engraved on it, to bind her to him......

- she has an ex-boyfriend - Jake
- he has an ex-wife - Margot
- he has a chauffeur, pilot, cook, bodyguard - Dickson
- he has an assistant - Crystal
- her past plays a big part in the book - the 'people' who raised her were horrible, unloving idiots.
- his past, of course, plays an important part too - his wife hurt him really bad.
- her silver 'bracelet' obviously plays a huge part - plus the chain he attaches to it - to keep her close ☺
- no idea for what it's supposed to stand, but his red scarf has lots of appearances in the book ☺
- his brother - the only family he had - is not in the picture anymore - there's a story there ;)
- we're flying to Switzerland - to stay at his chalet for a bit
- there's LOTS of sublte sex - and alone-sex - not much 'real' sex ☻
- there's spanking!
- voyerism plays a big part in the book - Peeping Tomasina!
- there will be Nuns ☺
- there will be a CLIFFHANGER ending!!!! I. DID. NOT. EXPECT. THAT.

There is this huge connection between Serena and Gustav, but it takes them forever to finally get it right. It was a bit too slow for me. It felt like the two of them didn't have that much time together in the book. Serena was alone too much, talking to us too often. I CAN'T WAIT for book 2 - the cliffhanger really left me hanging! I want to know what happens with Serena and Gustav and why and what and everything ☺

Sign into Goodreads to see if any of your friends have read The Silver Chain.
Sign In »