Read 4 times. Last read April 1, 2020 to April 8, 2020.
1 highlight
The first time I heard of this book was in high school, specifically my sophomore year in World History. We had just finished taking notes over the French Revolution. Then... my teacher pulled down the projector screen and we all knew what this meant: Movie. And, we watched this movie. Well, a made to TV movie that featured Prince Humperdinck as Sydney Carton and Charles Darnay.

Then, I listened to the book one summer at work. Absolutely loved it, just as much as the movie entranced me in class. I'll always picture Helena Bonham Carter as Madame Defarge. And, then, Sacha Baron Cohen as Defarge. I mean, look at them: 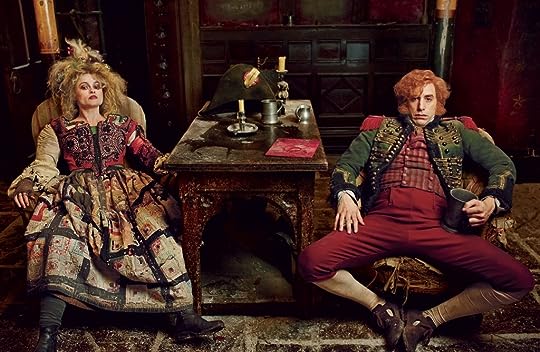 However, all I can think after reading this is:

For the record, I have no clue why I love this book so much. A lot of it is pretty dull. I mean, it's not until the Revolution starts that things get really interesting. The first book is just setting the stage, then the second book is, again, setting the stage. The third book is when things all go to hell and I start wanting to die. It's not even until the last few chapters that I start really getting nervous, even though I know what's going to happen.*

I mean, we have Carton, who is pretty unlikable and did some dastardly deeds, but has a good heart. Then, there's Darnay who is an upstanding citizen... who just happens to get caught up in some illegal things a few times. You know, it can happen to anyone. Yet, I would argue that Carton is the better man. He's the one who has a truer heart. Basically everyone knows the plot for this book, and the ending, so if you don't want to be spoiled stop here. Because I'm not marking spoilers for a book that's been out for over a hundred years.

Carton loves Lucie. And, it's sort of like the whole conundrum with two men who wanted the same woman and chose to cut her in half because they each wouldn't let go. The one who let go loves her the most because he doesn't want to force her into anything. (I think that's the story. Correct me if I'm wrong.) And, he lets her go. In fact, he does the most selfless thing for her. He decides to die so she can be happy with her husband. And, my favorite chapter is literally him just walking around Paris, knowing the choice he's made.

When [Carton] awoke and was afoot again, he lingered there yet a little longer, watching an eddy that turned and turned purposeless, until the stream absorbed it, and carried it on to the sea.--"Like me."

"I am not old, but my young way was never the way to age."

"I am the Resurrection and the Life, saith the Lord: he that believeth in me, though he were dead, yet shall he live: and whosoever liveth and believeth in me shall never die."**

And, here's where you have me starting to sob: 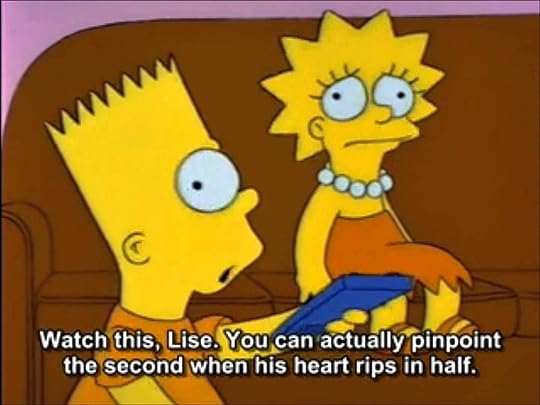 While this isn't a perfect book, I absolutely love it. By now, I've read a few key Dickens books, so I know his style and, by far, this is the best. He doesn't have needless chapters or random sum ups of what happens after the real end to the story. Carton does that. It's a very tightly written book. Everything's important, even the random chapters with Mr. Cruncher and him hating his wife for praying.

So, there. This is one I'd recommend to everyone, especially someone who's never read Dickens before. It's up there with my love for The Picture of Dorian Gray.

*This was likely exacerbated this read through because I chose to listen to the whole album Chronicles by Audiomachine. If you've never listened to it, it's a great way to get some epic reading music. Also, a very good way to induce me panicking for no reason.

**I'm not really a Bible quoting type of guy, but it's a beautiful quote. "I am the Resurrection and the Life."
23 likes · Like ∙ flag

Sign into Goodreads to see if any of your friends have read A Tale of Two Cities.
Sign In »

You're thinking of the judgment of King Solomon, where two women were sharing a bed with their newborn babies, and one baby died, both women claimed the live baby was theirs. King Solomon offered to cut the baby in half and give one to each woman. The true mother was willing to let the other woman have her baby if it meant the baby would live, so Solomon knew she was its real mother.

I loved this book so much both times I read, but I read it so long ago now, I'm pretty sure it would hit me much harder as an adult.

It always hits me hard, honestly. But it hits me a bit more each time I read it. Just the gravity of his choice and the actions he takes for the betterment of himself.

Glad you loved it :)

I also read this in 10th grade. I wonder if I'd like it better now.