liked it
So apparently I'm continuing to read these books out of order. I intended to wait until I read Books 3 and 4 before moving on to this one, but the digital library wait list is taking too long, so…

Take a sip whenever:

* Toby needs coffee (at least she didn't mention her undying love affair with Coffea Arabica quite as often as in the last book, though when she did, it was with cringe-inducing hyperbole. Cringe-inducing not so much because of the repetition, but because Maeve's Big Toenail, who actually chugs hot coffee?!? No, srsly, she actually uses the word "chug" at one point.)

* Toby reminds us that her magic smells like cut grass and copper. As in, Every. Single. Time. She. Does. Anything. Involving. Magic.

See, there are times when mentioning someone's signature scent (hee, alliteration) is interesting -- like when we meet a new character (though, did anyone else think "stereotype" when we learned that Li Qin's magic smells like tea?). Or whenever Toby suddenly smells (view spoiler)[apples and snowdrops -- we know, without being explicitly told, that Riordan's been there (or at least someone using her magic) (hide spoiler)]

And then there are times when it's really (really) unnecessary to mention a person's signature scent. Like every time Toby puts on or takes off her human disguise. We know it's going to smell like cut grass and copper, there's no need to tell us again (and again and again). In fact, by this time in the series, she only needs to mention her signature scent ONCE PER BOOK…IF AT ALL.

* Toby tells us that something scary is a bad sign. Or: "That can't be good." Or makes any other Captain Obvious remark.

* Or reminds us that she heals fast these days.

* The Guards Must Be Crazy. Psst, (view spoiler)[ Treasa! Love the name, BTW. Not foreshadowy at all ;-) Anyway, a little tip: when that pesky detective you've probably heard about -- y'know, the one who's previously escaped from supposedly difficult-to-escape situations and exposed sekrit plots and such -- unexpectedly comes to your domain and asks about a missing girl whom it turns out you, yourself kidnapped (or had someone kidnap for you)…you might want to keep your guards on her while you leave the room. I know, it's highly unlikely she'll go wandering around and discovering stuff, but better to be on the safe side, amirite?

Also, when you've captured McGuyver Daye and thrown her in an abandoned tower, it's a good idea to station some guards outside her door. Though, speaking of those guards, did you know they can actually be shot, even though they're made of air? I don't get it either, but you might want to give them some extra armor or something. But why am I telling you this -- you're famous for your highly effective paranoia!

And just to show I'm not picking on you alone -- Hey, Samson. How ya doin'? I see you've finally captured your bitterly hated rival (well, there was that time you killed him but forgot he has multiple lives, as cats do…and that other time you had him surrounded but then you monologued just long enough to let him escape). Seems like the perfect time to kill him once and for all, right? What's that? Oh, you're just going to bind his hands and feet and throw him in a cell? 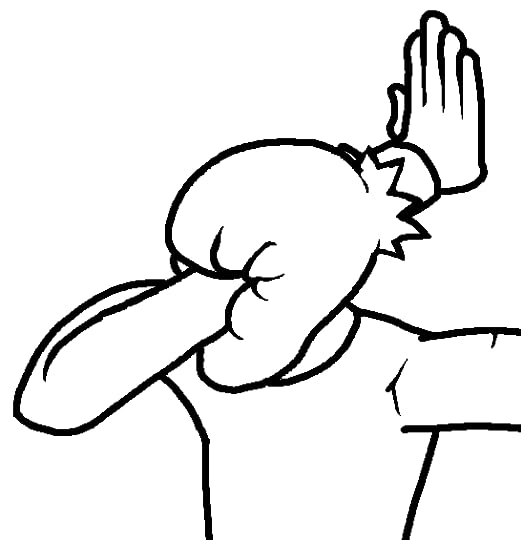 * Toby and Tybalt have a Moment. (view spoiler)[And now, please excuse me while I do a fangirl dance of joy and shout IT'S ABOUT FREAKING TIME. I love how McGuire tries to retcon Toby's nearly six-book-long facepalm-inducing obliviousness. Right, uh huh, she always knew, deep down, that he loved her, and that she was falling for him too, but she couldn't admit it because it couldn't possibly work out, so in an act of self-protection, she convinced herself Tybalt really hated her and that he was only being so very nice to her to pay off debts and stuff. Right. (hide spoiler)]

Ahem. Now that the snark is out of the way, here are some things I LOVED about Ashes of Honor:

* Every time Toby and Tybalt had a Moment. I can't help it -- I'm a fusion of Shirley and Annie from Community in those moments, and I swear, (view spoiler)[by the time the book ended, I'd probably said "Awwww!" more times than this montage.

And, not gonna lie, this is one of my favorite lines in the book:

Dawn ripped the air out of the world, but I already wasn't breathing. Tybalt kissed me through the sunrise.

"...You handed me a hope chest in a dark alley. You took my heart as collateral, and you've never returned it."

* The Labyrinth reference. They. Made. A. Labyrinth. Reference. Dogs in the next neighborhood might have heard my mental squeal.

* That Toby didn't go Bella on me. Er…well, she technically did. Other characters say she did a bunch of stupidly risky things (even by Toby's standards)…but I only saw one of those times, and then the book moved straight into its major conflict.

On the other hand, if I'm thinking objectively, it does throw a reader off when you say a character's been doing all this stuff without actually showing Toby doing much of said stuff.

And I really hope I'm not sounding too cavalier about (view spoiler)[her grief over Connor (hide spoiler)]. How would I react in her place? I have no idea, and hope I never do.

But for the purposes of the story, I'm glad McGuire moved things forward as quickly as she did. She did give us a taste of October's grief at the end of One Salt Sea, in the opening scene of Ashes, and in the other characters' commentary, and maybe that's enough.

* Speaking of which, (view spoiler)[I have a thing for effective closing lines, and the last line of Ashes was just right. Not the most profound closing statement, but fitting for the situation -- hopeful and reflective without being cheesy. (hide spoiler)]

*(view spoiler)[Chelsea's happy ending. It was fair to all parties, and made a nice contrast to what happened with Gillian in the last book -- which, as I said in that review, made sense for its own context. Gillian couldn't have chosen Faerie without losing her father; Chelsea's mother was a special case (hide spoiler)]

None of the deep realms were paradise-- paradise gets boring-- but they were perfect.
. . . . .
"What did I say about sneaking up on people?" asked Li Qin [to April].
"That I should do it only when it was funny."
. . . . .
"Perhaps we should have sent a postcard before departing. 'Deserted heaths are lovely, it's probably best you aren't here.'"

Sign into Goodreads to see if any of your friends have read Ashes of Honor.
Sign In »

You missed the unending LotR references! I should have had drinks through this one.

Oh yes! Who can forget the frequent reminders that the Fae life is (or isn't) like living in a Tolkien novel (as interpreted by Peter Jackson).