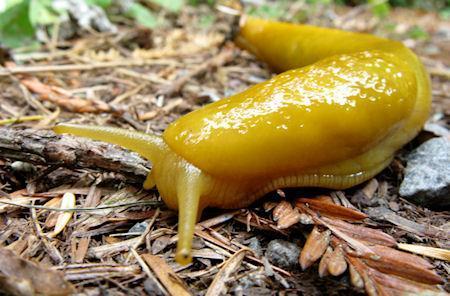 CAN YOU SAY 'SEXXY FUNTIMES???'

when i got my seeecret valentine monster erotica bundle from me seeeecret monster erotica valentine, this was the title i was most looking forward to - erotica about a giant slug?? THIS is why i read these things, to discover the weirdest pairings i can, and point my finger at them and giggle! because it is rude to do that in real life. 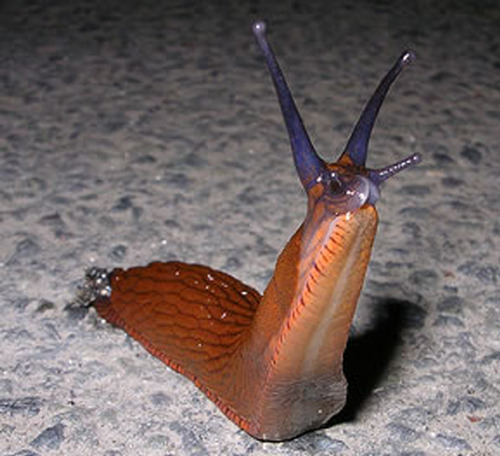 once again, we find siena, fearlessly going off into the world to fight monsters. although at this point, isn't she just asking for it? how many monsters does she have to "yield" to before she stops calling herself a monster hunter and starts being more precise in her job description? one does not "accidentally" do too many jello shots at a frat party more than once, if one is honest with oneself.

you know what you are going out there to do, siena!

or maybe she thought that a giant slug would not have the wherewithal to trick her the way she has been tricked oh so many times before.

but she was wrong.

because although the slug is the strong, silent immobile type, it still has the power of stickiness, and it traps her in its gelatinous folds and proceeds to dissolve both her weapon and her clothing.

"Oh my gosh, really?" Stunned, she flickered a look from her ruined top, to the slug beast. "Are you honestly eating everything but me, is that it?"

ahem. patience, my dear, it is coming...

Wide eyed, emerald pools gaped down into the translucent skin, which she was firmly entrenched in once more, like it had chosen to harden around her again. Stuck in place, her hands at her sides, her legs braced wide, she witness the slow but steady destruction of her clothing. 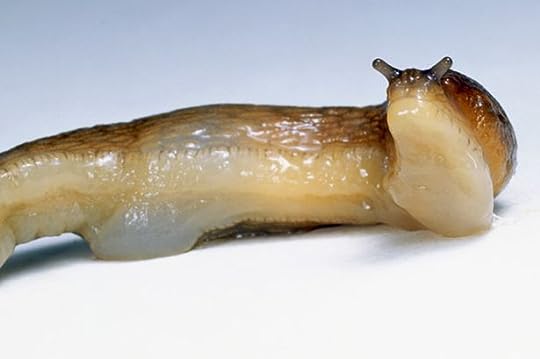 The only thing left to protect her dignity was a soft curl of golden hair over her pussy.
That, too, soon began to melt away, causing her to shout. "Oh, come on!!" 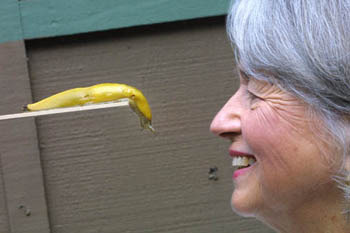 All the little branches running over her flesh were unlike anything she had ever experienced, and her senses were flooding with a heart beating rush of arousal.
"Seriously, what's wrong with me?" She thought in a flicker of clarity.

what, indeed? but whatever is wrong with her, the slug does not seem to mind, and manages to both give and receive intense pleasure with our dear monster "hunter" siena.

but don't worry!! because this time, she is actually going to get her revenge!

(view spoiler)[because the slug slowly starts to dissolve and die in the wet wet swamp. and why???

Pondering on everything she knew about giant slugs, it took her a few minutes before the obvious answer clicked.
"It died because of all the salt in my sweat and such!" (hide spoiler)]

Once more, I'm walking back naked, and with nothing to show." 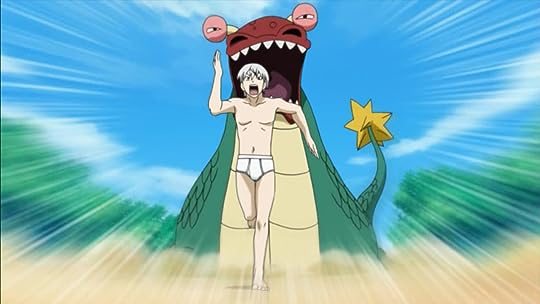 story of her life, poor thing.

if you are interested in reading reviews #1-2 of this delightful bundle, they can be found here and here.

and now my valentine's gift is over and done with. like the slug - snif.

but if i ever track this down: 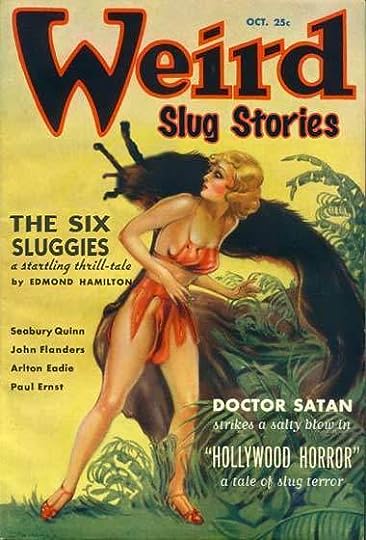 Sign into Goodreads to see if any of your friends have read Yielding to the Giant Slug.
Sign In »

I don't read erotica because I personally don't like it (I like more romance in my sex lol) but I just LOVE your monster erotica reviews. These three were awesome entertainment. XD

yayyy!! i am taking a break for a little bit, but i ahve a good one coming up!

Your picture selection adds a certain dignity (and hilarity) to this entire Siena affair. And that Weird tales cover just teases possibilities, doesn't it? I'm delighted as much as I've been corrupted.

Your review was a treat to read - thank you!

thank you!! i feel like it is really unpopular. i guess everyone is out mardi gras-ing

Someone should alert Tambo.

Ceridwen wrote: "Someone should alert Tambo."

I was just thinking the same thing.

And: Dr. Satan!!! Those stories are so corny, but they're so good.

This sluggy book is pretty good, too: Breeding Ground

I want to read the whole review, but it's late at night, and I'm feeling rather sluggish. I'll try again tomorrow.

Just when I think you've reviewed the freakiest book, somehow you find another! And I would never have suspected a slug in this role, just argh.

Ok, have to ask, WHERE is the 3rd image from the top from? Where the slug with teeth (!!!) is biting the finger? Tell me it's a film and that slugs really don't have teeth (well, they didn't when I took biology) because now I'm afraid to google. (Karen's reviews: Making you fear google image searches for new and unexpected reasons!)

OMG Karen, I love your review. I'm not in slug attraction, but you give me the envy to read it ^^

Richard wrote: "I want to read the whole review, but it's late at night, and I'm feeling rather sluggish. I'll try again tomorrow."

ladym - do we have lending abilities between us?

karen wrote: "ladym - do we have lending abilities between us? "

I don't know ... I'm not sure because my amazon account is in France !

I love the "Weird Slug Stories" cover. ^_^ Doctor Satan Strikes a Salty Blow. Was slug erotica so popular that there was a monthly magazine devoted to it? Amazing!

i don't know how you find these things, but bless you!

Ladymcbeth wrote: "karen wrote: "ladym - do we have lending abilities between us? "

I don't know ... I'm not sure because my amazon account is in France !"

oh, right, and i have a nook anyway.booooo

This is ALMOST as good as tentacle erotica. Although, I do prefer escargot to calamari.

The biting slug pic is from the film SLUGS, based on the book SLUGS by Shaun Hutson, for which he wrote a sequel, which was BREEDING GROUND.

He's pretty much the go-to guy for slug horror fiction.

i am thrilled to know this - thank you!

This review made me never want to click on 'View Spoiler' again.

Guess what? I'm reading Wuthering Nights. Heathcliff and Nelly are just about to git down.

oh my god - let me know when you finish, because i will be eagerly awaiting a review!

This one makes the most sense. Because if you think about it, slugs are always ready for action; they are pre-slimed and there's no foreplay needed, though obviously, Siena doesn't need foreplay anyway because it seems pretty much anything gets her wound and up and ticking.
I think she could easily change her title with the switch of one letter - take the "H" from Hunter and replace it with a "C" and VI-OH-LAH! There ya go.

Thank you for reviewing these and thank you to your secret valentine sender for giving these to you to review!

hahahh!! that is a genius idea! i hope the author is taking notes!

I don't know ... I'm not sure because my amazon account is in France !"

oh, right, and i have a nook anyway.booooo"

Lol, ewww! Just the thought of this has me want to replenish my salt supply.

Does the nature of the slime differ from slug species to slug species? Because the kind we have here start burning your skin almost instantly. I was told that slug slime is the only natural substance that burns through kevlar.

So by Monster Hunter we are to understand that she is hunting for monstrous pleasures?

I just read in the newspaper that researchers have discovered a sea slug that's able to remove its penis after the deed. After which a brand new one will start to grow within 24 hours.

That's what I call hygienic!

God, this is even creepier that the ants' one!

I really love this review, Karen.

And what makes it even better is that I read a totally amazing article on the Science and Environment section of the BBC's web site today. When I read it, I thought that I could write a monster erotica story based on this! 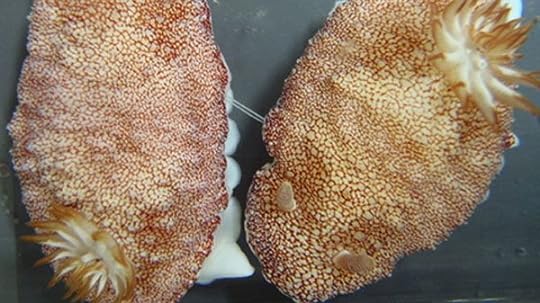 Slugs mating - just before the penis snaps off!

If you take the trouble to look at the story, I am sure that you will be equally amazed by the "related stories," so don't miss the links to the right of the page.

wow, you and loederkoningin are so on top of slug-penis news! you guys are excellent!

i am going to read that as soon as i get home to catch up!

Slugs: the John Wayne Bobbitts of the undersea world...

karen wrote: "wow, you and loederkoningin are so on top of slug-penis news! you guys are excellent!

i am going to read that as soon as i get home to catch up!"

Karen. I promise you, this is truly lollapalooza!

Loved the slug pictures. I think I agree with the central thesis here. She must battle that space slug. It is her destiny.

thank you for thinking of me!

Hahahahahah, OMG Karen! You saved the best for last for sure! I love it. That was too funny!!

Sammy wrote: "Hahahahahah, OMG Karen! You saved the best for last for sure! I love it. That was too funny!!"

I know, right?
And also - confusing...because I don't understand how two sperm can make babies and that video totally makes it sound like the sperm are getting together to make baby slugs. And now I feel like everyone has been lying to me about the makery of babies.

Karen, thanks to you, I had this conversation with my fiance: 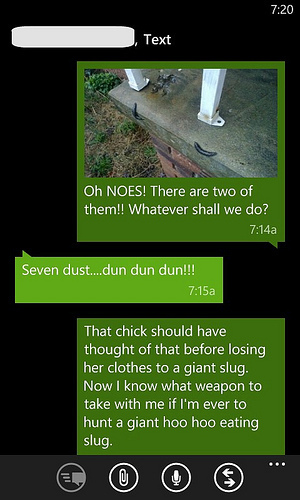 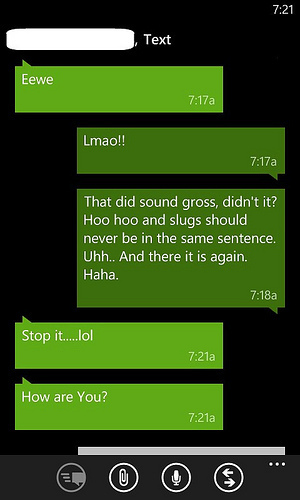 I'm the dark green box, he's the light green box. I made him read this review, among a few others last night. Then I woke up this morning and found these slugs on my porch. COINCIDENCE?! I THINK NOT!

hahahaahah well, don't get into any trouble while he's gone...

Aye, aye. And a can of Sevendust ready to go.

I thought I had liked this one already... funny funny girl! Siena is such a little monster trollop!

i should see what else she has been up to...