Read 2 times. Last read March 20, 2018 to March 23, 2018.
READ #2: March 2018:
Okay I admit, I admit, I read this book 4 freaking years ago and couldn't go on because it traumatised me that much. But here I am, actually going to finish this trilogy (unless I throw it off a cliff). Peoples, it's a good series. It's good. I ACTUALLY HATE IT THOUGH. [insert me sobbing wretchedly] Honestly this has the character death that I think has affected me most, and I've read a lot of books ok.

Ugh I hate it. And I love the book, but I hate ittttttt.

Anyway, just a few things to note during my reread:
• if you reread a book THE TRAGIC HEARTPUNCHING PARTS DON'T CHANGE
• this is odd
• the audiobook is spectacular, also slightly dramatised with the Noise (!!) and I highly recommend
• I found myself very confused the first time, but this time was much better
• It reminds me a lot of Half Bad which I adore!
• And also I just really love how raw and emotional and complex Todd is. He's got to be one of my favourite narrators for how passionate and angry and loving he is.
• Ben and Cillian are the world's best gay dads
• I love how there is pretty much zero romance here because they're fIGHTing fOR theIR LIVES and they focus on that!! How smart.
• AND I JUST HAVE TO (view spoiler)[CRY FOR FREAKING EVER ABOUT MANCHEE. Like it's that moment before he died and he's like: "Todd! Todd?" because Todd was going to leave him and I just fffffuckign can't. I'm going to cry forever. I'm not kidding this is the worst character death ever I just love dogs so much and my own smol soft dog was cuddling me while I read and I think that just made me lose my mind even more. I would've picked Manchee > anything and anyone else. JUST SAYING. SORRY VIOLA. (hide spoiler)]
• I'm a mess
• just go
• (no don't go watch me become a mess for book 2)

Although, (slightly mad here) NO ONE TOLD ME IT'D BE SAD. My feels didn't stand a chance, actually. Gosh. I don't even know how to process this awesome.

I will confess though: I had a LOT of trouble getting into it. It was the voice, the lateral spellings (like "affecshun" instead of "affection", that kind of thing) and the sheer confusion of being dumped in a world I knew nothing about and then taking to like 100 pages to even have any explanations. That made me sad. I was freaked I wouldn't like the book. BUT I DID! AND ALL IS GOOD AND HAPPINESS! (Well, not really. I'm still moping up tears.) I wasn't really engaged until after the first 150 pages.

Also the book is freakishly long. It was a bit exhasuting.

I also went in completely blind. It was very sci-fi-ish I found, as I read. It reminded me a lot of Enchantress from the Stars, which I read years ago for school. It's set in an unknown planet, with lots of settlers who can read each other's thoughts. They call it "Noise". So basically, if a dude thinks it: EVERYONE hears it. But with all that noise everywhere things get chaotic. So we meet Todd, who's nearly a man, and who's the youngest in his settlement of ALL men. Women? Nada. I had lots of whys and whats and whos but I didn't get answers until the end of the book.

Todd is fabulous narrator. And Manchee! His talking dog! And Viola! The girl he finds on his journey. I LOVED THEM ALL. Although Viola did act a bit prissy occasionally...but Todd was very rough and sincere and sweet underneath a layer of sharpness. I really loved reading by him. He was awesome. That is all.

But the writing STYLE is what you want to watch out for. Seriously, it's got different fonts and pages of messy representation of the "Noise" and short cut-off sentences. And weird spellings. I LOVED IT. But I am a fan of weird. 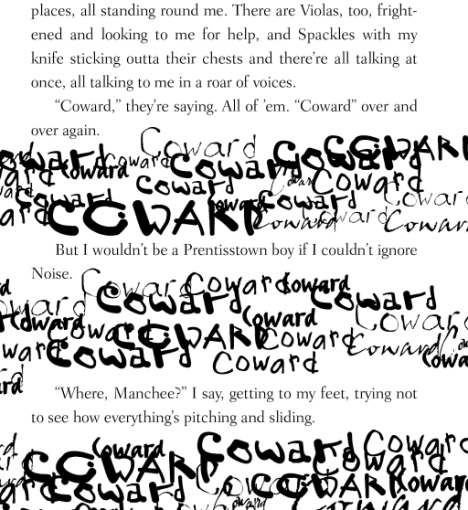 Freakishly cool, right? Trust me: it's nto hard to read. It just takes a bit to get into the rhythm.

Only thing that bothered me? Was the sheer amount of times Todd said "effing" and then informed us that he wasn't saying "effing" (even though that was what's written on the page) with an ambiguous, "oooh, 'cos I'm actually saying the REAL one". But then later, Viola says "fucking". So. Um. Why?

I totally didn't expect this book to steal my heart. I mean, I was actually tempted to throw it at the beginning! I KNOW. Stupid notion. It was freakishly brilliant. I loved the style. I adore this author. I WANT MORE, BASICALLY. SO IF YOU NEED ME, I'LL BE BEGGING MY LIBRARY FOR THE SEQUEL ASAP.
197 likes · Like ∙ flag

Sign into Goodreads to see if any of your friends have read The Knife of Never Letting Go.
Sign In »

“Without a filter, a man is just chaos walking.”
― Patrick Ness, The Knife of Never Letting Go
1090 likes

“We are the choices we make.”
― Patrick Ness, The Knife of Never Letting Go
tags: the-knife-of-never-letting-go
1791 likes

“Here's what I think," I say and my voice is stronger and thoughts are coming, thoughts that trickle into my noise like whispers of truth. "I think maybe everybody falls," I say. "I think maybe we all do. And I don't think that's the asking."
I pull on her arms gently to make sure she's listening.
"I think the asking is whether we get back up again.”
― Patrick Ness, The Knife of Never Letting Go

I don't know if I can put myself through any more emotional trauma with books 2 & 3. Book 1 was rough! We'll see.

I know, right?! And the cliffhanger ending. GAH THAT WAS UNFAIR. I deserve a little closure...or something. *sobs quietly* I think I'm going to need the rest of the series asap. Still don't even know what to rate this!

Like you I was surprised to like this book. I didn't get to the second book yet and I read this one a while ago. Ho hum...so many books...And the cliffhanger? ACK! And the sad part, yup, I was BAWLING!

@The Cover Contessa: Exactly! I was pretty much thinking, "Well I'll just read it and won't worry about the rest of the series since I'm not hooked...." AND THEN THE MIDDLE HAPPENED. AND THAT ENDING. Oh. Oh so not. fair. on. me.

@Mawa: I liked ALL the pages that were...you know, just the nosie or whatnot. ^-^ I just think it's incredibly cool writing, and seriously, does the author go to their publisher and say, "Hey I want a page of just messy writer all on top of each other. Good? Yup, good." Like...it's just so cool!!!

I absolutely LOVED Todd's way of thinking. And he was a bit of a sweetie...like underneath the pride and little manly toughness. The spelling "errors" just threw me at first, because I read really fast and I really had to focus on this one. Ha! Probably that was good for me. XD

manCHEE’S DEATH HURT SO MUCH! but also the narration was so so good and the pages with noise are so creative like how the heck?? and then the cliffhanger HURT ME BECAUSE—SO CLOSE ;-;

Thank you for your spoilery death warning, because I lost my dog a couple of years back and I don't think I can deal with reading this. 💔😭😭😭

this was the best book series ever n I absolutely hated it... my heart was clenched n hurting n I couldn't stop crying :(
I mean I love the character so much ❤️❤️❤️
n MANCHEEEEE 😭😭😭

it was written so well... n the concept overall was amazing