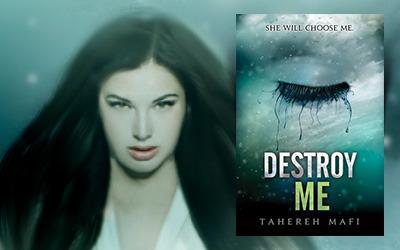 I saw right through him.
You see, I love it when my heart is right.. and right now it still loves Warner to pieces.
Yes, he’s the bad guy.
No, he doesn’t need to convince me otherwise.

If I liked this amazing and complex character in Shatter Me, well now I feel like I’ve been bewitched by him, his dark mind, his fears, and his struggle. I repeat, Warner is not a good person, the world didn’t make him good, the world was not good to him either.. But deep down he had feelings, and I loved the sound of his breaking heart..

Also, seeing the difference in writing, somehow all the confusion and struggle form the first book made sense. Juliette and her disturbed mind mean so much more to me now that I see inside Warner’s head, his calculated (almost sophisticated) way of thinking, his elegant way of speaking.

God, how different these voices can be: Warner and Juliette. I love what the author did here, how she could bring to life such fleshed-out characters, so different but so well defined. This is exactly what I like about an author: to be able to convince me that I’m reading the character’s words and not her/his own.

Also, I can now appreciate so much better Shatter Me, because I understood a few things I didn’t like back then:

1. The obsession with numbers.
Juliette counted her life in numbers, in breaths, so now it makes sense that she always wrote the numbers the way she did.. Her head is full of them – counting and counting, because that’s all that’s left of her. Warner on the other hand is building imaginary walls, securing his mind, emptying his heart when he needs to stay focused, when he needs to protect himself from the outside world.

He is in a difficult position being his father’s son, hating him so much but having to follow his path. In a way he is a prisoner to his world, the way Juliette is to hers. They don’t have much of a choice, do they, but they have so much in common.

2. The repetitions.
Juliette’s brain is quite disturbed. The world didn’t want her, so she spent so much time alone with the words floating around in her mind, obsessing and obsessing about things she couldn’t have. Now that I can see it from “above”, I can get a better picture of all that.. And yes, I admit, I might have been wrong. As disturbing as the repetition were, they were part of Juliette’s mind… I was reading her words and not the author’s.

Warner is the complete opposite. He has been in the center of attention, measuring his words, securing his thoughts, not giving away his feelings. He knows how to charm you, how to read you, how to convince you of everything he wants, because when words are not enough power can back them up quite nicely… and power is what he has plenty.

3. Adam
You know I didn’t like him that much and it made me sad the fact that the cliché seemed to happen: the good boy got the good girl. Wasn’t it such a fairytale?
Oh, you fooled me, Tahereh, yes you did!
I loved your beautiful writing in the beginning, but now I love you as an author, because if you can write such different characters with such different voices, then you deserve all the hype and then some more.

Still, taking a step back to think about it, it makes sense for Juliette to make that choice: Adam was the only one giving her freedom, not pushing her actions, but taking care of her. It was obvious that she would pick him to be her savior.
But now that she left behind a cage for another one, a side of the war for the opposite, will her claustrophobia suffocate her? Will she be the weapon both sides want her to be? Or will she want to break free?

Yes, I must confess that at this point I really hope for Juliette to choose Warner, and deep down this hope is the one making me want to read the next book. And I know that I might be wrong about all this, that I might get to be disappointed in the ending, but as long as I got to be in Warner’s mind for a just bit, as long as I got to see a different side of him, I will be happy.. Because I was right – he is the most interesting character in this story, and my love for him was not in vain.

Now, really.. I can’t wait for the next book. At the end of “Shatter Me” I was not convinced yet… I lost hope, but this tiny book gave it all back to me. I don’t trust Juliette to make the right decisions, but i trust the author to make this story glow.

Oh, I love this review!!! I didn't think about how Juliette and Warner words were so different. But they are. And I loved it so much!!
Can't wait to read the next book!

I thought a lot about the writing style in (and since) Shatter Me, because even though I loved every word, sometimes I found it to be a bit distracting. Juliette seemed to lose focus here and there through all those beautiful metaphors, but I started to appreciate her a lot more after comparing her lines of thought with Warner's.
If her mind was all over the place, he was more calculated, even in his thoughts, but I love them both equally now.

I really can't wait for the next book either.. such a wonderful series so far!

I wish she'd pick Warner too. But I'm worried this might lead into heartbreak. Maybe all she can offer is friendship and understand but would still love and choose Adam. Idk, I hope not. I want Warner to have this. He deserves this after everything he's been through.

I have a feeling that Adam will be the one too.
But hey, not every day you get to love the bad guy in the story ;) At least my love for him so far it's been worth it.

Yeah. Feels good to be one of those few who believed in him since Shatter Me. Adam seems a safe option. He's been the person Juliette loved since she was in school maybe it could turn into habit and familiarity? I won't put it past Tahereh. She's a really good writer. I hope nothing would be predictable in the third book.

you're were totally right - Warner is the most interesting character in this series.

I agree 100%!! Warner' s complexity and depth of character makes me love him all the more!!

I definitely need to finish reading this series. The thing is I loved Warner so much in this novella that I am scared, I don't want to ruin this feeling somehow ;))