Khanh, first of her name, mother of bunnies's Reviews > Harry Potter and the Sorcerer's Stone


it was amazing
bookshelves: all-time-favorites

Rereading for the 3rd time for the group read.

Once upon a time, there was a 10th grader named Khanh who didn't get along with people very well. She wasn't an outcast in school, and all the bullying and teasing stopped with the commencement of high school, but she had always been a bookworm and has generally preferred the company of her own thoughts. 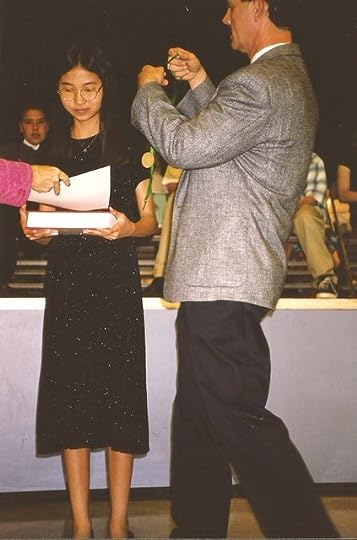 Lunchtime had always been dedicated not to eating, but to sitting in the library, browsing through books.

(Not to worry, she got her nutrition in 5th period in the form of a giant 6-inch M&M studded cookie and a package of Sour Patch Kids and/or a package of Reese's Pieces. Ah, the effortless metabolism of youth.)

One day, there were shiny new books on her school library's "New Releases" shelf. Harry Potter, books 1 through 3. She had heard of the books before, of course, since they were a constant presence on the NYT bestsellers list, but she had always avoided them, thinking of them as children's novels.

At the grand age of 14, surely she was too old for a little kid's fantasy novel. She had read the Outlander series earlier that year, after all. And it had sex in it. SEX! She didn't really quite understand everything in the book, but the point is, she had read them. Surely, at 14, Khanh was ready for more mature novels.

And that did not include Harry Potter. Harry Potter is 11. Khanh is 14. There is a vast difference in their ages. Khanh was a teenager, dammit.

But the Harry Potter books were new. Brand new. They were shiny, they had never been touched by another reader. And Khanh was tempted.

She picked up the first book in the series: Harry Potter and the Sorcerer's Stone.

Sign into Goodreads to see if any of your friends have read Harry Potter and the Sorcerer's Stone.
Sign In »

Quotes Khanh, first of her name, mother of bunnies Liked

Just remembering the first time I read it brings a stupidly sentimental mist to my eyes. I'm not this emotional 99% of the time D:

You have HP glasses in the picture! My respect for you has just tripled.

Summer {is now a Gryffindor} wrote: "You have HP glasses in the picture! My respect for you has just tripled."

Lol! You should see my current pair. They're broken and literally taped up.

I laughed when you said you read Outlander at the age of 14. Did you reread it since then? Please, tell me you did!
Funny, it was the same for me at this age, adult books and fairy tales went side by side ;)
Anyway, great and very emotional review.
Confession time - I've never read Harry Potter. Reviews such as yours always make me wonder if I'm missing something big. I'm in the group read too, and all this commotion is overwhelming, since most of the time I don't even know what people are talking about.
And The Fiery Heart comes out on November 19, so there is this clash of dates. I can't resist the Fiery Heart and I don't combine books well. Still undecided what to do.

Natalia, I haven't! I probably should, but it's one of those things where I want my memory of it to be nice and untainted. Romance novels are tricky, and reading it critically as I do now, I might not be so...happy with the results, lol!

I'll be watching the TV series, though!

There's no time like the present, Natalia. If anything, the first HP book is a very quick read, and quite light, if you don't know how the other books wind up. I would recommend you give it a shot.

Elaine wrote: "Lol, this review is awesome, and so are your HP glasses.
I remember reading adult books when I was a teen and going all O_O at the sex scenes too. It's funny how I steered towards adult when I was ..."

I loved reading the illicit. My parents put their foot down when I started reaching for the Anne Rice. They were so mad when they found out, lol!

Khanh (is Riddikulus) wrote: "Elaine wrote: "Lol, this review is awesome, and so are your HP glasses.
I remember reading adult books when I was a teen and going all O_O at the sex scenes too. It's funny how I steered towards ad..."

Lol, I know right.
My parents never did :P This is what you get when you let your teenage kid go to the library alone, teehee.

I think I saw you doing the Epic group read too. :) Did you take the sorting hat test?

Elaine wrote: "It's funny how I steered towards adult when I was a teen and now I'm just like GIMME THE YA. "

Same with me. I'm downright addicted to YA fantasy.

Khanh (is Riddikulus) wrote: "Natalia, I haven't! I probably should, but it's one of those things where I want my memory of it to be nice and untainted. Romance novels are tricky, and reading it critically as I do now, I might ..."

I understand how it is. Rereading it now for you would be like meeting your high school crush many years after and seeing him with new eyes, without the love spell. Sometimes you'd just wish you didn't.

Khanh (is Riddikulus) wrote: "Elaine wrote: "Lol, this review is awesome, and so are your HP glasses.
I remember reading adult books when I was a teen and going all O_O at the sex scenes too. It's funny how I steered towards ad..."

That's what's happening to me right now, actually. If I get a book with two people kissing on the cover, my parents automatically think it's erotica or something, LOL. But I just started going into adult/new adult, a few months ago I would have felt really uncomfortable with a sex scene.

Summer {is now a Gryffindor} wrote: "Khanh (is Riddikulus) wrote: "Elaine wrote: "Lol, this review is awesome, and so are your HP glasses.
I remember reading adult books when I was a teen and going all O_O at the sex scenes too. It's ..."

Summer, I was the most innocent teenager ever. My parents never even gave me the birds and the bees talk, so reading Anne Rice firsthand not knowing anything about sex was like getting hit with a truck when you were expecting a rubber mallet.

I'm always a bit sad that readers, one of the coolest people in the world, aren't very hip. Worse, they hide in weird places, so they don't see each other that much! Luckily now we have the internet. I wasn't picked on at school, but my reading habits made me feel lonely. Even my friends that read books, didn't read half as much as I did. I think there should be some sort of movement for readers to meet and hang out XD

An: My (and maybe our) collective wish is for us on GR to set up a separate country where every other shop are either bookstores or chocolatiers.

Let's not even think about how the economy's going to operate ;)

Goose: My parents don't speak English, so the only reason they found out I was reading illicit (read: Anne Rice) books at 13 was because my fucking tutor ratted on me. I hate him to this day.

It was one of the Witches of Mayfair books, and I didn't really understand anything but incest and sex. Which was all that mattered to me at the time (the sex, not the incest). I was a teenager, after all. Teehee.

OMG, I totally read the Outlander series in my formative still-a-virgin-but-full-of-hormones years, too! Also, the Clan of the Cavebear series. I still don't know why they let me check those out of the library, but thank heavens they did!

YES! OMG CLAN OF THE CAVE BEAR. Man, that stuff was so dirty O_O Caveman sex!

A curious teenager, just like the rest of us. Think of it as an initiation into the secret teenaged smut club ;)

This is how I was like with the Harry Potter books... now its on of my fav.s

Just great, you made the fangirl cry. D":

Enough said. I understand exactly how you felt.

I was lucky (or unlucky?) enough to pick up the HP series after the seventh book had come out so I didn't have to go through the horrendous waiting everyone else did. Hands down the best books I have ever read.

To be honest, it was worth the wait, because the fandom was so big and hearing all the publicity and the hype surrounding the launch and the special events was pretty damn fun. I'm not a terribly impatient person when it comes to books. I don't really mind cliffhangers, and I don't immediately follow up on a series, so I didn't mind the wait =)

You know... the waiting periods were not only a huge part of the excitement, but also the bonding between us. for 6 years, my friends and I went to the midnight book parties at Barnes and Noble and saw the midnight showings of the movies together. we anxiously counted down years, months, days, and then hours until we finally got a copy of the next book. we then would coop ourselves up for days, only coming out to eat, and then would gather again once it was clear that everyone had finished so as to avoid spoilers. it was a ritual that we treated with the utmost respect and seriousness, and god do i miss them.

You said it perfectly, it was a bonding experience, the speculation and all =)

That's a GREAT story. After I read the first four Of tried to take a break. Impossible!! They are so tempting!

You know I am 14 now and haven't read it yet! I don't know what I am missing but I will read in the near future. HOPEFULLY

It's a gateway drug for many :)

Awww, is that you in the pic? You looked like such a sweet child.

That was me, and look what I've become! :P

You read "Outlander" at 14?! And I thought I was reading above grade level! NICE.

I didn't really get it, though. Reading and comprehension are different things :)

Hahaha this is very true! It's on my to-read list but then again, so are hundreds of others so maybe I'll just end up asking you for the cliff notes.

This must be a really good book if you rated it 5 stars. Should I read it? :D

Hi Khanh
I have written a book called The Cooper Chronicles I think you might like it. You will find it on Goodreads and can purchase it as e-book or hard copy on amazon.com I would love to hear your feedback if you get a chance to read it. Thanks Cheryl

Khanh, this is my favorite review out of all of your reviews! You are so talented, and this completely warmed my heart! xo