GIF: Cristina from Grey's Anatomy screaming, "Somebody sedate me!"

I used to love Disney's Mulan as a kid. It was the only representation in mainstream media I had. As I grew more experienced, I realize that I was grasping for crumbs. In the original, Mulan is a weaver girl who goes to war to protect her father (who is too old) and brother (who is too young). Every choice she makes is to show how far she'd go to protect them and, when offered a reward for her services, she simply asks for a camel to take her home and be a weaver girl again. Disney makes a big deal about how she’s going to be killed because she's a woman in a war and what a Big Meanie Sexist the Country of China™ is, but like...we do have a history of female warriors. The issue was never that Mulan was a woman—it's that she lied to the emperor. She revealed herself of her own volition after the war was over, her comrades were like "cool", and everything was fine. Disney made a big show of the gender reveal and robbed Mulan of her autonomy. They twisted a legend about collectivism and Confucian filial piety into a basic American feminist story riddled with individualism. There were a lot more issues pointed out in this post here. With the 2020 movie, they're trying to peddle the same narrative without any Chinese people on the writing team. Publishing Elizabeth Lim's Spin The Dawn is a great start to making things right.

I went into this book knowing nothing but the basic premise and I have to say that describing Spin The Dawn as "Mulan meets Project Runway" feels like such a disservice. It is so much more than that, especially for Chinese diaspora like myself. Everything from the prose to the world building is beautiful. There were a couple of YA tropes that I'm not fond of. Like I hate the “she's not like other girls” trope, but it was easier to forgive because it's brief and Maia really is special considering the legends she's based on. Her relationships are wholesome, beautiful, and respectful. It's easy for me to empathize with her. Elizabeth Lim said in an interview that she weaved Chinese legends into her story and, while the references are there, she made this tale all her own. Maia and her love interest are the best kind of star-crossed lovers and it hurt so good! Just when you think the obstacles keeping them from being happy together seem manageable, another impossible situation wedges itself between them. Lim also gave Maia the autonomy she deserved and it felt empowering for me to live vicariously through her. I could feel the magic come off the pages and how daunting yet fascinating every task was. Another small detail for me is that I never refer back to maps drawn in Fantasy novels, but this tale was so captivating that I didn't mind flipping back to see where our heroine was in her journey. By the time I finished, I had every temple, palace, and landmark mapped out in my mind and that is such a huge testament to Elizabeth Lim's writing ability.

I was expecting Spin The Dawn to end with the competition, but I was delighted to see that I wasn't even halfway through. I'd stay up until 3AM reading because I wanted to feel the next moment of happiness and feel the next heartbreak. I let myself get swept away in Maia's journey. I sobbed, I laughed, and best of all—I related. I felt seen, I felt empowered, I felt everything. Also, look at this cover! Tran Nguyen captured Maia's essence beautifully—I literally cannot stop staring at this book. Every decision Maia made, she did for her loved ones despite the odds stacked against her. Elizabeth Lim really loves her characters and I cannot thank her enough for making this an ode to Mulan and other Chinese legends like Chang'e. The slow burn romance and the pining was unexpected and absolutely...*chef's kiss.* Personally, I'd like it to be steamier, but for YA, it's spicy enough. Bonus: the protagonist is a Chinese woman and her love interest is a brown/black man—I pictured a darker skintone Claude from Fire Emblem: Three Houses: 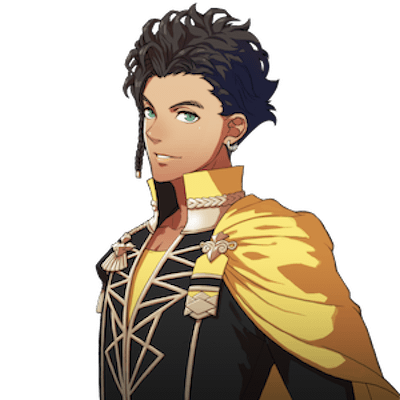 Image: A very handsome, brown anime man with wavy/curly dark brown hair, a braid on one side, green eyes, cunning but gentle smile, wearing one earring, a yellow cape with gold metal plating on his collar (which is popped up), on a black cloak with gold geometric designs parted into a v-neck down to the middle of his torso, and a yellow shirt peeking under the v-neck.

It's an epic fantasy interracial relationship that's not a white person and a person of color (which is much needed). Spin The Dawn was cathartic for me from start to finish and I know this book will be one for me to reread over and over again. Everybody should give this a shot. It's an absolute must if you enjoy fantasy, if you love Mulan, and especially if you want to give more power to #OwnVoices novels.
5 likes · Like ∙ flag

Sign into Goodreads to see if any of your friends have read Spin the Dawn.
Sign In »

“I'd battled ghosts and touched the stars. I'd climbed a mountain to the moon and conquered the fury of the sun.”
― Elizabeth Lim, Spin the Dawn
17 likes