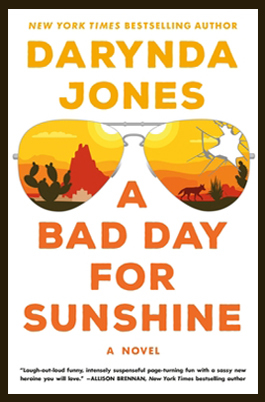 I thought Charley Davidson was a funny and interesting female character to follow. Yet, I must confess that I didn’t finish the series and I'm not sure why except that sometimes life interferes with my reading. I do plan to go back to it at some point.

However, when I learned a new book by Darynda Jones was coming out, I was super excited about it. I've always liked her writing style. As luck would have it, I was given a complimentary copy by the publisher and I couldn't be happier.

I can’t say enough about how entertaining this book was. It has so many good one-liners. The right amount of fun, drama, and mystery to keep me entertained on a Saturday afternoon.

Sunshine Vicram has not been home in fifteen years. She’s back with her fourteen-year-old daughter Auri. Currently, she’s living in a remodeled guesthouse behind her parent's (Cyrus and Elaine Freyr) home. She’s not clear how she got the job, but she’s the new sheriff the Del Sol county in New Mexico.

Her best friend Quincy is a deputy and her lost love Levi Ravinder lives here too. Levi has made his family business legit. His corn whiskey distillery is wold-famous.

*A young girl, a classmate of Auri's, Sybil St. Aubin has been abducted. Levi’s nephew, Jimmy has disappeared at the same time.

*A neighbor's dispute between Mrs. Sorenson and Mr. Madrid about a rooster named P. Diddy.

*Sunshine is trying to remember the details of her own abduction. When she was 17, she was taken and held captive. She had a traumatic brain injury with a month in a coma and with a sequela of retrograde amnesia. Although, lately she has been having some glimpses of her time as a prisoner.

Soon thereafter, her town will have U.S. Marshal Vincent Deleon and Special Agent Carter Fields helping with the investigations. Both are nice to look at. Although, Sunshine's heart belongs to Levi.

If you like Darynda Jones' prior work, you're going to love this one. I was dying to get to the second book in this series right away. I have a desperate need to learn more about Levi and the secrets he keeps.

A complimentary copy was provided by St. Martin's Press via Netgalley in exchange for an honest review.

Sign into Goodreads to see if any of your friends have read A Bad Day for Sunshine.
Sign In »

Excellent review Sheyla! This one is on my list!🤗

Kaceey wrote: "Excellent review Sheyla! This one is on my list!🤗"

Meredith wrote: "Fantastic review, Sheyla! Glad you enjoyed this too--I can't wait for book two!"
Thank you, Meredith. Just like you, I wanted to grab book 2 right away.

Great review Sheyla. I will have to check this author out. *:)

Sandy *The world could end while I was reading and I would never notice* wrote: "Great review Sheyla. I will have to check this author out. *:)"
I hope you do. I liked her fantasy series a lot too.

Great review! This really sounds like a fun read with twist :-)

Margitte wrote: "Great review! This really sounds like a fun read with twist :-)"
You're right Margitte. It was a fun read.

Liz wrote: "Yea, I’m reading this next. Great review."
I hope you like it as much as I did. Something fun during this terrible virus.