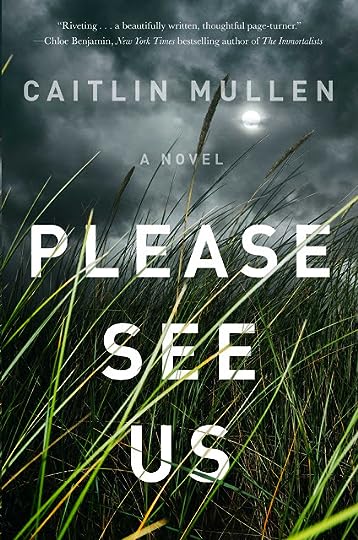 Oh gosh, this book was too DEPRESSING for me. All the women seem to be doom and gloom in Atlantic City. Nowhere to run or survive. All women had to become some type of prostitute to make a living. Very sad characters indeed.

Please See Us narrates the story of a serial killer who is disposing of the bodies of his victims in the marshland behind the Sunset Motel during a summer in Atlantic City.

The "Janes" want to be found. They are all together, all alone without a voice and no one is trying to find their bodies until Clara, a psychic teenager starts having visions about the women. She begins a friendship with Lily, a Casino spa receptionist. With her help, Clara believes she can put together the visions the women are sending her.

Clara's life has not been easy. Her mother left her with her aunt, Des. Des has no scruples. She has made Clara a thief and a con artist. Soon she begins manipulating Clara into agreeing to prostitute herself.

Lily is from Atlantic City but she was living in New York City. She has an eye for art and was dating Matthew, a sculptor until he betrays her in the worse kind of way affecting her work. Lily runs back home to lick her wounds and to create a new her after losing everything.

One more important character is Luis, a janitor who's deaf and blind. Luis has his own demons. He's constantly made fun of and attacked on a regular basis. The police can see it happening but they don't do anything to help him.

Like I said earlier, Please See Us was too depressing to enjoy. It also left me with too many unanswered questions. I know I'm in the minority since so many of my book friends love it. It was just not for me.

A word of advice for readers, this book has many scenes and forms of abuse towards women.

A complimentary copy was provided by Gallery Books via Netgalley in exchange for an honest review.

Sign into Goodreads to see if any of your friends have read Please See Us.
Sign In »

great honest review :) It seems many of us are in a bit of a book slump, I wonder if any of it has to do with what is going on around us ??? I've just read 3* mediocre books in a row and it is kind of depressing :(

Sorry it didn't work out so well. Great review!!!

It could be. I've been stressing at work for a few weeks now.

Wish this had been better for you, Sheyla. I am not up for anything depressing right now, so I will be passing on this. Fabulous review!

Meredith wrote: "Wish this had been better for you, Sheyla. I am not up for anything depressing right now, so I will be passing on this. Fabulous review!"

Thank you, Meredith and I don't blame you. I'm watching romcoms instead of thrillers.