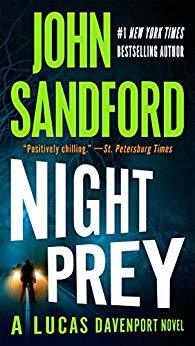 Lucas Davenport is now officially back as a cop working under new leadership. The new police chief
Rose Marie Roux needs help with a possible serial killer. Megan Connell is a Minnesota State investigator who believes multiple women have been murdered, at least one every year.

The unsub's name is Koop. He picks his female victims carefully. Usually, women who are quiet and unassuming. He's also a cat burglar. When he gets into the apartment of Sara Jensen, he becomes obsessed with her. He even gets her perfume to be able to recall her smell.

It's up to Lucas to figure out who Koop is and how to get the guy.

I liked Night Prey. Koop was a completely crazy animal. Sara Jensen triggers in him such a violent response that he starts making mistakes and other people's lives are taken by him due to his frustration.

I like that Lucas is living with his girlfriend Weather Karkinnen. She brings the best out of him. She's smart and funny. Of course, Lucas still has a wandering eye but at least he refrains from much.

Lucas dealing with Meagan Connell was also different. Meagan is dying from cancer and she wants Koop taken care of before she dies. I felt sad for her.

As always in this series, we get funny moments, sad ones and a lot of action too.

I love this series - can't wait to read the newest one! Great review Sheyla!!

Corina wrote: "I love this series - can't wait to read the newest one! Great review Sheyla!!"

Thank you, Corina. I like Lucas a lot now. I'm way behind on this series.