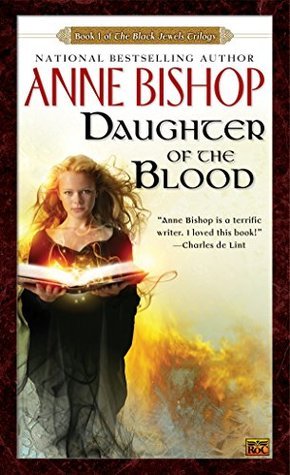 The Others is one of my favorite fantasy series. I've been meaning to read the Black Jewels but for lack of time, I couldn't do it until now.

The one thing I love about the Daughter of the Blood is the 4 main characters.

We have a young girl, Jaenelle who has magical powers who can become the most powerful Witch. She is innocent and has been able to make many friends in different realms. She is not aware of how much power she has, so she does things her own way. Jumping from region to another one using magic without her family being aware. She's so powerful that little things magically speaking don't come easy for her, to the point that her family in Terreille thinks she's without much of a gift.

Second, we have Daemon Sadi SaDiablo, one of the two princes, sons of Saetan. He is terrifying in his "coldness". For centuries, he has been forced to live as a pleasure slave. A pleasure slave that hates being used this way but who sometimes uses it to his advantage when it's necessary. He has a Ring of Obedience which is used to hurt him by Queen Dorothea.

Third, we have Lucivar, the other son. Also a slave in another region. He's less dangerous than Daemon but has a bad temper. Sometimes, he wants to stop the pain but he hopes that someday, he could serve a Queen who deserves it.

Last, we have Saetan Daemon SaDiablo, the High Lord of Hell. He was forced to leave his two sons in the hands of an evil woman who wanted nothing else than to cause him pain and destroy his kids' will in the process.

Jaenelle, a young girl will be the catalyst for these 3 powerful men to dedicate their lives to love her and protect her.

I enjoyed the storyline but I do have to mention, there were plenty of scenes that were hard to read. Most of them involved rape, sexual abuse, and torture. If you can't stomach it, please skip this book.

I'm intrigued enough by the story, to continue reading the next book in this series.

Sign into Goodreads to see if any of your friends have read Daughter of the Blood.
Sign In »

I agree, the first book was hard to stomach, but it gets much better from there. The worst thing about the series, is that it ends. A very sad day indeed.

Michelle wrote: "I agree, the first book was hard to stomach, but it gets much better from there. The worst thing about the series, is that it ends. A very sad day indeed."
Thanks, Michelle. I'm looking forward to the rest. I have the new book and I'm trying to read the rest of the series before publishing day.