Kelly's Reviews > Shadow of the Batgirl

Find out how Cassandra Cain got her wings.

(Full disclosure: I received a free e-ARC for review through NetGalley.)

Let me preface this review by saying that, although I love comic books, I mostly stick to one-offs, new series, or adaptations of stories I love in other mediums. DC and Marvel, with their long-running series, can be rather intimidating - where's the best place to jump in? But I simply could not resist DC's new line of YA graphic novels, penned by some of my YA favorites.

Anyway, that's just a roundabout way of saying that I come into this with little background about the characters, save for what I've picked up from tv and movie and pop culture in general. 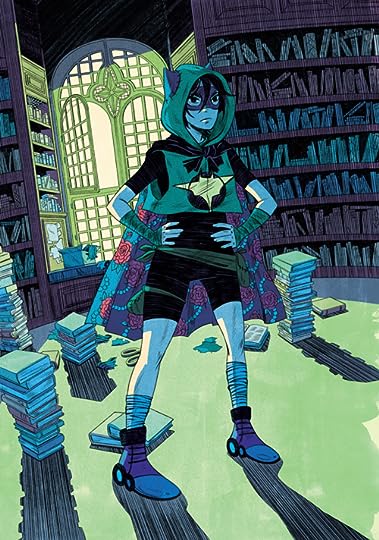 Shadow of the Batgirl focuses on Cassandra Cain, daughter of notorious crime kingpin and all-around baddie, David Cain. Raised by dad and trained to be an assassin, Cassandra goes rogue when she tries - and fails - to kill a man. With his (would be) dying breath, her mark whispers a single word that plucks a long-buried chord of empathy in Cassandra: "daughter." Terrified of what punishment surely awaits, Cassandra seeks refuge in the stacks of the Gotham Public Library.

There, Cassandra learns to speak, read, and write - by spying on the kids' storytime lessons held by librarian Barbara Gordon and, later, volunteering as her intern. Barbara has developed an app called Oracle to help her track the recent crime wave in Gotham, while Cassandra helps her investigate Batgirl's exploits...and mysterious disappearance. She cultivates a found family there in the stacks: delightfully nerdy and welcoming Barbara; Jacqueline "Jackie" Fujikawa Yoneyama, she of impeccable style and delicious noodles; and Erik, a romantic at heart who wants to be seen as more than just a jock. 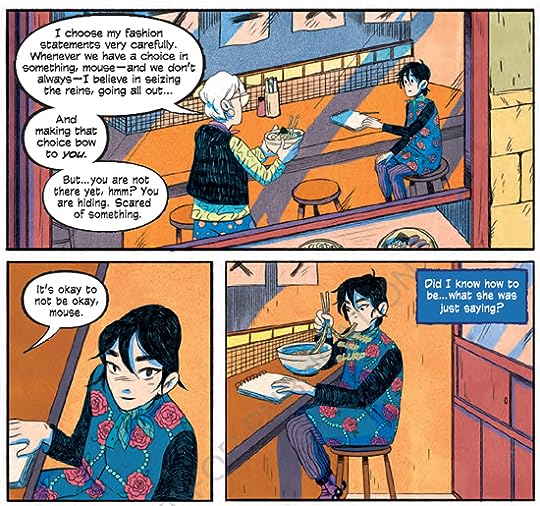 Cassandra wants desperately to be something other her father's weapon, to forge her own path in life and, perhaps, fight for the people and city she loves, just as Batgirl did. But how can she keep everyone safe when her father is wreaking havoc across the city? 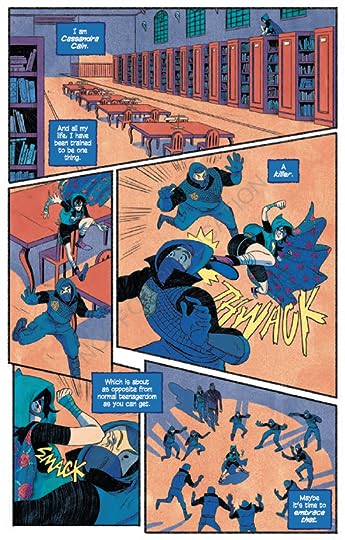 Shadow of the Batgirl is an enjoyable and heartwarming origin story for Cassandra Cain/ Batgirl/ Kasumi/ Black Bat/ Orphan. Written by Sarah Kuhn - who also pens the popular Heroine Complex series - the Asian rep in this story is great. In addition to Cassandra, there's also the awesomely flamboyant Jackie, as well as Blasian jock with a heart of gold Erik, with whom Cassandra strikes up a tentative friendship - and romance (which is no less sweet for its inevitability). I really love these two together - and Cassandra with anyone, really - since she has an endearing, socially awkward Bones thing going on.

I mostly liked the artwork, too; my only complaint is that Cassandra looks awfully young in some panels - others, not - giving it a bit of an uneven feeling. Barbara is adorable, with her oversized glasses, and Jackie is a legit badass who I'd love to have as an adopted grandmother. Erik is swoon-worthy, natch, and the scenes where he and Cassandra geek out over books are the best.

Sign into Goodreads to see if any of your friends have read Shadow of the Batgirl.
Sign In »