Bonnie McDaniel's Reviews > The Light at the Bottom of the World

I went back and forth with this book, vacillating between finishing it and hurling it against the wall. I came close to doing the latter a couple of times, but in the end, the characters pulled me through. And believe me, there was a lot to overcome to get me to finish it, all of which I will get into. Let's just say that for me the good parts of the book were (just) enough to overtake the bad parts, and that may not be true for everybody. Because this book has some major failings.

To be blunt, the worldbuilding sucks. I realize this is supposed to be a post-climate-change, post-disaster dystopia, which is fine. I've read those before and will again, and done right they're some of my favorite stories. However, for that type of story to work, your world, pre- and post-disaster, has to be plausible. This book started out with a somewhat unusual setting, a world of undersea cities--specifically, London--with titanium domes over the residential areas and some of the historic buildings, and acrylic train tubes connecting them. Everyone gets around in personal submersibles instead of cars. The year is 2099. Eh? That gave me the first twinge of unease...that's not very far away, and London is--a thousand feet underwater? And the very first page states this change happened only sixty-five years ago? (Which would have been 2035, since in the book we're almost to the end of the year and century.) I read on, coming to my second point of unease, on page 17:

That was the first place I considered stopping, which I will tackle in just a minute. But the protagonist Leyla's sitation was intriguing, so I decided to plow ahead. I wondered if this was supposed to be some post-climate-change setting, which I was (grudgingly) prepared to grant, even though I knew it wouldn't happen like that. Then I got to pages 38/39:

Commentary from the footage on screens echoes around the space. There are repeated mentions of "Operation Ark" and "the Resurrection Council." Loud boos sound in the room as images of the asteroid approaching Earth flash on the screen. They still have several years before it hits, the prime minister at the time insists. Human beings will survive, no matter how much the sea levels rise. The best scientists around the world are planning the most suitable course of action and preservation, the PM assures Old Worlders.

On-screen, footage now switches to computerized graphics. I tense. The asteroid hits Earth. It's as good as the end of the world. Billions die instantly. Continental shifts occur. All the water previously held in deep subterranean reservoirs is released at an alarming rate. Soon the entire planet is submerged. Only 10 percent of Britons survive the disaster.

That was when the book slammed down on the table.

WHAT ARE YOU EFFING KIDDING ME

Now, since then I've googled "subterranean reservoirs," and apparently this is a (possibly) real thing. There might be a huge underground ocean, not liquid water in the traditional sense but water trapped inside the molecular structure of minerals in the mantle rock. This news broke in 2014, and at the time there was only one example of this material, called "ringwoodite," brought up by a volcanic eruption from approximately 250-400 miles down (the stated depths varied). The articles I found suggest that the volume of water could be three times the size of the current volume of the oceans. I couldn't find anything more recent, and what I read stated that this reservoir was so far found only under the North American continent.

After reading this, I can understand why the author used this plot point, but these articles do not lessen the implausibility of the idea. Here's why.

You know what happened the last time an asteroid of that (apparent) size hit Earth? That little event that took place sixty-five million years ago that had something to do with the dinosaurs? Does anybody see any little dinos (that is, non-bird dinosaurs) running around? Why not? Because they all went extinct, that's why! Furthermore, they sure as hell didn't die off due to flooding. The only flood was the tsunami thrown up by the initial impact (and perhaps a chain of tsunamis--see here), and while that wave penetrated inland for hundreds or thousands of miles, it certainly didn't flood the way the author is talking about. What killed the dinosaurs, and 75-90% of life on Earth, was fire: global firestorms--this first item proven by the layer of soot found in rocks from the time period all over the planet--acid rain, destruction of the ozone layer, an impact winter (later on, after the soot settled to Earth), and then a general heating of the globe due to the massive release of greenhouse gases. Here's a neat graphic from this article illustrating the sequence of events. 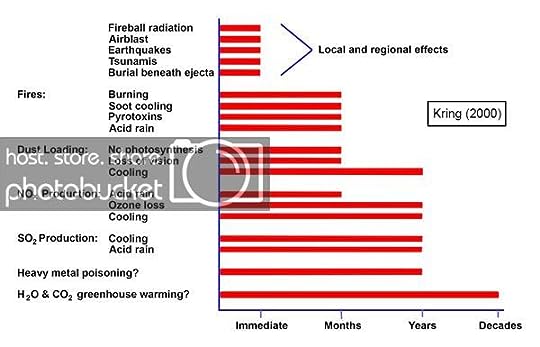 Anybody see anything about planetwide flooding anywhere in that list?

Also, according to these articles, an asteroid strike comparable to the dinosaur-killer would not have penetrated deep enough into the Earth's mantle to release the huge underground ocean. The existing Chicxulub crater is thought to have been only 18 miles deep at the time of impact, and the subterranean reservoir certainly wasn't released then. So it's a nice idea, but it simply wouldn't have happened.

Furthermore, the book contradicts itself in terms of the stated effects. Remember my first quote? "Only a few mountain peaks" of dry land? Where would those peaks be exactly? The highest mountains on earth are the Himalayan mountain range, culminating in the mighty Mount Everest at just over 29,000 feet. So for only a "few" mountain peaks to be left, global sea levels would have to rise something on the order of...25,000 feet. At least. But it's stated right on page 5 of the book, when the protagonist is driving her submersible through the London streets, that "Light from the countless solar spheres a thousand feet up on the ocean's surface highlights the watery depths."

SORRY, THIS DOES NOT COMPUTE. You can't have it both ways. Right now, London averages only a few dozen feet above sea level; let's be extremely generous and say 200. Add one thousand more feet of water on top of that. Simple math states that the planet would in no way be inundated with water. Hell, the town I live is famously a "mile high" (5200 feet). All of the current coasts would be gone, but there would still be a great deal of dry land remaining, and almost all the current mountain ranges.

Of course, that doesn't account for the fact that civilization would be wiped out and the human species would probably be headed towards extinction, along with most other life on Earth. There certainly wouldn't be any sort of industrial complex remaining, above sea level or below (where are they getting the people, materials, infrastructure and supply chains to construct all those submersibles, submarines, titanium domes, and acrylic tubes, for example?). Also, if the asteroid strike is in 2035, the technology needed to construct and support those undersea habitats would not be there. That's only 15 years in the future! The pressure at the stated 1000-foot depth would be, according to this nifty calculator, about 450 pounds per square inch. Not to mention all the problems of human beings attempting to live at those depths (the risk of "the bends" would be a continuous, ongoing thing, for instance).

Nope. Nope. Nope. The more I think about it, the more impossible this scenario sounds. And if I could come up with all this, the editor certainly should have been able to.

Now, having said that, I didn't abandon the book. That's because as much as I hated the worldbuilding and tried to push it out of my mind, I liked the characters. Oh, occasionally Leyla would make a typically dumb teenage decision that made me want to pound on her submarine and yell "ARGH DON'T DO THAT," but for the most part she was a well-written character. She was brave, determined, fiercely loyal to her father, and ever optimistic and hopeful, even in the face of terrible odds. Her love interest, the young man named Ari who turned out to be...something else entirely, was also well-drawn, and I appreciated that their romance was a sweet slow burn. And the AI Navigator, Oscar, running Leyla's submarine, provided a few laughs and a bit of snarky British attitude.

So all this was just enough to make me finish the book and keep it. It may be for you as well. It depends on your tolerance for egregious scientific mistakes (although, to be fair, if the author followed the science of her disaster and world to its logical end we wouldn't have a story). Just be aware that you've got a lot to overlook.
Like ∙ flag

Sign into Goodreads to see if any of your friends have read The Light at the Bottom of the World.
Sign In »