Have Coffee Need Books's Reviews > The Lies We Tell

There is nothing like being the last to know how very you are about someone else. Caiden Cavendish stubbornly chooses distrust in the face of facts that the thing he thinks is suspicious is the least subject him about which to worry.

The premise of The Lies We Tell is the Step-Sib Trope of forbidden desires, which ultimately isn't half as icky as the taboo implies. That Caiden hates Winter, but Winter has the hots for Cade's hate is far more troubling than any piggly-wiggly familial relations. Love is so complicated. 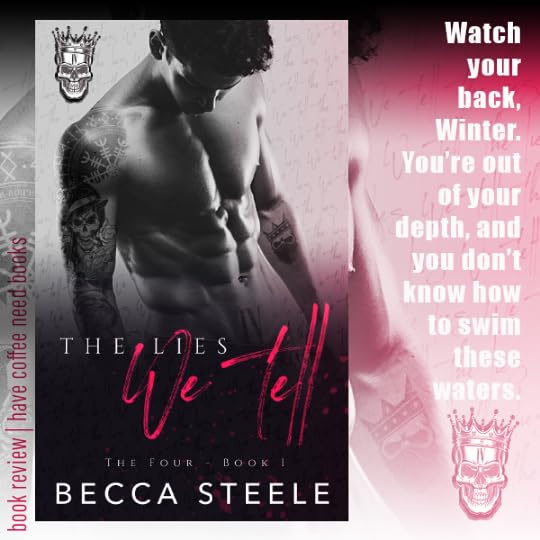 After a life of modest living with her adoring father, Winter is adrift after his death. The one thing she is sure of is that something shady happened to him, and it's connected to her estranged mother. A Wealthy mother who couldn't care less for Winter; her Cinderella story is askew because it's her bio mom who is the witch.

But her stepbrothers are no better than Cinderella's because Cade is a colossal dick.

I love Winter. She's a complex character who I could understand. She tends toward dramatic, and that isn't very pleasant, but her ability to go with the flow is a plus. I enjoy her personality and her dynamic with The Four.

Okay, so in a game of MFK, I am all about K-ing Caiden Cavendish. He's a real piece of work. But I can say of The Four Zayde is the F and Cassius is the M. West is obviously both my and Winter's brother, so he's not part of the game. But Winter and I need to Kill Caiden because he's a bullheaded Weiner, and there is so much work to be done to retrain him.

To be fair, Cade is dealing with the fact that his closest bros are also those propagators of chaos. They are poking the bear every moment they get, and I love the bastards. The boys are well developed and individualistic.

The crux of this story is the mystery is ever-present but feels as if it lies outside the story. The reveals in this are crumby--and I don't mean Becca Steele is leading us with crumbs but more like it's shoddy and we needed a little more of an oomph discovery for it to be satisfying.

I hope book two can continue the pace and stays on track. I have high hopes for the rest of the series.

I voluntarily reviewed a complimentary advance copy of this book.

Sign into Goodreads to see if any of your friends have read The Lies We Tell.
Sign In »