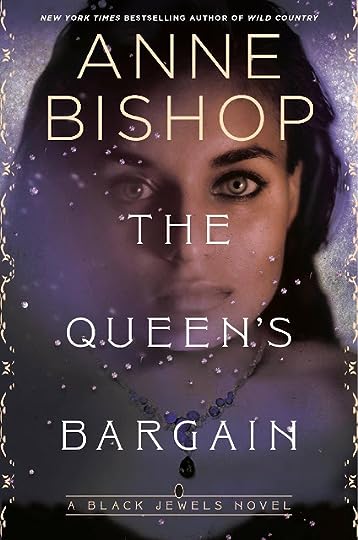 It was a delight to be back in this world!

The Queen's Bargain was great and it left the door wide open for many more things to come.

Jillian is not a child anymore but she's also not old enough. She starts to wonder about her womanhood and soon Lucivar realizes it. He’s not happy she’s growing up but he’s more worried about Marion not been able to recuperate her strength after the birthing of their last child. He’s worried he’s losing her.

Daemon is having trouble containing his daughter, Jaenelle Saetien's new behavior. She feels special after receiving her birthstone. She misbehaves and loses the trust of Khary who attaches herself to Daemon instead.

Daemon is also having problems with Surreal and he can’t seem to contain his “heat”. The marriage is on the rocks and both of them are keeping the other in the dark about their feelings.

So many things happened in this story. All in one cohesive web. There were a really great couple of surprises. So many good scenes between both brothers too. It was fun seeing them act together as a team.

Surreal was a surprise though. She’s usually ready for battle but more than half of the book, I was ready to scream at her and set her straight. Thankfully in, the last part of the book, she was more herself.

I devoured the Queen's Bargain in one sitting and I was sad to see it ending.

With so many new developments, I'm anticipating we're going to get more books in The Black Jewels series.

And now I hope you enjoy it too. Kiss Kiss

A complimentary copy was provided by Ace via Netgalley in exchange for an honest review.

Sign into Goodreads to see if any of your friends have read The Queen's Bargain.
Sign In »

Wow another great review Sheyla! So glad it was 4 stars

Terrific review, Sheyla! Glad you enjoyed this one! :)

omg I need to get around to reading this LOL great review, sheyla :)

Miranda (MrsLeif's Two Fangs About It) wrote: "omg I need to get around to reading this LOL great review, sheyla :)"
You need to ASAP!