Winter King, first in this series, has a gorgeous wrapper. I love the artwork. It’s so beautiful! J.S. Dark, if you read this review kudos to your artist!

Lately, I’ve read a great deal of paranormal romance, reverse harem, and sports romance. I am one of those people who gets focused on a genre and then ruts it until I find something to distract me. I looked at this cover for sometime before I read the book. Then it took a while to write the review for no other reason than the end of the year was crazy. I’m not as late to the party as much as I am late announcing I’m here.

Wyth is in trouble. The faerie realm is in danger. Monsters from the Tywyll Forest are plaguing the people; curses are killing the land. 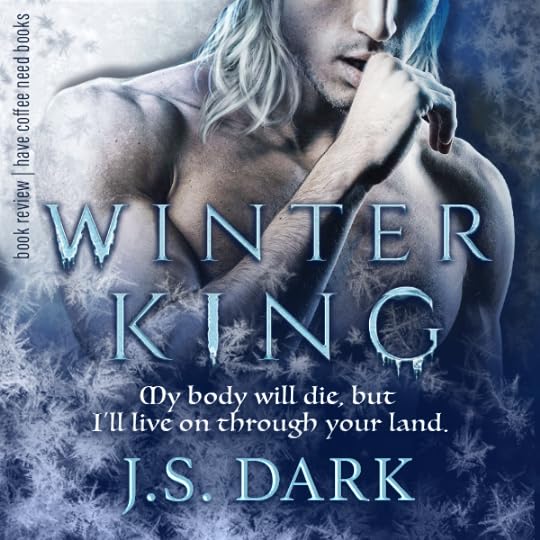 King Cadewyn of the Winter Court can save his world if he is willing to sacrifice a life. One human life. The life of a pure-hearted, selfless human. Amber’s life. But the kicker is Cade can’t just take her life to save the Kingdom. Amber must be willing to be the sacrifice. He plans to show her the beauty and wonder of the Winter Court, introduce her to the residents, let her see the way of life in the Faerie realm.

The King has stupidly misplayed his hand because Wyth has wooed his tribute; the Kingdom is fascinated with Amber. Favored by the goddesses, her presence is fated. Oh, and to his dismay, she is his one and only mate.

I felt at first that the characters were stiff. So formal that it felt uncomfortable, the portrayal of Cadewyn, hollow. J.S. Dark writes the King that way for growth. He becomes less cold and more real as he falls for Amber. But the actual test of his growing humanity is that the goddesses’ ritual requires a sacrifice. Wyth needs a human willing to die for it, but Cadewyn is the one who has to lose his person for the sake of his people.

While Cadewyn, Amber, Chiara, Tenen, Vasant, Kei, and the royalty of the other Wyth Courts are all interesting, the gold for me is the goddesses. I love Haeri, Haere, Haera. The most successful tool used in this story is J.S. Dark’s archetypal representations. The rule, the mentor, the innocent, the magician, the villain, the ally, the trickster, and the maiden, mother, and crone.

I will be jumping into the next book as soon as I have time. The Spring Warrior’s cover is just as pretty, and the story will be killer--I know it will.

I voluntarily reviewed a complimentary advance copy of this book.
Like ∙ flag