Jane's Reviews > Bring Up the Bodies

Where I got the book: my local library.

Now this is where the ratings system gets all screwy. Compared to the run of histfic, Bring Up The Bodies is a 5-star read in terms of quality (I never nitpick about historical accuracy). But compared to my 5-star experience of Wolf Hall, Bring Up The Bodies didn't quite come up to scratch and, although my opinion hovers somewhere around the 4.5 range, being constrained to whole numbers I'm giving it 4 stars to make the distinction.

Get it? Oh, never mind. On with the review.

I thought Bring Up The Bodies started beautifully. The first chapter was masterful, and pulled me right back into Cromwell's head and Henry VIII's court. And then things got a little dry. There wasn't enough of this:

"When Stephen comes into a room, the furnishings shrink from him. Chairs scuttle backwards. Joint-stools flatten themselves like pissing bitches. The woolen Bible figures in the king's tapestries lift their hands to cover their ears."

"Anne's lovers are phantom gentlemen, flitting by night with adulterous intent. They come and go by night, unchallenged. They skim over the river like midges, flicker against the dark, their doublets sewn with diamonds. The moon sees them, peering from her hood of bone, and Thames water reflects them, glimmering like fish, like pearls."

All of those moments where we're in both Cromwell's head and the author's are what I enjoy most. I don't believe for a moment that Cromwell is actually thinking in terms of these literary images, but the glory of literature is that you can take a character's supposed thoughts and pass them through a sort of kaleidoscope of words, so that the author's opinion (history's opinion? I don't know) and Cromwell's form more than the sum of their parts; Stephen Gardiner's scariness, the whole question of whether Anne's lovers were figments of the imagination. It's these flights of imagery that made Wolf Hall transcend the ordinary reading experience for me, and there was a big desert in the middle of Bodies where all we got was dialogue and short, efficient bursts of narrative; well written, indeed, but not exciting.

Perhaps it was the subject-matter at this point, because for quite a while Cromwell is caught up in the political maneuvering that leads up to Anne's demise. (view spoiler)[Spoiler: they snicked off her brainbox with a sharp pointy object. (hide spoiler)] I felt that Mantel got her groove back once that episode was over, the outcome was pretty clear and Cromwell became once more the observer. Could it be that the political stuff in the middle was more fully documented and Mantel felt that she had to cover it, whereas the last third was more open to her imagination? That's just a guess on my part.

Anyway, the book has only diminished my Mantel fangirlishness by about 6%, so I'd still recommend this novel. But read Wolf Hall first.

A note on the language: definitely less confusing in the pronoun department. I ended up quite liking "he, Cromwell," because it gave me a sense of Cromwell's growing power.

Another thought: you can feel Cromwell's star beginning to fall by the last third or so of the book. Or perhaps it's because I know what happens next that I want to shout RUN CROMWELL RUN. It's not going to end well, you know. 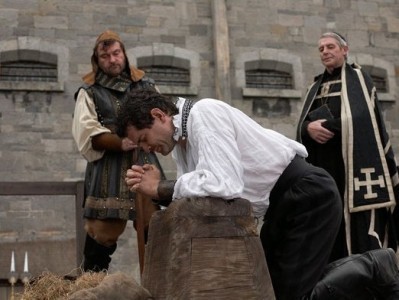 Sign into Goodreads to see if any of your friends have read Bring Up the Bodies.
Sign In »

April 10, 2012 – Shelved
April 10, 2012 – Shelved as: fiction
June 7, 2012 –
page 31
7.62% "Loved the first chapter - the interplay of hunting, politics, and lust... I note Mantel is using "you" and "we" to vary the "he" and that works for me. Only seen one "he, Cromwell" so far - we'll see if that bugs me later!"
June 7, 2012 –
page 31
7.62% ""When Stephen comes into a room, the furnishings shrink from him. Chairs scuttle backwards. Joint-stools flatten themselves like pissing bitches. The woolen Bible figures in the king's tapestries lift their hands to cover their ears."\n \n I love this voice."
June 7, 2012 –
page 38
9.22% "The pearls around her long neck looked to him like little beads of fat, and as she argued she would reach up and tug them; he kept his eyes on her fingertips, nails flashing like tiny knives."
June 9, 2012 –
page 111
26.94% ""He looks up at her. His eyes glitter."\n \n This is the first POV slip I've noticed. How would Cromwell know that his own eyes are glittering?"
Started Reading
June 11, 2012 –
page 243
58.98% "I find the writing to be much more workmanlike than in Wolf Hall - I miss the descriptions, the lingering over a sight or smell or memory. Perhaps it's because there's so much political action."
June 11, 2012 –
page 297
72.09% "The king's body is borderless, fluent, like his realm: it is an island building itself or eroding itself, its substance washed out into the waters salt and fresh; it has its shores of polder, its marshy tracts, its reclaimed margins; it has tidal waters, emissions and effusions, quags that slough in and out of the conversation of Englishwomen, and dark mires where only priests should wade, rush lights in their hands."
June 11, 2012 – Finished Reading
June 12, 2012 –
page 350
86.0% "Anne's lovers are phantom gentlemen, flitting by night with adulterous intent. They come and go by night, unchallenged. They skim over the river like midges, flicker against the dark, their doublets sewn with diamonds. The moon sees them, peering from her hood of bone, and Thames water reflects them, glimmering like fish, like pearls."
June 12, 2012 –
page 407
100.0% "The word 'however' is like an imp coiled beneath your chair. It induces ink to form words you have not yet seen, and lines to march across the page and overshoot the margin. There are no endings. If you think so you are deceived as to their nature. They are all beginnings. Here is one.\n \n And thus we end... I'm too tired to review tonight though."

Really looking forward to this one!

Still haven't read Wolf Hall. OK going to put it on hold at the library RIGHT NOW, this is ridiculous.

Done. Oh how I love library websites. I rather hope I'll be thrilled by this book.

Jane wrote: "Still haven't read Wolf Hall. OK going to put it on hold at the library RIGHT NOW, this is ridiculous."

I have a hardback of Wolf Hall I snapped up on sale, but it is HUGE and daunting. Erk.

Loved Wolf Hall! And yes, mine was a huge hardback I bought on sale :-).

I loved Wolf Hall too! It's absolutely fantastic. I already pre-ordered this and I can't wait to read it.

I still have Wolf Hall to read, lots of catching up to do it seems!

You're too busy reading the classics, Kev.