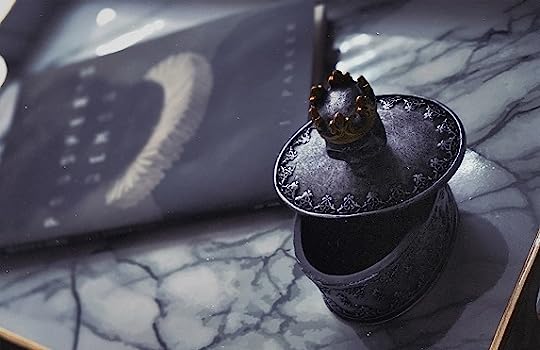 I have an idea you aren't going to like me very much.

By all accounts, the above quote should be correct. A morally grey, snarky, violent, heartless antihero main character? He's awful, truly, absolutely vile at times... and yet, the joke's on you, unnamed narrator, because I happened to love this protagonist.

Prosper's Demon features one of the most unusual devices I've ever read, in that we follow an anonymous narrator who plays both hero and villain in his own story, and the casualties of his decisions are terrible at times. He's more or less remorseless, seeing things as "for the greater good" and all that, and despite how much sick satisfaction he seems to take in his own brutality at times, I couldn't help but devour every page.

The demons in this story are also a bit unusual, and they don't quite follow the "Satan's legion" sort of archetypes I'm used to seeing. They've each got their own little personalities, too, especially this one particular demon our narrator has a long-standing feud with. The utter exasperation when these demons see our exorcist coming is downright hilarious. "You again?"

So, in order to get Master Prosper to like me, I had to give him an opportunity to prove that he was right and I was wrong, deluded, an idiot. Easy peasy.

What is most unusual about this novella, though — and coincidentally, what I adored most of all about it — is that, despite its often dark and violent nature, it is hilarious. The narrator's sense of humor is definitely a dry one, and I laughed out loud so many times reading this. I can easily see this being the sort of book I'll reach for over and over again just because it would be such a fun, quick read whenever I'm feeling slumpy or having a bad day (or just needing a good, morbid chuckle).

Thank you so much to Tor.com for providing me with a review copy in exchange for an honest review!
69 likes · Like ∙ flag

Ah! Sounds like my kind of protag! Can't wait to get my hands on this! 😍

MeaganCM wrote: "Ah! Sounds like my kind of protag! Can't wait to get my hands on this! 😍"

He's SO entertaining lmao. I hope you enjoy it!

Kayla wrote: "I preordered this 😍"

No review needed, just that one sentence sold the book to me ;)

Catherine wrote: "No review needed, just that one sentence sold the book to me ;)"

It is SOOOO GOOD!

Ok amazing cover + great reviews??? Added it to my TBR