Read 3 times. Last read December 2, 2019 to December 3, 2019.
I received this novel from Enticing Journey Book Promotions in exchange for an honest review.

This book rolled through my email as a Cover Reveal Blog Tour and I was all over it like it was cake. OMG! Sometimes I think authors are just at home in their writing caves penning books for me. Rina Kent studied my reading preferences and was like, 'Well, Ali will be all over this' and created Aiden King.

If you are riding the wave of Bully or Dark High School Romance, you will enjoy the hell out of this book.

Deviant King has become somewhat of an obsession of mine. I have read three books of this genre in the last week for review. Some good, some bad, but this book had all the complexity of fine wine, and I kept going back to study it. I read this twice, read the prequel Cruel King from the Noble Savages anthology, and ran out of time to remain soaking in this Royal Elite world.

Heroine Elsa Quinn is white bread. She's on the near side of becoming a sandwich, ultimately waiting to be put together to fit someone's tastes. Without even being aware of her delectability Elsa has been an item on Aiden King's menu from the start. Unfortunately for both of them, she is about to be devoured by a man with a very dark appetite. What King doesn't realize is that sinking his teeth in his Ice Princess will only leave him hungry for more.

But beyond my food analogy, Elsa's character reminds me of a doll--and I thought this before I read Cruel King where Astrid, Aiden's cousin's girlfriend, describes her the same.

This girl is a hot mess. She is more or less defective body parts glued together with weak threads of who she thinks she needs to be for those around her. Dressed up in a world her family wants her to be part of, filled in with enough caution to keep her from looking beyond her nose, Elsa is a people pleaser blinded by her feigned contentment.

And because the world outside of her sheltered home life is ugly, she plays pretend with others so that her Aunt and Uncle have no clue how others treat her at school. And she tells herself she doesn't want to know their motives and purposes in fear it could soil her future. She truly is "Frozen," as her nickname suggests. To know things about others would be to learn things about herself--one of her biggest fears.

Rina Kent is a clever devil. Readers, together with Elsa, are forced to witness Elsa become a 'real girl' through each painful interaction with the monster that is Aiden King. She is training both character and reader to feel affection for the nightmare and molding us to love our cruel bully. But Elsa and we readers are sadly handicapped by Elsa's own refusal to understand why villains become villains. Her obstinate belief that to understand bullies somehow gives them power or a reward is what keeps her that brainless doll.

Now Aiden King is a fantastic anti-hero, but his fellow Royal Court of anti-heroes somehow builds him firmer into supremacy. While it's easy to think that he is the sole piece of power on the game board at Elite Royal, one must realize that the Exchequer is just as capable of manipulating the game as he is. One thing that I didn't see until late into the book was that his pawns are far more deadly than his court pieces. I did a second dive back into this book to see how Kent built this destructive underlayer woven within the narrative. And as Aiden says in Cruel King to Levi: every game begins with two Kings.

I highly recommend this book. I loved it. There are a few dark romances that I felt held some similar plot devices to this novel, but at this point, the genre is littered by derivatives. It wouldn't be possible for an echo not to be heard. AND READ CRUEL KING! It made me more freaking fascinated by the most demented King of the King Kingdom. 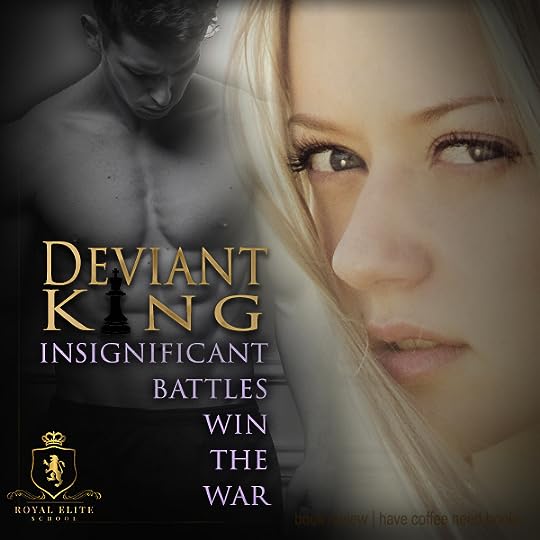