WhiskeyintheJar/Kyraryker's Reviews > A Madness of Sunshine

Anahera is going back to her hometown, a place that she never wanted to return to but somehow finds she needs the comfort of. While there, Miriama, a young beautiful girl disappears while out jogging and Anahera finds herself helping the new town cop, Will, uncover the secrets of Golden Cove and it's residents.

She returned home two hundred and seventeen days after burying her husband while his pregnant mistress sobbed so hard that she made herself sick.

In this standalone, Singh has written an intoxicating mystery suspense. The writing was smooth in a way that sucked me in and wouldn't let me go; I was lost in the beautifully dark atmosphere. Readers are pulled in with the character of Anahera, a woman who grew-up in Golden Cove. Her father was an abusive alcoholic who her mother didn't kick out until he began to turn his abuse on Anahera. While she still has friends that live in Golden Cove, it's not a place of happy memories for her. The background Singh creates for Anahera, abusive father, widowhood that surprises her with a husband who cheated on her, and a miscarriage, all perfectly shapes the character we see on the pages, steely contained, strong, and heartfelt willing.

“Everyone has secrets,” he repeated after completing the maneuver. “It's often the people who look like they have no secrets at all who turn out to have the biggest ones.”

While we're led into the story by Anahera, she gives us the lay of the land and townspeople, the emotional aspect, the new town cop Will leads the technical, murder mystery part that takes over the middle of the story. As a reader, I was emotionally locked in the story because of how Singh quickly and thoroughly created a web spun with the townspeople from Anahera's experiences and feelings about them. This made me eager to follow along with Will as he gathered evidence and tries to piece together the how and why about Miriama's disappearance. While I didn't connect as much with Will, he had his own layered backstory of how he ended up in Golden Cove and gave credence to his feelings and actions. The focus of the story is the mystery of Miriama's disappearance but for those looking for it, the bonding relationship that develops between Anahera and Will, infuses the story with a slow burn romance.

That was the thing with this town---the way the gossip flowed, you'd think you knew everything. But there were secrets here, a thick tide of lava beneath the surface.

Along with the atmosphere and emotions evoked, the details that Singh includes made this story a cut above for me. How Will goes about the investigation and the facts and alluding he finds or is told along the way kept my eyes on everyone. When Will finds out that three woman hikers disappeared from the Golden Cove area fourteen years ago too, the hairs on the back of my neck stood up. If you weren't feeling the atmosphere as much as I, I could see how the middle could drag a touch, as there might be considered one too many red-herring dancing to and away reasons given out. I also thought the villain(s) reveal started to creep into info dump reveal as it went on a beat too long. The ending also felt abrupt but it could be me just not wanting to say goodbye to these characters. A Madness of Sunshine was a small town mystery suspense that showcased the good, bad, and ugly of a small New Zealand town while chilling me to the soul at times and at others, having me smile through the tears.
23 likes · Like ∙ flag
Sign into Goodreads to see if any of your friends have read A Madness of Sunshine.
Sign In » 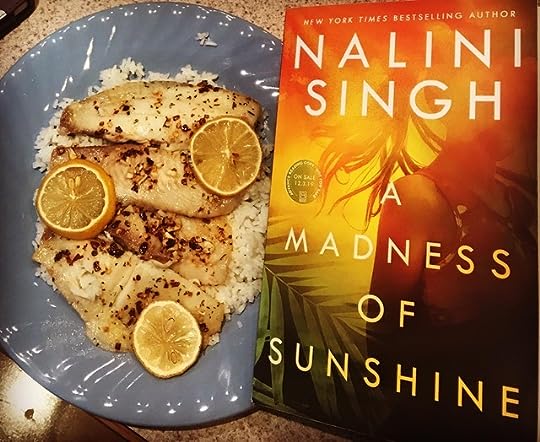 Awesome review!! So glad to see all those stars! Hoping to start this one very soon! 💖

@Julie - Thanks and I can't wait to see what you think!

Excellent review! I haven’t been able to get into this author’s paranormal books, but your review convinced me to read this one. I love believable red herrings, and weeding out the too obvious ones. Is there any romance?

Great review! Yay! We're close on our rating this time. I enjoyed this one a lot, too. :)

@Tandie - There is a blossoming romance between Anahera and the town cop and while it's not the focus, I think there was enough there to please romance readers. I wasn't expecting any romance from the categorization of mystery thriller and was really pleasantly surprised. Singh really drew me into the world and atmosphere, I read this in two sittings. I can't wait to see what you think when you get a chance to read!

@Dorine - Thanks and yay! Oh my gosh didn't Singh do such a great job placing the reader in the setting? It was such an intoxicating story and atmosphere for me to read.

Absolutely! I read it fast as well and thought about it when I wasn't reading it. Easy to visualize from her words.