This book was... a little odd. I think the biggest problem is I didn't click with so many parts of it. The writing style felt oddly vague and slightly disjointed. I found myself rereading pieces over and over again because I was like, "Wait... what just happened?" or "...who is she talking to again?" I just lost track of what was even happening; I couldn't follow along very well for some reason. It was just hard to pay attention.

Everything was just okay. The main characters were okay; I wasn't super invested in either of them. The side characters were unmemorable; sometimes I forgot who was who. The magic was okay, and actually kind of confusing. I'm not sure I ever understood it, but after a certain point I could pretend I did. I wanted to like all the political stuff, but in the end I just couldn't bring myself to get super interested.

After a certain point I realized I wasn't loving the book. I didn't hate it, but I was "eh" about it. Normally I'd DNF because lately I just don't want to be reading books I don't love; I'd rather move on. But, my main motivation for reading this book was for the ace rep, and I hadn't even gotten there yet! View spoiler to see around when it finally shows up: (view spoiler)[60-70% through! For about 2 seconds. (hide spoiler)] Once I hit the ace rep, I skimmed the remainder of the book.

The best thing about this book was the chapter headings. 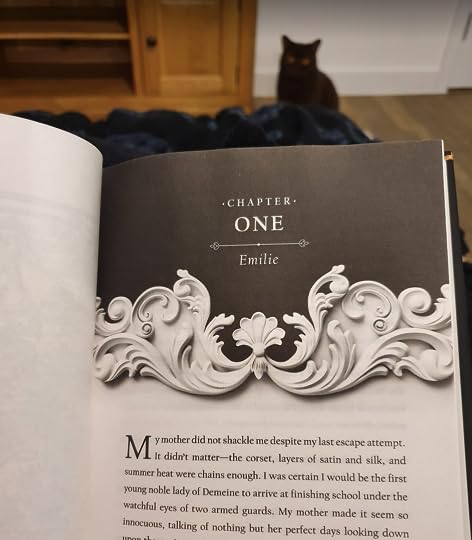