I am so disappointed with the final installment in the Divergent series. It is not just as a result of what happened to one of the characters towards the end of the book that irked me. It was the whole thing. The arc of the story changed drastically. There was a lot of focus put on genes and genetics that had never been previously mentioned in the series. At first it almost seemed as though this was a standalone and not the final novel of a trilogy.

The story started off incredibly slow and at times nothing was holding my interest. I hated the narration in the novel as it was extremely difficult to know whether it was Tris or Four speaking as there were very little to distinguish the two. As a result of the two narrators in the novel some chapters were too short and there was also some jumping in the timeline that confused me.

However the one thing that really annoyed me was the end to the conflict in Chicago. There was no war, no armies, no major epic battles of will and blood and guts and gore. No, Four went and had a chat with his Mother and all was well and good in the world again because they love each other and all that Jazz. This is not Harry Potter Ms. Roth! The Mothers love and care deal didn’t work here.

October 27 2013, 37%
Trying to read this slowly because (a) Its Allegiant (b) The multiple POV between Tris & Four is slightly on the confusing side & (c) I accidentally read a spoiler that I am not looking forward to getting to 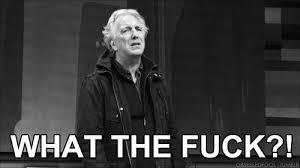 seriously Aisling I can't thank you enough for the two first books! I fell in love with Divergent! I cannot wait to start Insurgent soon!! I never would have had the chance if it wasn't for you and I truly appreciate it!!!!

Alexandra wrote: "seriously Aisling I can't thank you enough for the two first books! I fell in love with Divergent! I cannot wait to start Insurgent soon!! I never would have had the chance if it wasn't for you and..."

Awwww! YAAAY! Glad you enjoyed it :D I keep getting people to read it and so far everyone has loved it. Let me know when you need Allegiant and I can send it along ;)

Seriously girl I am HOOKED!!! And honestly I didn't have high expectations at all cuz I had it in my head it was a total different thing and ya wow was I wrong!!! Aw are you sure???? I have a book to finish at the moment but then I will be reading the second one ahh I am so excited! I just got chills LOL reading makes me so darn happy hahaha

Awww! Yay! Yeah, it isn't as violent and "lets go kill people" as Hunger Games but it's still exciting and addictive..hehe Its no problem :P just let me know when you need it :P ah, me too :) Me + Kindle or Me + Book = Happy Face :D

YES! Very very exciting and addictive for sure! Now I am just tryin to find someone that lives around me to read it so we can go see the movie!! LOL hubby does NOT want to see it haha he wouldn't like it anyways and would prob be making fun the whole time like he does with my other movies/shows LOL but ya I really wanna see what they did with it,hopefully didn't change anything cuz it was perfect! Exactly that is what I like about it, I just couldn't do hunger games cuz of that fact but thats ok cuz I am very happy with this! Aw thank you so much seriously so sweet of you! haha yes!!

I cannot freaking wait for the movie!! I just wish book 3 was better because I dont think it makes for a good movie :(

Oh i am so excited too!!!!! I actually talked my friend into reading it so we can go to the movie together!! lol otherwise i would have to wait till it comes out on dvd!!!! (i dont drive at the moment and hubby would def not watch it with me lol) So i am hoping she enjoys it enough to want to see it!! Cross your fingers LOL

*crossed them twice* hehe luckily I talked two of my friends into reading it and they both want to see the movie now :D

haha thank you!!! Aw yay!!!! I have kinda put Insurgant on hold so she can use my kindle to read Divergent but im glad I did cuz now that i know i may not love the next book its nice to slowly enjoy this one! I am goin to laugh tho when I read Allegiant if i like LOVE it which happens a lot i have noticed LOL im always the odd man out! hhaa

Omg, I only saw this comment now. Like a month later :/ You better not love it missus :P It was baaad..real baaad.

LOL oh that happens to me ALL the time on here! AH i know everyone so far except for maybe one person I know has been saying how they are upset about it!! I need to still finished Insurgent when my friend is done with my kindle! lol

Haha :D A lot of people I know are upset about something that happens towards the end whereas I didn't like it overall. It wasn't what I was expecting :( I keep giving out about it to everyone .

Aw that is such a bummer! I really need to see what its all about!