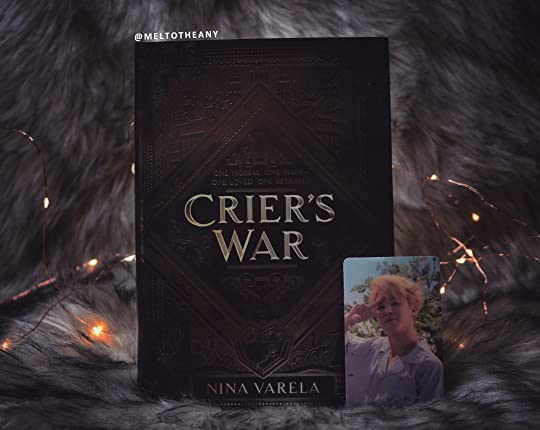 ARC provided by HarperTeen in exchange for an honest review.

“It was never really a choice, was it? Wanting her. Killing her.”

Friends, if you are looking for a book all about revenge, filled with mystery and betrayals, while also showcasing the best enemies to lovers f/f romance I’ve read in a long while, please immediately pick up Crier’s War. I’m telling you right now, this is going to make so many best of 2019 lists come the end of the year, and I don’t even have words for the amount of pure joy I felt while reading this book.

Crier’s War is set in an alternative future where alchemists have crafted mechanical people, called Automaes, who now rule over the humans. The humans originally created them so a powerful queen, who could not bear children, could have an heir, but soon Automaes were forged for other human pleasures. But then they rose up and conquered the humans who originally made them. Now the world is a very unsafe place to live for humans who are still alive after the war, and they are allowed very few liberties.

➽ Crier - Lesbian! A girl artificially crafted to become the daughter her father needs to carry on his powerful legacy, while being betrothed to a man who promises to help her hone that power for both of them.

➽ Ayla - Bi! A human girl who lost her family and everything else after the Automaes raised up and overthrew the humans.

And after Ayla saves Crier’s life, Crier offers her an opportunity to become a servant for her, which is a very high honor for humans. So, Ayla becomes Crier’s handmaiden, while also seeing this as an opportunity to go undercover and maybe seek the vengeance she has been after for so long. That is, until both girls start realizing that maybe they are on the same side, and maybe they could be something more than enemies if they only were able to learn to trust.

“A thought came to her: a story of its own, one that only just began writing itself in her mind: a story of two women, one human, one Made.”

The romance in this book? It honestly gave me at least twenty years on my lifespan! This is the slowest burn, angst filled, most beautiful enemies to lovers between two women of color! It is so expertly crafted and delivered, and it was a tier above the rest. And the alternating points of view, opposing sides, filled with secrets and betrayals; it was just everything, friends. I bet this will be my favorite ship of 2019. True OTP status.

But this story really begs the question of what it means to be human. Is the capability for empathy, love, trust? What does it mean to have be alive? Simply because we are born or because blood flows through our veins? Is it because we have free will and are able to change our outlook on things and people? Or is it because we choose to take on the title human and make it into whatever we believe it to be?

Yet, this story also constantly puts the theme of oppression and privilege at the center of it all. How people appropriate and steal from cultures and pretend that it’s okay, or worse, their own. How dangerous it is for the privileged to not acknowledge their privilege(s). And how oppressors will stop at nothing to maintain the power they have gained that privilege from.

This was such a quick read, and I completely inhaled all 400+ pages and couldn’t put it down. I started it right before a readathon, and I couldn’t stop thinking about it all week, and when the readathon was over I read it in one sitting. My queer heart couldn’t stop smiling, crying, swooning, and evoking every other emotion.

Overall, this was just a masterpiece and one of the best debuts I’ve read in a long while. If you like books filled with political intrigue, twists and turns, a beautiful and horrific backdrop, lush writing, captivating characters, and girls loving girls, I really recommend this one with my whole heart and soul. Also, just in case you aren’t completely sold yet, so many of my friends have compared this to Jude and Cardan from The Cruel Prince, but for the gays, and that is so 100% accurate.

“For the queer readers. You deserve every adventure.”

(Two extra things I need to add: 1.) this is ownvoices for the queer rep + 2.) the author is ARMY = no choice but for me to stan forever. Okay, goodbye. I’m off to pray to all the higher powers for book two immediately. Also, jokes on all of you, because this is ghost Melanie reviewing this, because I died at the tide pool scene.)

omg an intellectual.... we will be reading !

Oh, I hope you enjoy this one! <3 It's up on my tbr after my current read and I just know deep in my heart that I'm going to love it (or so I hope, lmao)

f/f enemies to lovers, Jude and Cardan feels, and machines with feelings?? I need this.

I've been highly anticipating this one so I'm thrilled to hear you loved it! Now I really can't wait to read it.

sara ☽ wrote: "omg an intellectual.... we will be reading !"

no choice but to stan 💖xx

Bruna wrote: "f/f enemies to lovers, Jude and Cardan feels, and machines with feelings?? I need this."

treat yourself, bb; you deserve it 💖xx

Leigh wrote: "I've been highly anticipating this one so I'm thrilled to hear you loved it! Now I really can't wait to read it."

thank you so much, love 💖xx

Looking forward to this! But who's the guy in the picture?

Kia wrote: "Looking forward to this! But who's the guy in the picture?"

The one, the only, Park Jimin 💛xx

What does ARMY mean? I'm so out of touch. ( So as not to "catfish" you guys, this is Jim, Kathy's husband )

Adding this because my bias is in your picture!

Army 💜 Also great review. Will definitely be reading this.

I just realized it was Jimin in the right corner.
Is he your bias?

About to start this and your review has made me 1000% more excited (if possible)!

OH MY GOSH I had no idea the author was an army!!! Now my gay ass loves this book even more.

Full stop on my scroll for the Jimin pic! So glad I read your review. I think I'll start this one immediately because sapphics 🥰 and because the author is an ARMY 💜