Synopsis
A centuries-old vampire haunts the streets of London at night, but he isn't the monster one would expect. Jonathan once fell in love with a human, Anna, who died tragically, breaking his heart.  Now he does not kill to feed, though it would make him stronger. He lives in the feared Raven Hollow Manor with his daughter, an orphaned human he adopted.  Since he does not kill, he is safe from persecution, that is, until another vampire comes to town and this one doesn't share Jonathan's moral code...

Plot
This is a novella, which is both a strength and a weakness. It's a strength, because every word that Caldwell writes serves a purpose to either create atmosphere, plunge the plot forward, or develop three-dimensional characters. It's also a weakness because I wanted more!

This book is rocket-fast paced. It's designed as a quick and tumultuous adventure, rather than a long and arduous trek, which is often the case with Victorian-era vampire fiction.

There are many flashbacks throughout the story, but they felt a little too rushed to my liking. It often felt like a scene ended just when it was really beginning.  Caldwell had a dynamic idea that could have easily been extended into a full-length piece.

The plot of this novel did seem familiar, as if I've read it before. While deemed "horror" the book isn't particularly scary. However, it does deal with some dark themes, (and vampires ripping out people's throats is always considered horror, right?). That said, I would categorize this book more as a compelling mystery masquerading as a Gothic vampire horror.

Characters
While fast-paced, the novel doesn't forego necessary character descriptions. Jonathan isn't a mysterious cloaked figure, but a well-fleshed out character. Caldwell does this through flashbacks as well as present-day interactions with his daughter.

Because of the shortness of the book, we don't get to see as much of other characters, such as the villain (I'll leave it vague since that's a  spoiler!) or even his daughter, Anna. I would have liked to learn more about Anna, her motivations, and maybe experience more flashbacks to when she was first adopted by this creature of the night. What happens when a centuries-old vampire is raising a teenager? I'm hoping that future instalments in this series will give me the juicy details that I want!

Language
Beneath London's Fog reads like other classic vampire stories--particularly Dracula or Interview with the Vampire. The style is authentic to the time period. The writing is also almost epistolary in the way that Jonathan seems to address the reader, but this isn't extended throughout the whole story, which might have disconnected the readers from the action.

While Caldwell uses an older style of writing, this doesn't detract from the quick pace of reading.  There aren't any long, monotonous speeches, as seen in classic horror novels such as Dracula.  That said, there were occasional parts where the grammar seemed stilted, which is to be expected when using this style of writing.

Setting
Somehow in a 100-page novel, Caldwell hits all four readers advisory (librarian-nerd alert!) appeal factors--including setting, which is often neglected in shorter pieces.  She takes her time describing the city, as well as Raven Hollow Manor. She provides twisted history of this building, which was a delightfully dark surprise. But again, I wish she had delved deeper into the beautiful world she created. I wanted to learn more about the madman that had once lived in Raven Hollow, or the monster that apparently lurks deep beneath it. 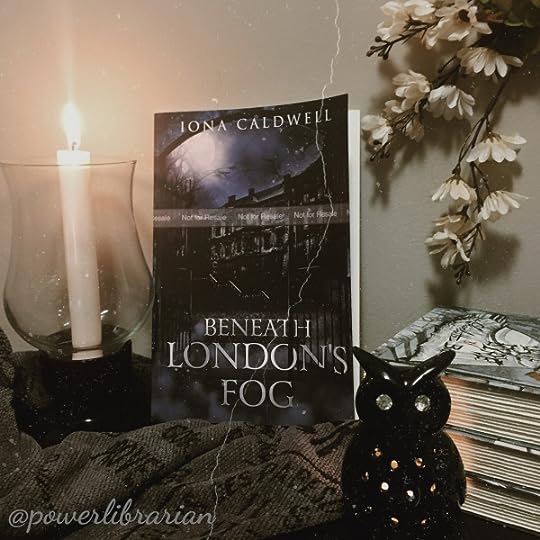 I recommend this novella to anyone looking for a cozy horror story to read on a cold evening while curled up by the fireplace with a cat on one side and a glass of blood--er--wine on the other.

This review appeared first on https://powerlibrarian.wordpress.com/

Sign into Goodreads to see if any of your friends have read Beneath London's Fog.
Sign In »

Thank you for such a kind review!! I'm very glad you enjoyed the book!

Iona wrote: "Thank you for such a kind review!! I'm very glad you enjoyed the book!"