Addictive, spellbinding, electrifying! The Lightning Conjurer is an exhilarating adventure from cover to cover!

You know those rare books that, once you open and start reading you simply cannot set down until you've turned the very last page?! This book is one of them! 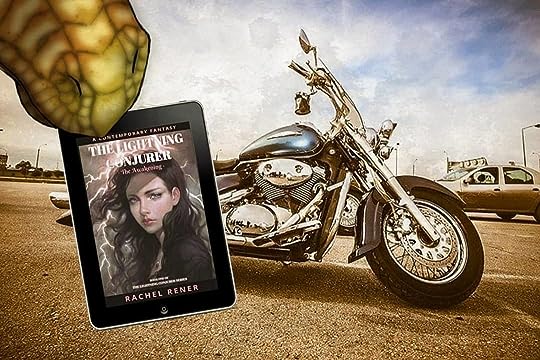 Three years ago, Aspen (as she calls herself) awoke alone in an empty cabin in the forest, not knowing her name, where she came from, or where she was. Since then, she’s been forced to live entirely off the grid, without gas, internet, or electricity. Not because she couldn't have gotten any legal papers, but because one key instinct forced its way through her mental haze from Day One: Don't attract attention. Don't let them find you.

And if you were wondering how Aspen looks like, here she is, the girl on the cover: 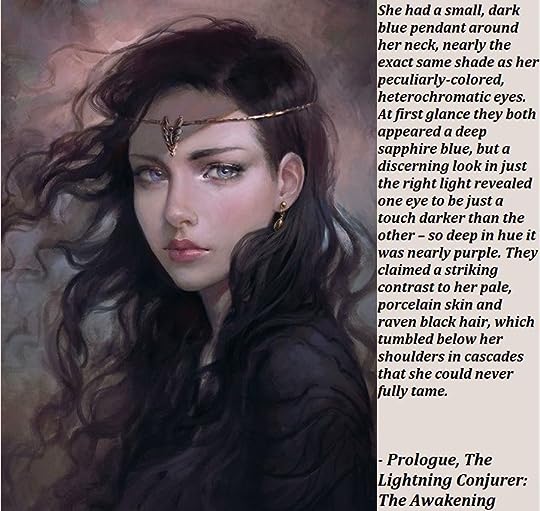 Since Aspen is hiding and mostly getting by, she lives an unsurprisingly and unrelentingly dull life. Until the day a tornado appears out of nowhere and knocks down a truck that was about to run her over. It could have been a fluke of nature, especially since Aspen herself can't explain where it came from, but then her fireplace suddenly explodes while she sits brooding in front of it, and the icy water in her tub suddenly turns steaming hot, just when she was wishing for a hot bath.
So Aspen can't help wondering if she either has malevolent poltergeists haunting her, or she's turned into a hallucinating lunatic. Perhaps both.

The cherry on the incredulity cake is set at the college class she’s auditing, when the associate professor, Aiden, has a problem with her from the moment she sets foot in the lecture and confronts her. She panics, causing the ceiling lights to burst in a shower of sparks and runs off home only to find herself followed by an angry professor who accuses her of spying. And the fact that Aspen is determined to use her cast iron frying pan to bash his head with, only makes him laugh out loud.
Why would an Electromancer use a frying pan for self-defense? he asks? And this is how Aspen finds out what she really is! As Aiden explains, she is like him - an Elementalist; someone who can wield one, maybe two, of the five Elements: Earth, Water, Fire, Wind, and Lightning.
But there’s something very remarkable about Aspen – she’s the first Elementalist in centuries who can wield all five, catching the attention of an ancient organization called the Asterian Order. 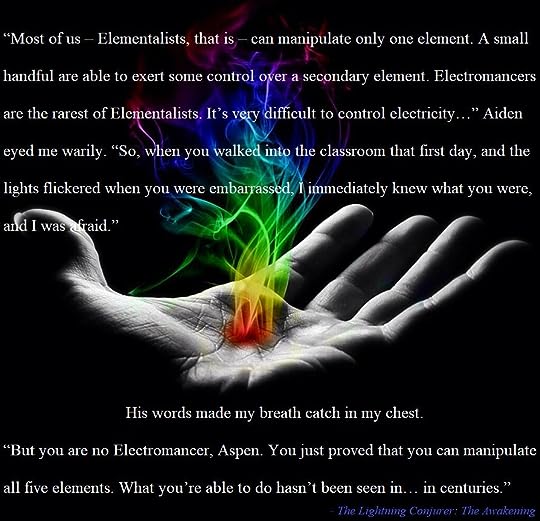 The Asterian Order promises to help Aspen out with everything. From documents to money and help in learning about her powers. It could be the answer to everything, if Aspen would only trust it!
For the first time in the three years she can remember, Aspen starts finding clues about her past and despite being terrified and unsure of what she'll find, she is dead set on getting answers. Since The Asterian Order seems to be the best lead, she allows herself to be courted by them. And this is how her adventure really begins. With powers let out of control and sparks flying! No. Not romantically that is! But literally, like this: 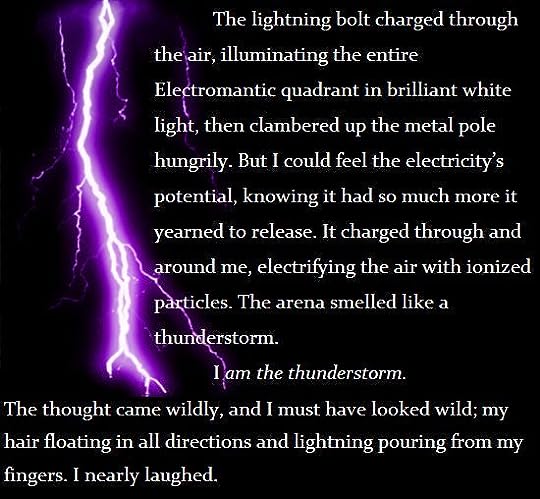 In a beautifully flowing prose, Rachel Rener gives us here a mesmerizing fast-paced adventure with a unique take on elemental magic and a superb female lead. I loved Aspen and her build-up as a character. She isn't one of those cool heroines who know and are able to do everything from the very beginning and this is exactly what makes her both real and wonderfully written. She is afraid and alone and insecure. She is hungry for affection but aware that she may not be considered "worthy of attention". And despite all that, she gathers her courage and grabs the proverbial bull by the horns!

Yes, by the end of the book you may end up considering her the most badass Elementalist in modern history , but her journey to achieve that status is what makes her real special! 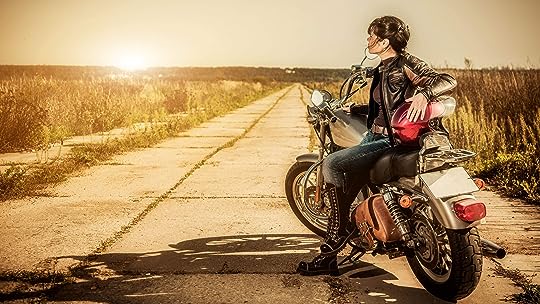 I've read The Lightning Conjurer in one single session, glued to the pages and spellbound. And right now I'm diving straight into the sequel, because I want more!!

If you like magic and adventure, superb characters and a great slow burn romance, this is the perfect book for you!
You have got to read this people!

Sign into Goodreads to see if any of your friends have read The Lightning Conjurer.
Sign In »