It's an overwhelming book- an elegant and profound hybrid of theology, ontology, religion and mythology; all of these elements condensed to produce one of the best outcomes in weird fiction and horror, unique in every way. 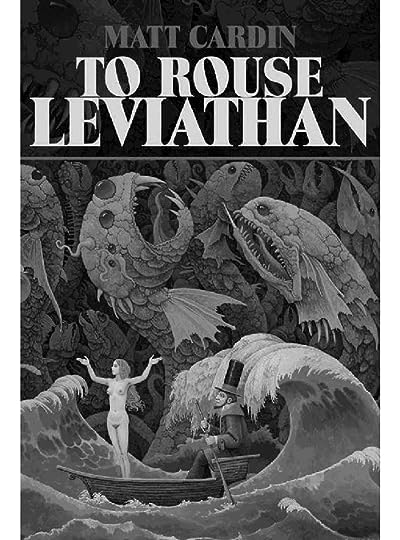 I believe it covers the entirety of the author's work, spanning more than a decade. Some pieces have been significantly revised and polished for this very collection. Isn't that juicy?!

First let me start by saying this that Matt Cardin is one of those current and active authors whose fiction Mr. Thomas Ligotti himself enjoys very much, as he said in his interviews several times. So, there you go. If you find Ligotti a genius and visionary and enjoy his works, this should suffice enough about Matt's capability.

Matt's prose is beautiful. This is among two of the most delicious aspects of his writings that I've been able to discern; it's like an eyeful of blissful panorama (pardon me for such an analogy but you'll get I mean), which is at the same time brutal and pleasingly suffocating with the suspense that is created in his stories, with uncanny vividness of situations and psychology. This is the second one. I believe if Matt were to become a "bestselling commercial" suspense author, he'd do it effortlessly.

There's an apparent musical quality to his craftsmanship. I don't what type of musical score I'm talking about, but everything contained within a fictional narrative seems to gain momentum, never too paced or slowed, and soars higher and higher until it cracks over the reader, releasing the monstrous and the unreal in all its dark climax. I'm wondering if Matt himself listens to music while he writes...

If desired or intended, I've seen him getting from subtle or implicit atmospheric horrors that is so commonly seen in the genre to a more visceral and hardcore type, and sometimes mixing both of them. At some moments in some stories, I truly felt a kind of sickness in my stomach.

I wouldn't be able to comment about every story, at least not now, but this review will get edited as I intend to revise the stories from time to time.

Let's talk a bit about my top picks from this collection...

The future was a dark, empty road winding through a blasted landscape toward the shell of a dead city. The journey was a nightmare and the destination a hell. My former goals and pleasures littered my psyche like the dry corpses of dead loved ones, and I wanted nothing more than to sink into oblivion, whether sleep or death did not matter.

This is from "Teeth". It's one of the best cosmic horror and weird fiction I've read. The description and horrific knowledge of the revelation, piecing evidences from quantum mechanics, philosophy and gluing with it the raging chaos of today's world, there's no escaping the helplessness induced in this story; it's too much realistic, like seeing real events unfold inside the mind and consciousness. I'd suggest this story to start reading Matt's fiction, just to understand what you're getting yourself into...

I absolutely loved "The Stars Shine Without Me". I love that title! Just from the first page, I got that "corporate horror" vibe introduced in Ligotti's fiction, but this isn't necessarily just in that canon. The story is short compared to the other works (except another short piece named "If It Had Eyes"), but the vision that is described here and the cosmic extent to which it spreads, is all too poetic and grand to behold. It's hard to pick which of the stories is my most favorite, but this story comes up first every time I think about choosing one (nevertheless don't quote me on that!).

"The Basement Theater" is another favorite of mine. It's pure Ligottian, in my opinion, and in that sense an amazing production and tribute to his corpus. I just wish if it were a bit longer!

There are two beautiful collaborative works in this book, with Mark McLaughlin; both of them are pure genius. The first one is "Nightmares, Imported and Domestic". It's a stupefying and all the more confusing existential horror that explores, in Matt's own words, "the Hindu metaphor of Indra's net, whose nodes of jewels generate infinitely regressive reflections"; here's the art of taking an idea and telling a horror story about it, using art and artist(s).

The second of the collaborations is the last story in this book: "The Cherished Place at the Center of His Plans".

He wanted to negate everything, to obliterate it all, to overturn the universe and see them all- including himself- gaping in horror as the stark glare of revealed reality annihilated their blinkered denials and the world they protected.

The emptiness in his chest had become a bottomless abyss that would eventually swallow the rest of him, leaving only a hungering darkness in the shape of a man.

It's another story centering around an artist, whose "gruesomely repulsive artistic imagination" has made him a luminary figure, through the productions of utmost singular paintings that transpires his dark imaginations. The rituals and mental customs where the artist seems to indulge himself, the visions and inspirations, the teeming atmosphere, read like getting myself into an unique psychedelia to me. The surreal taste in story is an utter delight to savor. I should mention that the names of the various paintings can be made into excellent story titles themselves: The end of It All, The Luster of Yellowed Bones, The Hatchlings...

One of the most obscure stories for me, but that I loved for it's reality and experimental approach, is "Blackbrain Dwarf". And yes, it's one of the more hardcore types.

"Prometheus Possessed" is a horrific mixture of science fiction, philosophy and religion. It's certainly one of the standouts in the whole bunch.

The novella "The God of Foulness" felt like an apocalyptic onslaught that seems to be in the making, when an old religion gets revived, deities that "haven't been worshiped for nearly six thousand years".

I can't ramble on much without repeating myself stupidly. If I want to be more discreet and verbose, I need to reread these tales again, and this review will get heavily edited in the coming future. I read the entirety of this book late into the nights, in winter, which ended a couple of days ago, which made revelatory supplements to my delight in reading it.

At the end, those who really want to put themselves under a spell of some prolific tales in the horror and weird fiction genre, buy this. It's worth it. This book has become one of several that I wish to possess in the paperback form in the future when I have enough money to do so.

... the way I saw the world currently when I was in one of my darker moods: full of suffering, devoid of meaning, going nowhere.
7 likes · Like ∙ flag

Sign into Goodreads to see if any of your friends have read To Rouse Leviathan.
Sign In »