Thank you to Linda Hilton for the rec :)

This book was so much fun, Raiden wanted to get into the spirit. I told him to give me his best pirate mean mug 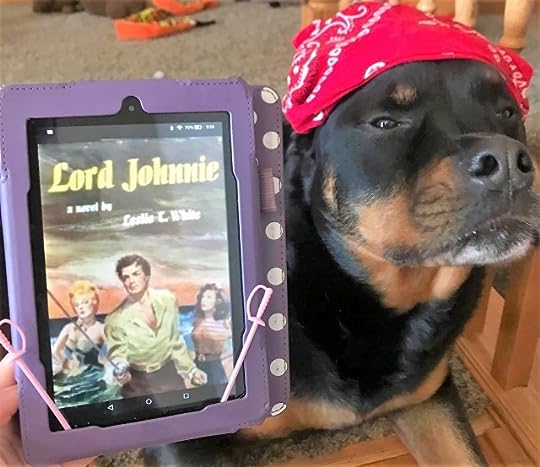 He did not disappoint, lol.


"The road of life leaves as strong an imprint on the man as the man leaves on the road, Johnnie. We are all the fruits of our experiences. You can't change that."
"A bitter truth," he agreed.
She studied him a long while in silence. "That girl has altered your outlook, hasn't she?"
"Let's say she clarified it, your Grace."

If you're a fan of Errol Flynn movies or any of variation of Robin Hood tv shows, you'll want to get a copy of this.

Johnnie Rogue was born a bastard, his father supposedly died at sea and didn't make it back to marry Johnnie's mother, while she died in childbirth. With an English mother and Scottish father, living in France was difficult and Johnnie had to turn to thievery to survive. When he makes it back to England he becomes a bold and brash highwayman who eventually gets caught.

Lady Leanna is dangerously in debt and looks to marry a condemned man, using the loophole of her "husband" being responsible for the debts and when he gets hung, the debts are wiped out because he paid for his "crime". As rogues are want to do in these stories, Johnnie escapes the hangman's noose.

"All right—I'll be honest, I'll tell you something I never spoke aloud before, because, until the moment you walked into Newgate, it was nothing but a vain, silly, hopeless wish." He talked rapidly, as if trying to keep ahead of the restraint of reason. "I have always wanted to be a gentleman! I've hated sordidness and poverty, hated coarseness and vulgarity. Then, miraculously, you came into that hell-hole and married me. In that I saw the hand of Providence. I would have been a fool to have thrown the opportunity away."

While Johnnie might be a rascal, he's actually only wanted to live a lawful life, poverty and circumstance led him down a different road. When he finds Leanna after escaping death, he sees her as his salvation, Leanna does not feel the same way as she has someone else in mind for marriage. There's a sex scene that fades to black very quickly and a deal struck between the two that after one night of pretending to be husband and wife, Johnnie will disappear from her life forever. They leave on good terms but a later possible betrayal leaves Johnnie bitter towards Leanna and leads him to berate himself for thinking he could go legit.

These sodden creatures were without initiative; blindly they subscribed to the old rule of the sea: Grumble you may, obey you must.

We leave land to take to the high seas because Johnnie gets captured by the press gangs, which eventually leads to him starting a mutiny and becoming a captain. He decides to travel to America, because he saw Leanna board a ship with her beau headed there and decides he can't live without her. This desire for Leanna feels a bit empty because the reader doesn't really "know" Leanna and what we do of her, doesn't make her a sympathetic character as Johnnie is the lead and is the one the reader's are endeared to.

There is some high seas action and conscious searching in regards to Johnnie helping out England in what is the tumultuous climate of America and England about to go to war and France slithering around. Strong secondary characters help round these parts, Ben Bottle - also press ganged and helps Johnnie pull off the mutiny and becomes his right hand man, Old Ames - Johnnie searched him out to get information on his father, Ames gets press ganged with Johnnie and becomes his source of information on how to survive at sea as Ames is an old sea dog, and 1st Lt. Yew - forced to stay on after the mutiny and spends most the time being frenemies with Johnnie. There are a couple others, like the Duchess of Tallentyre, Reggie, who I would delight in reading their own books.

For first being published in 1949, this has aged remarkably well. The dialect of the sailors was a little hard to read and understand, forcing me to reread some parts and Johnnie's friend Ben had a tendency to use the saying "Rape me" as a sort of replacement for "I'll be", which threw me a couple times. Other than that, the writing, characters, and story stand strong in this time.

For me, this was more of a swashbuckling adventure than romance. We hardly get to know Leanna and she and Johnnie spend very limited time together. This was more of the journey Johnnie goes on and the five women who send him on it: Mother - dies in childbirth, Leanna - marries Johnnie, betrays him, and inspires hope for him to go legit, Moll - starts off as his friend helping to rescue him only to betray him, Mrs. Bloodsymthe - helps reinforce his loyalty to Leanna and rescues him after she sees him as rescuing her, and Reggie - helps him get the opportunity to escape New York.

Johnnie stays loyal to Leanna after he meets her but he also has a moment where he kidnaps her in front of society, thus taking away any decision she would have made and ruining her reputation; he does eventually leave her to make her own decision on staying with him but I wish we could have gotten a stronger sense of her feelings.

All in all, this was so much fun. If you miss Errol Flynn characters, Johnnie the Rogue's courage, ingenuity, charm, luck, and wit, while longing for Leanna and a life of legitimacy, is a story you'll want to pick up.

Johnnie the Rogue is dead, and John Ballantyne has emerged.

This is turning out to be some swashbuckling fun!"

Raiden looks awesome as a pirate dog ! 🤗😍 You ought to get him a consultation at a pet modelling agency. Lol. Great review ! : )

Thanks!
We have to be causal about the modeling or I’d been in danger of turning into a stage mom 😂