WhiskeyintheJar/Kyraryker's Reviews > Nothing to Fear

Someone in his unit, someone they trusted with their lives, had murdered a suspect in custody— here in the ultrasecure facility right under their noses.

The Gray Box is a so deep undercover organization in the US government that even people in the know don't know about it, and they have a mole. The first in the series, Every Last Breath, introduced us to the Gray Box and the men and women working to keep America safe. The idea of a possibility of a mole is talked about there and by the end confirmed, Nothing to Fear is the story of Gideon, known as Reaper, going rogue to protect one of their programmers and hackers, Willow, from being set-up by the mole. You could start the series here but you'd miss out on the foundation of character relationships and the author does such a great job of constructing the plot that I think it is worth it to read the series in order.

When he looked at her, he didn’t see a target or a mission. Only an exquisite woman, tender and sweet, ready to open herself. She was giving him the precious gift of her trust— a miracle and a mistake inextricably tangled.

Nothing to Fear was just about a non-stop action ride that I highly enjoyed. As this is romantic suspense, I do think the romance could have been a bit stronger but if you enjoy action and a strong plot, this is a must read. For me, not completely feeling Gideon's character contributed to the romance not feeling as strong. He's infused with more emotional bearing than the typical alpha males in this sub-genre but the slower reveal of his background kept me from knowing him. At the end there was also a bit too much, “I'm not good enough for her/I'm too damaged” that starts to feel angst for angst sake after reading the majority of the story where the couple has already fallen in love. Our heroine Willow felt more like a complete character and her always feeling like an outcast because of being on the spectrum will tug at some hearts.

The power she had, to have him unraveling with a look.

This is the second book I've read by this author and while I've enjoyed the lead romances, I think where this author really shines is her ability to construct these twisty turn-y, high action plots carried out by main characters you want to fall in love and secondary characters you become wildly impatient to read their books. The concept of a super secret government group isn't new to the romantic suspense world but I do feel this author is top notch at pulling it off. The ending conclusion and wrap-up on some of the mole plot was a little rushed (the main baddie had a background that I would have actually liked explored more) but for the vast majority I was locked into the action and flew through this book.

If you like romantic suspense, I highly recommend this series. The romance does take a backseat at times but you'll find yourself invested in all the characters and the engaging plots. I can't wait for the next in the series.
8 likes · Like ∙ flag
Sign into Goodreads to see if any of your friends have read Nothing to Fear.
Sign In » 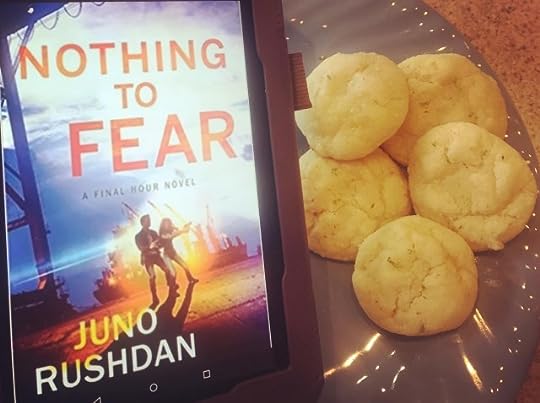 "
October 26, 2019 – 50.0% "When he looked at her, he didn’t see a target or a mission. Only an exquisite woman, tender and sweet, ready to open herself. She was giving him the precious gift of her trust— a miracle and a mistake inextricably tangled.

The first half of this has been superb romantic suspense, been on the edge of my seat a couple times."