Coming from a legacy of actors, Freddy is only twenty-three and has been acting for thirteen years. After her father's career ended in a way that makes her feel somewhat responsible, she has tried to mold her career to what he has wanted. When a chance between taking a role he wants for her and one she wants for herself, with some added family legacy drama, things come to ahead.
(Jamie) Ford-Griffin has been trying to keep his family and their ancestral home afloat. When his brother comes to him with another seemingly harebrained idea, he despairs even more. His family and Freddy's have some history and her father is currently blocking a project he needs to go ahead for income but there is something about Freddy's warm exuberant personality that calls to his normally grumpy taciturn self.
It's an Austen house party full of drama, intrigue, villains, and falling in love.

It was a truth universally acknowledged that an actor in a rut must be in want of a spot of murder, mayhem, and true love.

If you've read the other three books in the London Celebrities series, you'll remember glimpses of Freddy and Jamie. This works as a standalone but one of the author's strong points is how well she writes an interconnected world. She immerses you in these character's lives and surrounds them with believable friends, family, and outer issues. I did feel at times like Freddy and Jamie's romance got pushed to the side in favor of the overall picture but I still felt their romance and believed in it. The story can be said to be a two villain piece, a co-actor of Freddy's and her father, I think the co-actor could have been cut (she does play a part in pushing the family legacy drama) in favor of declogging or making more breathing room for Jamie and Freddy. Every other secondary character I thought was perfection in enhancing the story and our main characters.

There were few people he would ever really know, see as they were and not through a hundred different filters of perception. When he touched Freddy, when he looked into her eyes, he felt as if he was starting to see her. It was sexual, it was physical, but it was also the tentative stirring of a connection that he couldn’t explain, couldn’t put into words even in his own mind.

As I mentioned, the outside events of Jamie having some family and financial struggles, Freddy straining against her dad's wants for her in favor of her own, the live play production, co-actor villain, and the family legacy drama, sometimes took time away from Freddy and Jamie. However, these two bonded together beautifully and Jamie gives one of the best declaration/love speech I have read; the truth in it outshone any sexy, sappy, or overly sweet speech we otherwise may have gotten. These two got each other and I reveled in how they spoke to each other and bonded.

I also loved how Jamie's relationship with his brother Charlie played out on page and how Freddy and her sister went through their ups and downs together. I thought Freddy's relationship arc with her dad was given a bit of an easy ending, there was a lot to wrap-up at the ending and I think this got shortchanged a bit. The author seemed to be teasing future books with Freddy's sister and a professional rival (the rival's ticking jaw during their live broadcast, y'all) that I will be showing up with bells on for.

She pressed her palm to his cheek. “You make me feel equal,” she murmured slowly, and he rested his forehead on hers.

This author has a writing style and tone that sucks me into her worlds and makes me believe in and feel her characters, I highly recommend her and this series. I did think at times the romance between the leads was overshadowed a bit at times but I enjoyed what was doing the overshadowing, part of the family legacy drama involved a secret forgotten romance (Violet and William) that had my eyes watering. If looking for a contemporary romance to sink into, this book and series will have you lost in the characters and world.
27 likes · Like ∙ flag
Sign into Goodreads to see if any of your friends have read The Austen Playbook.
Sign In » 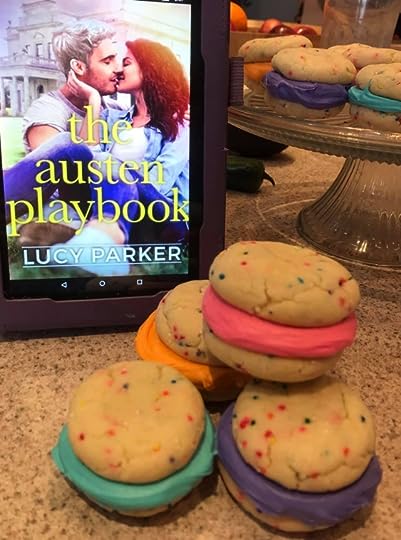 Thank you, hope you enjoy it if you get a chance to read :)

Great review. 😊 I'm glad you enjoyed the book. I'm just about to start it and I'm now pretty excited to read it too. 🙂

Thanks, I hope you enjoy it as much as I did! It is not an immediate snap grab but a sink into. I love the character world building this author does. Will be on the lookout to see what you think :)