Melanie's Reviews > You Must Not Miss 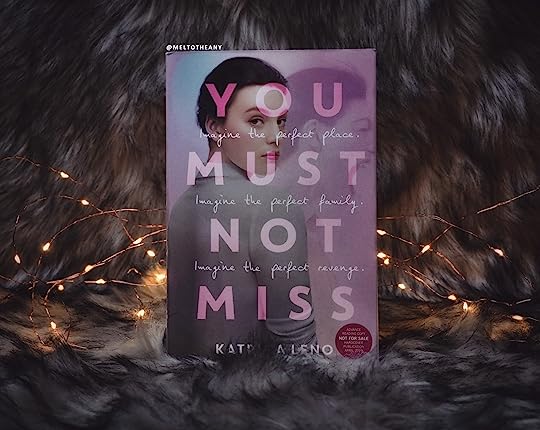 ARC given to me by my amazingly kind friend - Kayla! at Books & Blends!

“You felt so deeply, and for so long, that your very sadness grew limbs and walked away from you. You have moved mountains, Magpie Lewis, and you are only just getting started.”

Katrina Leno is truly a gift to this world, and I’m not sure what the world has done to deserve her, her words, or her stories, but I’m forever thankful. You Must Not Miss is a masterful expose on rape culture and the things that everyone is willing to do instead of believing girls. And this is one of the best things I’ve read all year.

You Must Not Miss is a story about a girl named Magpie who is a sophomore in high school, lives in a small town called Father in New England, and whose life has drastically changed in the past three months. The abandonment in this book actually hurts my soul to think about, but basically Magpie first found her father cheating, and then something horrible happened to her, and then her father left, and then her best friend left, and finally her sister left. Magpie is now living alone with her mother, who is an alcoholic and unwilling to contribute anything to the household. And, friends, Magpie’s grief tries to be so silent, but you will be unable to hear anything other than its loudness, and it’s one of the most heartbreaking reads I’ve endured.

But when Magpie discovers a portal to a new world called Near, where she controls what happens to everyone, she starts to carve out a little bit of her own happiness. And she even finds a new friend, named Hither, who helps her learn about this new world and the abilities at her fingertips.

Yet, we also get to see Magpie’s reality, trying to go to a high school where people hate her, and trying to navigate the halls to ignore someone who was her best friend for all her life. Someone who she loved unconditionally. Someone who knows the truth and refuses to believe her. But we also get to meet some of Magpie’s new friends who have also been ostracized; Clare, who is carrying her own grief, Brianna, who was humiliated once over something natural that she couldn’t control, Luke, who is bisexual, and even the start of a something more than friendship with a trans boy named Ben.

My full trigger warnings will be at the end of this review, but I am going to talk about sexual assault in this review, so please use caution and make sure you are in the right head-space before reading any further.

“I’ve thought an awful lot about how many times a girl has to say no before a guy really believes her.”

This book is a big fuck you to rape culture and I was living for every single word on every single page. People don’t even want to believe girls when they know it’s the truth, and that’s the saddest fact of them all. Sexual abuse and rape culture are normalized every single day, and every time some ignorant person talks about how much the victim drank, what the victim wore, what position the victim put themselves in, even how many times the victim said yes before saying no. When none of that matters, rape is rape, regardless of any light you want to shine on it to make excuses you use to try to put the blame on the victim. And, again, this only helps to normalize the horrible things people are justifying doing because powerful people prove that they are able to get away with committing these horrible acts over and over again. And it’s just going to continue if we don’t commit to breaking these horrible cycles.

There is just so much good in this story, and it’s heartbreaking, truly, but it’s such a real heartbreak that so many of us will experience, while so many of us wish for our own Near to escape into. While talking to my friend Madalyn, she said that Summer of Salt is a quiet book about rape culture, where You Must Not Miss is an extremely loud take on, and that’s honestly the most perfect sentence in the world to describe these two books that I gave five stars to. Because sometimes you need to yell when you live in a world that does everything to prove over and over again that it doesn’t want to believe you.

Lastly, this story, and the way it is told, also is loosely inspired by “One for Sorrow”, and a genius interpretation that Katrina Leno gave us of it. From the title, to the chapter headers, to secrets that are never to be told. Like, I stan a creative genius who renders me speechless, because holy shit did Katrina Leno execute it perfectly.

Overall, I’m going to be really honest with you; this ending is a wild one. I can see a lot of people loving it completely, and some not liking it at all. This book has so many speculative elements, and I adored it with the sum of my being, but I know that that isn’t for everyone. But this book just meant the world to me, and it was so powerful, and so thought-provoking. Truly, me and my friends spent hours talking about the ending of this book, and it just made me cherish the book even more. And I promise, I’ll carry this story and Magpie in my heart forever.

Sign into Goodreads to see if any of your friends have read You Must Not Miss.
Sign In »

Awh! Thank you, Coco love! I hope you're having happy reading, sweetheart! 💗xx

Looove your review. 😍 I'm hoping to read my first book by Katrina Leno soon, but gotta add this to my TBR for sure. 😊

Amazing review, love! 💖 Definitely adding this one to my TBR 😊

I'm really going to have to prioritize this one in the next couple of days....

Warda wrote: "Looove your review. 😍 I'm hoping to read my first book by Katrina Leno soon, but gotta add this to my TBR for sure. 😊"

Maja wrote: "Amazing review, love! 💖 Definitely adding this one to my TBR 😊"

Awh!! I hope you love it, beautiful! 💖xx

Kendall wrote: "I'm really going to have to prioritize this one in the next couple of days...."

I hope you love it, Kendall! Happy reading always! 💖xx

Wonderful review! I haven't heard of this book until now. Thank you for putting it on my radar. :)

This sounds like a fantastic book but I am having a hard time with the idea of a character named Magpie. Why?!

Kristy wrote: "Wonderful review! I haven't heard of this book until now. Thank you for putting it on my radar. :)"

Awh, thank you for these kind words, Kristy! I hope you're having happy reading! 💖xx

Thank you so much, Deanna love! 💖xx

Holly wrote: "This sounds like a fantastic book but I am having a hard time with the idea of a character named Magpie. Why?!"

Hahaha! I feel you, Holly. It's a nickname but I get it. 💖xx

LostKnight wrote: "Thanks for this really good review. I deeply appreciate your looking out for victims."

Awh, thank you for your kind words. I hope you're having happy reading! 💖xx

Great review, Melanie! I love how you didn't sugarcoat the traumatic experiences these characters have to go through while being so delicate towards the victims. ♡ ♡
It sounds like a book that shouldn't be missed, lol (sorry but not so sorry)

Lau wrote: "Great review, Melanie! I love how you didn't sugarcoat the traumatic experiences these characters have to go through while being so delicate towards the victims. ♡ ♡
It sounds like a book that sho..."

Thank you so very much, Lau! I hope you're having the happiest of reading. And... I laughed out loud... hahahaha! 💖xx

I love that this book is your friend’s gift AND you loved it!!! A great win win!!!!

Can I get an inspirational book

Elyse wrote: "I love that this book is your friend’s gift AND you loved it!!! A great win win!!!!

thank you so much, sweetheart. i miss you! 💕