WhiskeyintheJar's Reviews > Fix Her Up

They could be friends, him and Georgie. That’s what was wrong. He didn’t want one—especially her. She was too young, too positive, and too related to his best friend.

Starting off the Hot and Hammered series, Fix Her Up is a perfect sweet and hot summer read. Georgie has been in love with her brother's bestfriend Travis ever since she can remember but has never been able to get him to see her any other way, she can't even get her family to see her as an adult. When Travis comes back to his hometown, Georgie can't stand seeing him depressed over having to retire from baseball because of an injury and decides to try some tough love.
Travis' father always said he'd never amount to anything and even though he's won the World Series, Travis is back right where he started. After living the flashy life as a star baseball player, Travis is struggling with who he is now. His bestfriend Stephen's little sister is pushing him to put the bottle down and clean his apartment and all the while Travis can't stop thinking about how sexy she has become.
Georgie and Travis are sick of being stuck in a box and so they make a plan to fake date to get people to see them a different way, but there will absolutely be no real feelings, nope, nope, nope.

But the more she got to know Reality Travis, the more Fantasy Travis started to fade, leaving this real, breathing, complicated man in his place. He appealed to her even more. So much more.

I thought this story was an absolute delight, a perfect summer read. Georgie was a combination of sweet, goofy, determined, and vulnerable. She works as a party clown, which doesn't help getting people to see her as an adult, and wishes her family would see her more than the “baby” of the family. I thought the author did a good job moving Georgie from childhood infatuation to getting to know Travis on a deeper level to make her love for him seem more solid. Georgie finds Travis sexy and grew up starry eyed over him but as she deals with his grumpiness, depression, and abandonment issues, the reader can see a stronger foundation start to grow.

Travis was the perfect amount of grumpy and soft towards Georgie, he's never blatantly mean towards her and I delighted in seeing him starting to crack against his will. He's about five years older than Georgie, so he was off playing baseball when she grew up and when they meet up again, he firmly tries to put her in the no touch little sister friend zone. He fails at this and it is not only because he finds her attractive but because she reaches him and connects with him in a way no in his life ever has.

Travis and Georgie's chemistry, rather it be friendship or sexual, popped off the pages and I loved every second they made me smile or sent a tingle down my spine. There was a little bit of abruptness to their first sexual encounter and from there, it's on with these two. You'll get a kissing in the rain moment that morphs into a Georgie on her knees in a dugout, along with some other heat inducing scenes. For a sexy summer read, I thought there was a good balance between sex scenes and relationship building; the author doesn't completely abandon the emotional aspect.

Seeming at odds with himself, he eventually wrapped an arm around the small of Georgie’s back, tugging her into the warmth of his chest. “A few minutes won’t hurt,” he muttered, seemingly to himself.
She nuzzled into his chest hair to hide her smile.

The fake relationship plot doesn't happen until a little later in the book and you kind of have to just go along with it for the sake of the story. There was also a mini-subplot mainly involving Georgie, her sister, sister-in-law, and a friend where they form a “Just Us League”, a group of women supporting each other to accomplish their dreams, that came off a bit series baiting. It was a way to introduce and get to know some secondary characters that will probably get their own stories later on. It wasn't intrusive and actually added some nice women bonding time while flushing Georgie's character out more but it was also obvious as series baiting.

I thought Travis' relationship with Stephen could have been shown more and the issues he had with his parents definitely was missing some depth but even though Travis and Georgie's relationship moves a wee bit quickly, they still felt true. There were times were it came close overly focusing on Travis being so much more experienced than virgin Georgie but stopped shy of being harped on. These two were there for each other and the way Georgie sunshines her way into Travis' grumpiness, “forcing” him to commit some seriously sweet actions was at turns adorable and sexy.

This girl could make a man crawl and had no idea.

The ending wrapped up far too quickly, in regards to a last minute mess up by Travis and having no epilogue. However, thinking of Travis and Georgie embarking on their new adventure together, left a smile on my face. I'm also dying for Rosie and Dominic's story, a highschool sweetheart couple that has lost their connection, there is a scene between the two that will have everyone turning into a thirst factory for their book. As a summer read Fix Her Up excels, sweet, vulnerable, hot, and oh so sexy.

She’d set out on a sneaky mission to make Travis believe in himself, but he’d slowly been doing the same for her. They’d been doing it for each other, hadn’t they?
33 likes · Like ∙ flag
Sign into Goodreads to see if any of your friends have read Fix Her Up.
Sign In » 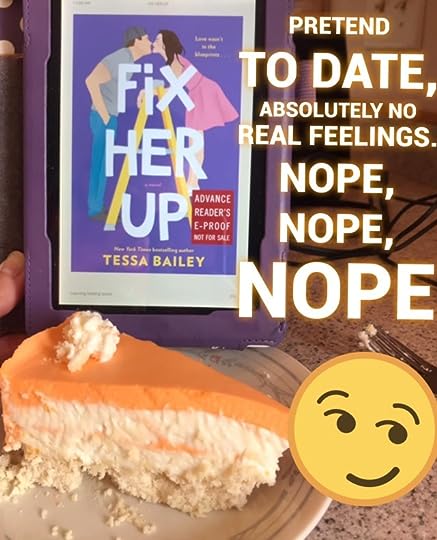 I don't know if it because the MN Twins are having a great season or the fact that this is hitting my personal sweet spots - little sis/bestfriend, grumpy guy/sweet positive woman, a little goofy/a little emotional, but I had to force myself to shutdown my Kindle last night. #GrumpySweetness"


Y'all, this is the perfect summer book, sweet and sexy as hell. This is probably going to get close to 5 stars from me.
Think Hate To Want You but way lighter on the emotional angst & family drama, more cuteness."

Excellent review!!! You sold me on this one. I was on the fence but the combination relationship building and sexy scenes (and the emotional aspect is an added bonus) pushed me over to the read side.

I hope you enjoy it as much as I did! I thought it was a perfect summer read, emotion but not angst-y, sweet, and hot sexy times.

Thanks, Kat! Hope you’ve had some five star reads lately, too!

HOOOOLY SHIT .... okay, so i’ll Read this tomorrow then

I know, definitely not the usual type of book that would garner such a high rating from me but oh man did it hit some personal fav tropes. The heroine was so sweet goofy and the hero was so grumpy soft that I delighted in them. Whomever decided to release this in right at the beginning of summer is a genius, perfect summer read.
I hope you enjoy it as much as I did, can't wait to see what you think!

Great review, glad I read it, though I seem to have a very opposite feeling in everything but kisses in rain

Oh yeah, I just read your review and definitely different feelings on it, lol.
It's like a The Hating Game reversal.

Excellent review and I am looking forward to reading this soon.

I exactly thought of the Hating Game, particularly in our tolerance of the hero and being immature jackasses. Joshua worked for me, I keep him. Travis is up for grabs. If I don't know him in the balls first.

Although... I'm in love with the whole mantle montage. I wish the book had been a little quieter like that.

*knee* him in the balls.

@Vashti - Thanks! I hope you like it as much as I did, definitely a summer fling romance reading experience :)