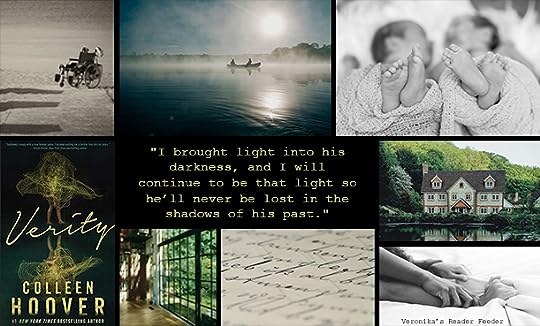 I like it when an author dares to step out of their comfort zone and Colleen Hoover's amazing writing style made it impossible to put this book down.

It’s a ghostwriter story about an author, who is hired to finish a famous book series after the original author, Verity Crawford suffers main injuries during a car accident, why she probably won’t be able to write in the future. Lowen has to spend some days in the Crawford residency while she goes through all the notes Verity left about the series, but she doesn’t expect the things she finds during her stay...

The story was brilliant and the creepiness of it deserves an A+ for sure, but I admit that I expected more action and a bigger twist at the end. It often felt like some of the elements of the book were in there only for the sake of the creepy factor which seemed a little false this way. I think the most genius stories are the ones where every single detail is a part of a bigger picture. I simply don't like it when some parts of a book or a movie are in the story only because at that moment the author felt like that something creepy must happen in that particular scene which we can forget about later. It's like trying to push a puzzle piece from another box into the picture, but of course that piece won't fit even if it has similar colors. For example, (view spoiler)[ it bothered me that neither the sleepwalking thread nor the basement scene was significant later, just as the fact that Jeremy knew Lowen, not to mention their strange first encounter, and somehow Crew's character was also a little confusing for me. (hide spoiler)]

The ending felt a little rushed and I didn’t find it daring enough.  For me this was an ’okay ending’ not the ’I will throw my Kindle out of the window’ kind that I expected. (view spoiler)[ I think the real mindf*ck would have been if it turns out that Jeremy is the real psychopath. To tell the truth I thought that this would be the big twist, because it seemed so strange how they met and again there was the fact that Jeremy knew who Lowen was (at least from her name), he read her novel and he still pretended that he didn’t know her. And then again, nothing happened with this thread either... This is also something that I didn't like. (hide spoiler)]

To tell the truth one of the reasons why the ending of the book wasn't shocking for me, because (view spoiler)[ in this form I really have no doubt that Verity was really a psychopath, and her last letter was only a manipulation. Simply because I think that no one can pretend such a condition without some kind of a psychological disorder. Plus I think Jeremy would surely have recognized some details in the book that didn't happen in reality. And why didn’t Verity write an Author’s note for the book if she intended the book to learn from? Somehow the picture is not whole for me this way… (hide spoiler)]

I'm one of those few people who can’t see this book as a movie, mostly because I can’t really imagine how could they properly show the content of Verity’s manuscript and especially her twisted thoughts. For me this was the creepiest thing in the whole book, not the other events in the story.

Overall, it wasn't perfect but it was good and even genius as a "genre-debut" novel. I admit that it may not have been a good idea to finish this book at night, because after that my dreams were far from sweet. :) I was hesitating between 4 or 4.5 stars, but finally I gave 4.5 stars for this book because it was really good at first try in this genre and until the conclusion, I was pretty sure that it will be a 5 star read for me.

Overall, it wasn't perfect but it was good and even genius as a "genre-debut" novel and I highly recommend it.