it was amazing
bookshelves: arc-books

When true love and passion is at stakes, Jaime and Marcus must learn how to know when the right time is the right time and that hiding their true feelings is inevitable... 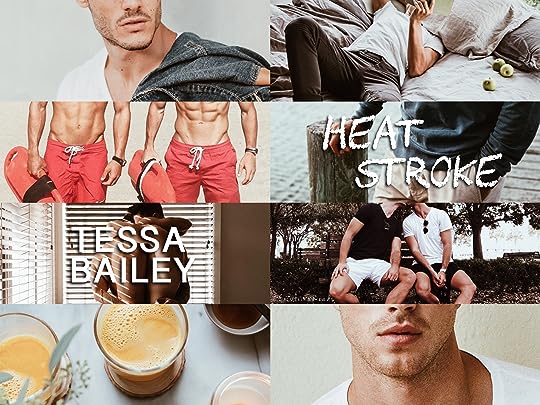 Everyone who knows me, knows that I am the biggest lover that is anything by Tessa Bailey. Already I have read two of her newest upcoming novels this year, and they never stop being as incredible as the last. This was my very first MM romance and I am beyond glad that I did not miss out on it. I mean, how can I possibly do that? We first met Jaime and Marcus back in Mouth to Mouth, Rory and Olive's story. Yet another novel created by the mastermind that is Tessa, she brings these two characters in which when I first read about them I knew that there was spark and love there. And having a story for Jaime and Marcus is something that I am so enamored of the idea, and the actions Tessa decided to take. And after reading their story, I can officially say that I have popped my MM cherry ;)

Jaime and Marcus, as previously mentioned, are brought up in the first installment in the Beach Kingdom series. When you first encounter them, you know that they have this friendly yet witty banter to them that you are instantly drawn to and are curious about. Jaime, a high school teacher whom during the summers helps out his brothers at their nearest beach (which by the way, I live like twenty minutes away from because the novel takes place in the same island that I live in) and local bar that they own, is this open man about his sexuality un-like many rugged gay men that I have heard or known of. He doesn't flaunt around about his sexuality, but he is not ashamed to admit it either. That's when Marcus comes into place. Marcus, a lifeguard at the beach Jaime works at and a bodyguard at the Prince's bar, is indifferent about his sexuality. But he is not indifferent about the feelings and obsession he has for Jaime Prince. He knows that this obsession he has towards Jaime, is not something that he has ever felt before. But once he has a taste of Jaime, that obsession becomes an addiction that he must strive to have every day for the rest of his life;


"Yet he continued to be drawn to Jaime like a bee to the most beautiful flower in the garden, taking advantage of the nectar, the nourishment he got from being close to Jaime. He was like an addict who couldn't;t resist the pull of one more hit. One more hit..."


Jaime has to be careful about his feelings towards Marcus, as he does not want to be in yet another dilemma like he was before with his previous partner. Jaime's past is what makes him an appealing character making you crave his story and much more. Being hurt both physically and emotionally in the past, Jaime knows that dealing with someone who is confused about his sexuality is drawing up dangerous lines for him. But those feelings that he has been harboring for Marcus cannot be denied and cannot be pushed away. He knows that his love for Marcus is not something that can be played around. Jaime is willing to put his doubts to the side and give Marcus a chance. When hearts are broken and the truth prevails, Jaime and Marcus must learn that being without each other hurts more than hiding in secret;


"I was going to say you can keep my heart in a cage. But the truth is, I think it was in a cage before. Before I let myself love you," Jaime said, his throat working. "You turned the key and let it out. Now it feels... like it has so much more room to beat. Like it could keep growing forever because you're around to fill it up..."


As my very first MM romance, I can say that I am a true fan now. But, that does not give out the idea that I will be reading more MM romances. I am still very hesitant about it the sub-genre, not because of the sexuality topic, but because I have always been a fan of FM romances. I have nothing against the LGBT community, so I will take this new sub-genre to me with a grain of salt. Overall, I am blessed to have read this beauty and that Tessa has created a new story that will have you panting, sweating, and wagging your invisible and horny tail for more!

ARC kindly provided by Tessa, in exchange for an honest review...

This is on my list for tomorrow. This is my first MM read as well, so I've also been a bit hesitant. After reading this review, though, I'm a bit more excited.

L.H. wrote: "This is on my list for tomorrow. This is my first MM read as well, so I've also been a bit hesitant. After reading this review, though, I'm a bit more excited."

YEAHHHYYY! Hopefully you end up enjoying it hon! xoxo

Your first MM. I'm so proud of you!!
Terrific review darling ❤️

Thank you so much Ari, keeping my fingers crossed you end up enjoying it! xoxo

I FEEL LIKE A BRAND NEW WOMAN! I HAVE BEEN POSSESSED BY THE MM WORLD! hahahaha!

Thank you so much my queen! xoxo

Great review, Cristina! Glad it was a winner 😊

Thank you so much Alex, this was just such a massive surprise filled with love and amazing words! Loved everything about it! xoxo

Thank you so much Kat! xoxo

Chelsea wrote: "Great review, Cristina! Glad it was a winner 😊"

Awww thank you Chelsea, it sure as eck was ;) xoxo

Thank you so much E! xoxo

Terrific review Cristina! Can't wait to read this one! :) xx

Thank you so much my queen ;) xoxo

AHHHH! Thank you so much babe! That means so much to me! xoxo

Thank you A! Keeping my fingers crossed you enjoy it as well! xoxo

Thank you so much Mel, this book was way too delicious to be true! xoxo