WhiskeyintheJar/Kyraryker's Reviews > It's Getting Scot in Here

Before she could face forward again, he caught her gaze with those impossibly light-green eyes of his. “Too late. I’m already charmed, adae. Whether ye dunnae wish me to tell ye so or not.” And she was charmed, as well. If only he’d been the oldest MacTaggert. If only her mother wasn’t mad for a title in the family. If only, if only, if only.

Wild Wicked Highlanders is a new series by Enoch involving an English woman who married a Highlander, found she missed London and when the shine comes off their whirlwind romance, their combined stubbornness had her taking her baby daughter to live in London and leaving behind her three boys. Seventeen years later, with only a handful of letters exchanged, the sons learn that their father signed an agreement stating that his sons have to marry, Englishwomen at that, before the daughter, with their mother directly picking at least one woman for one son or their mother can cut off funding for their home. The three sons angrily travel to London after learning their sister is engaged, thinking they'll be able to intimidate anything English to get out of the mess. Once arrived, they learn there is already a contract drawn up for Coll, the eldest, to marry an Englishwoman named Amelia-Rose. Coll, not used to being in control or getting his way, turns into a beastly Highlander and leaves his youngest brother Niall, the peacemaker, to smooth things over with Ameila-Rose. What follows is an insanely romantic at times, complete journey between two people just wanting to love one another.

And then he’d said that he found her charming, which had kept her awake all night.

At well over 300pgs, this was a little longer than romances have been clocking in lately and it showed, for the better. I was a little nervous about the engaged to one brother but falling in love with another but even though it was a little awkward in the beginning with how the author kept Coll out of the picture, and he'll have to work extra hard in his own book to make me forget how immature and rude he was in the beginning, I was all-in for Niall and Amelia-Rose's romance. With a higher page count, the author had the time to bring the reader in, this means I felt introduced and had a stable footing to grow to know the characters and immerse myself in their thoughts and feelings. There is a quick spark between Niall and Amelia-Rose but they obviously can't act on it right away, there was an actual getting to know, gradually appreciate, and bonding between the two. This made the second part of the book and ending so much more emotional for me, I believed in them.

Time to begin again. And this time, he’d be wooing the lass for himself.

Niall was a sexy sweet hero, he really shined because of the contrast with his older brother and his antics but the way he listens to the heroine and his self-assured “I am what I am” in the face of London superiority complexes was greatly attractive. I really liked how the author handled the tangled weave of him falling in love with what is supposed to be his brother's betrothed. There's no emotional connection between Coll and Amelia-Rose but Niall stills try to respect it, which gave us some great barely leashed restraint. The first half is spark and getting to know while the second half is desire, longing, and learning. Niall turned out to be a ridiculously lovely hero, you're going to swoon over him.

No one had ever called her stubborn before, except for her mother, and Victoria had meant it as an insult. Stubborn meant she had a backbone, and a lady wasn’t supposed to have one of those.

Amelia-Rose was a heroine who I grew to really like over the course of the story. It was refreshing to have a heroine who unapologetically enjoyed London society, the parties, friendships, and culture. She had some preconceived notions about the Highlands and Highlanders but she was willing to listen and get to know. She felt real to me, from her trying to constrain herself so she didn't feel society's backlash, looking to marriage as an escape from her parent's home, and to her being so scared to fall and give into her love for Niall. She's young, nineteen, and I know women will have their heart break a little bit for the woman she is told she must be and the woman she wants to be. Consequences, losses, and gains were beautifully articulated through her character.

She followed the rules of propriety as best as she could, but his lass did have a wicked streak.

This story could have been 500 pages and I don't think I would have complained. I would have liked to have seen Amelia-Rose interact more with people she considered friends, a little more time, depth, exploration into the three sons becoming more open to their mother, and the four siblings having more interactions. This is a series though and I imagine the author is saving some of those emotional moments for future books, I just enjoyed this world so much. I can see some maybe thinking the story gets a little slow in the middle but if you lean into, the emotional payback will be greater at the end, and this was a little bit less sexual than has been coming out in historical romance lately. I, personally, enjoyed the focus more on the emotional personality bonding, longing, and working/fighting for a relationship but I can see some wanting a few more sexually hot scenes. The author took the time to craft a relationship between her leads and I greatly enjoyed losing myself into Niall and Amelia-Rose's romance for a while. I can't wait future books in this series.

“Because of you, I am me.”
45 likes · Like ∙ flag
Sign into Goodreads to see if any of your friends have read It's Getting Scot in Here.
Sign In » 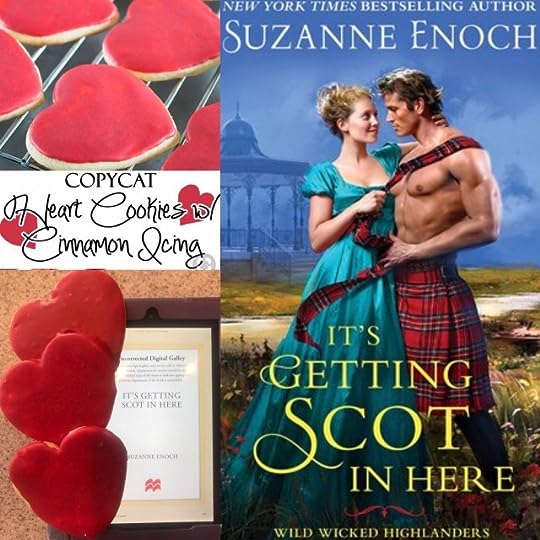 Great review ! : )
I actually miss the longer historical romances, because most of them tend to have greater depth of storytelling and more convincing world building/historical background information.

Great review! I've been eyeing this one. Glad that you enjoyed it so much. :)

@Ivy - Me, too! Some of the older bodice rippers went on wild, not great rides but the world building was amazing. I want to be immersed in the world and that takes time and depth.

@Dorine - I really think the title is misleading. It makes it sound like the story is going to be fluffier and sexier vibe (nothing wrong w/ fluffy, lighter stories) but this turned out to be more gradual moving, deeper, and way less sexual situations than what historicals have been coming out with lately. Really curious to see what you think if/when you read it :)

Thanks! It was a great start to the series.

Wonderful review and appreciate more emotional and developed loved story. And nice that it's a longer read with a more historical and developed story line. I'm sold!!! Thank you.

@Jan - I'm a psycho, lol. I'll half star but this was just a bit closer to 4 stars, so I couldn't help myself. I read so much romance I can't help but want to work at distinguishing rankings. This is why I can't talk books w/ non-book people. The obsession with noting this wasn't quite a 4star read but better than a 3.5 for me, is too scary.

@Esther - I'm really excited for you to read this, I hope you like it as much as I did. Can't wait to see your thoughts on it!

@Cherie - Yes! I think you're really going to like the hero and how he interacts with heroine. I can't wait to see what you think when you get to read it :)

All those differences sound like something I'd really enjoy. I'll let you know when I get to it. :)

@Dorine - Yay! When I was reading, I kept thinking of all the friends on here that have been struggling with newer historical releases and wanted to spam them all with “Check this one out!!” messages, lol. Here’s to hopefully my different strokes matching up with yours :)

Terrific review! I love that title!!😊

You can spam me with suggestions anytime. I trust your recs. :)

@Julie - The title almost scared me away, lol! I thought it might be a historical lite and more sexytimes than what I was looking for. I feel like my friend's list is divided on the love and hate of these types of titles.

I’m a hate on these types of titles. They are so gimmicky and show no creativity. The cover, though...that’s another story! Literally.

Yep, the playfulness between the couple on the cover had me giving this a chance :)

I forgot about noting the female friendships but I really did enjoy how supportive all the women were towards each other in the book.

We do need them to at least put the half star as a clickable option. I spend way too long debating whether my half stars for 3.5 should be a 3 or 4 star in that section. Lol should this be a high half or a low half is a weird question to ask yourself.

Fantastic review! Agreed with every aspect!

Thanks! Can't wait for the second in the series to come out